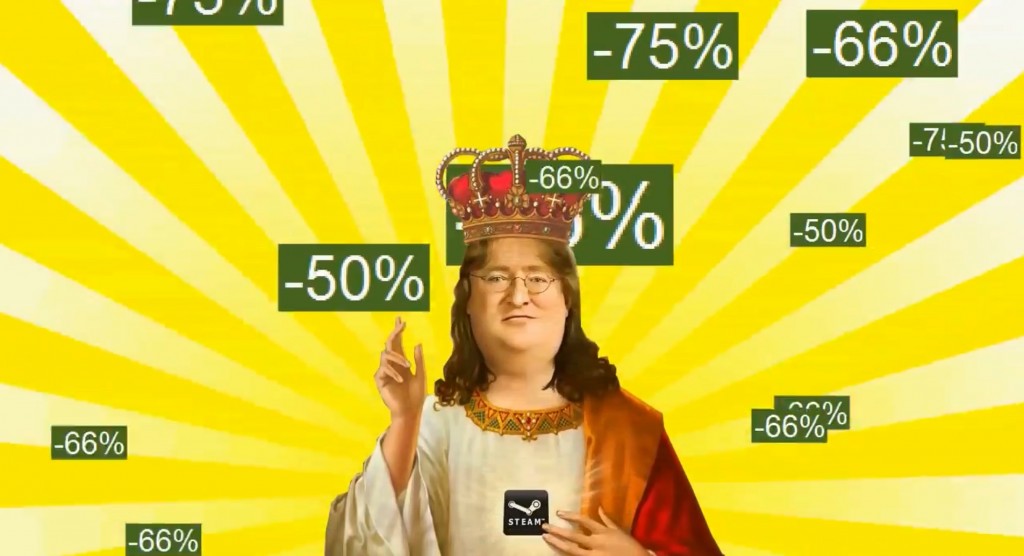 If you’re like me then you probably view each Steam sale with simultaneous hope and dread. On the one hand, you can’t wait to add some more games to a collection that is already far bigger than it should be and but you also dread the state of your bank balance by the time it’s all over.

With every Steam sale comes a gimmick and the Summer sale that is currently under way is no different. As well as being offered the kind of game prices that could make console owners weep, everyone can join a randomly selected team and has the chance to win the top 3 games from their wishlist. Team scores are based on their member’s collective points and points are earned by forging badges from trading cards, including the limited Summer Adventure cards that are won by completing challenges at the moment.

The Steam Community Marketplace offers players further opportunity to buy and sell these cards and speed up the badge forging process. In fact it is virtually impossible in most cases to collect all of the cards needed to forge a badge without resorting to buying them. The Summer Adventure cards are among the hottest selling items on Steam right now but a quick look on the Marketplace suggests that they are still falling behind one item in particular on the popularity scale. Namely, that item is the Mann Co. Supply Crate Key for Team Fortress 2.

As Steam’s most played game it stands to reason that the keys which grants access to all manner of insanely valuable guns and hats would always remain a hot commodity however a look at the frequent buyers and sellers of these items proves that something much more interesting may be going on behind the scenes. In short, a large number of Crate Keys aren’t actually purchased for in-game use at all but instead are used as trading currency in what has become a highly lucrative and popular underground market. 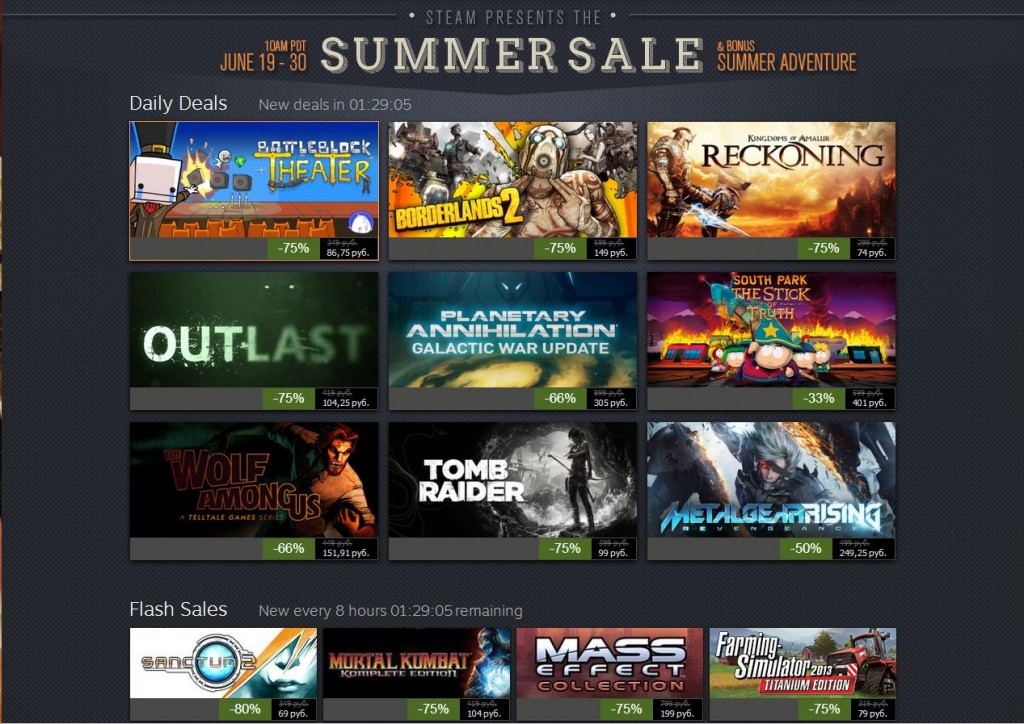 Simply entering the correct key combinations into a browser shows Western players some of the heavily discounted prices available to other regions. E.g. South Park: The Stick of Truth currently costs approximately £6.90 in Russia and parts of Eastern Europe.

Regional game pricing has been a hot topic for years now. Europeans have always complained that Americans get the best deals, Australians have always moaned about paying much higher prices than Europe and developing markets and small countries have had to pay through the nose due to unofficial local retailers and insane tax regulations.

However, with the growing might of digital sales, regional prices have faced increasing scrutiny and subsequently have become much easier to bypass. Although the industry often cites local wages and costs of living as a reason for disparity, it is becoming much harder to justify why the same game costs twice as much as in the UK as it does in America. Savvy consumers throughout the world have naturally looked to exploit the global nature of the internet as a way to get the latest games at the lowest prices.

Although it may seem as though console gaming rules from a western perspective, the PC still remains the top platform in the world due to it’s strength in those territories that have been ignored by an industry that traditionally focused most of its attention on North America, Japan and Western Europe. Although piracy is rampant in areas like Russia and Latin America, Steam have been among the first to coax gamers in these areas by offering them incentives to stay on the right side of copyright law.

These incentives take the form of game prices that would be nearly unthinkable in the West, with prices averaging approximately $20-30 for the latest major releases. When more publishers looked to Steamworks as a way to DRM protect their games a few years ago, a lot of online stores emerged offering email delivery of Eastern European CD keys that could be redeemed on Steam from anywhere in the World and retailed for a fraction of normal retail price. This method of purchasing PC games has grown massively since then and because retail PC game discs are now next to useless, third party key sellers provide an extremely cost efficient way to get the newest PC games without resorting to piracy. 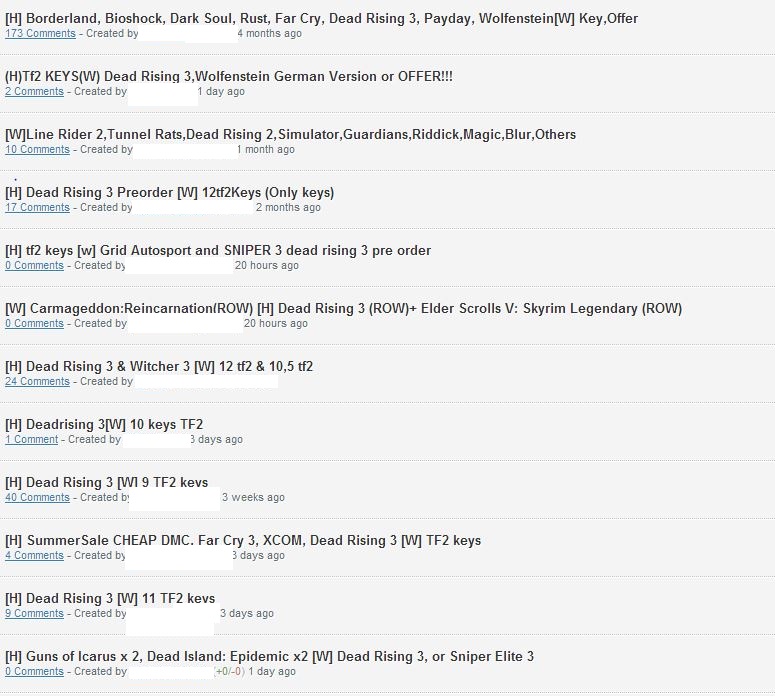 Browsing the right forums will unveil Steam versions of games like Dead Rising 3 and The Witcher 3 for sale at a fraction of the normal sale price.

Of course, Steam soon figured all of this out and offered concerned publishers the opportunity to region-lock their games using a system that others like Origin have since replicated. Unlike the traditional Europe/Americas/Asia system adopted by console platforms, Steam lock games simply by separating Eurasia (RU/CIS) from almost everywhere else on Earth (ROW). Although this slowed the grey market down a little, it was given a massive boost when a built-in trading system was later added to the official Steam client.

Steam have essentially given unofficial resellers the most powerful tool at their disposal and it works as follows. When a game is purchased from Steam, the customer is given the opportunity to either activate it on their account immediately or add it as a trade-able item in their account inventory. That item can then be gifted to a friend at a later date or, crucially, traded as a commodity for other items with anyone else.

In effect, the Crate Keys act as a pseudo-bitcoin and enable sellers in developing economies to securely supply cheap licenses for some of the most valuable games, all in real time and without the risks or costs of PayPal. Most Crate Keys bought from the Community Marketplace are probably never used for their intended purpose but are instead traded and endlessly recycled by those looking for a bargain. As a result, forums are full of seasoned sellers competing to provide potential customers with the best prices. This weekend, pre-orders for Dead Rising 3 were unofficially on offer for as little as £10.60/$18 while the price was £29.99/$51 from the UK store.

All of this constitutes a clear violation of Steam’s ToS and Steam have VAC banned some high profile sellers however the massive and ongoing profit potential means that most sellers will then just sign up for a new account and recommence trading. An Ebay-style reputation system is used to review sellers and confirm whether or not they can be trusted and as such many sellers take customer service very seriously, arguably much more seriously than Valve do themselves at times. Quite what the sellers do with all of the Crate Keys they amass seems to vary, with some smaller sellers using the profit to fund the games they want for themselves and other larger ones reselling them in bulk for cash profit but there does seem to be ‘no questions asked’ mentality within the community and the subject isn’t publicly discussed very often. There have been accusations and suspicions of money laundering made in the past but nothing has ever been categorically proven. 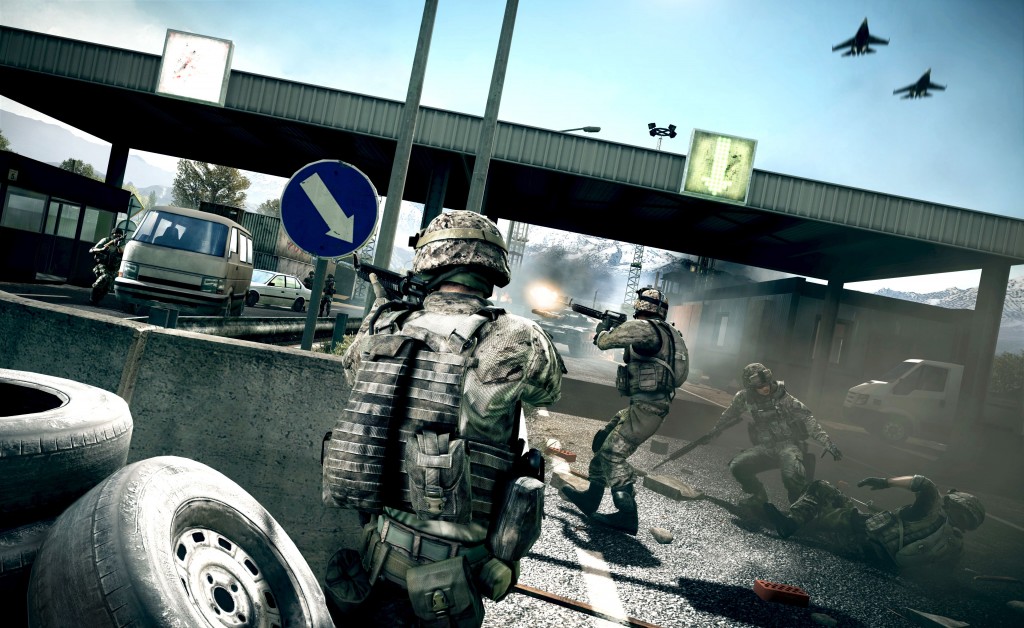 EA severely annoyed customers in India when they increased prices on their local Origin store to prevent cheap sales to Westerners.

“The right man in the wrong place can make all the difference in the world.”

A lot of people have questioned the moral issues posed by this kind of underground trading. When a recent EA pricing gaff caused Watch Dogs to be sold for £15 on the Indian Origin store, many complaints actually came from Indian gamers themselves who argued that greedy westerners were ruining game pricing for them by exploiting pricing holes in foreign regional stores. Their concerns aren’t exactly unwarranted either since EA notoriously hiked Indian Store prices massively after it was found that many westerners were using VPN’s to buy cheap copies of Battlefield 3 in 2011. Subsequently, Battlefield 4 was released at a price of 3,499INR (£38.50) in India whereas Battlefield 3 was only 1,499INR (£16.50) at it’s original time of release. That’s the kind of price hike that European or American gamers wouldn’t stand for but consumers in developing markets are often valued far less by publishers and don’t always have much choice.

Considering the poorer regions that EA and Valve have chosen to tackle first, it is clear that this has as much to do with countering piracy as it does to adjusting prices to fit in with an average salary. Giving a game the kind of $60 price tag that Americans have come to expect simply wouldn’t work in countries where $60 can sometimes be the equivalent of a week’s wages. Selling games at prices that a local population can afford helps to bring them back from illegal downloading or buying cheap pirated DVD-R’s from a dodgy market trader.

At the same time however, discounted Steam ‘imports’ offer the same kind of temptation to western PC gamers who have long been accused of turning to dodgy torrent sites far too often. Clamping down on this kind of activity too harshly is only likely to discourage consumers, especially when they may only have looked to trading as a means to save money rather than to profit. It has long been proven that piracy numbers do not always equate with like-for-like lost sales and in the current economy many are left trying to fund their hobby on a strict budget.

Further evidence can be found in the fact that CD Projekt’s The Witcher 3 isn’t due for release until next February but is currently one of the most popular trading items among the community. Meanwhile, the official distributor Good Old Games offer a DRM-free copy that will likely hit illegal download sites within minutes of the game’s release. This proves that many PC gamers are willing to pay for high quality content, even if they can’t always afford the high retail prices attached to AAA games in developed economies. Most worryingly of all is that Steam store locales are based only on the IP address used for that connection so players who buy a game from their laptop whilst on business in Russia have sometimes found that it no longer works upon their return home and through absolutely no fault of their own.

Finally, the way in which the Steam Community Market operates proves that Valve are still profiting from all of this. Every marketplace purchase includes a small commission payment to both the game’s publisher and to Valve themselves.In the case of Crate Keys, the publisher is Valve so they will be earning in both ways every time one of these keys is recycled via a Steam wallet purchase. As a large number of these keys are only bought from the Market to them be traded with a grey seller and immediately then placed back into circulation, the profit potential for this constant digital license reassignment could be enormous and explains why Valve may seem reluctant to close the cross-regional game trading system completely.

Regardless, despite increased attempts at region locking by Steam that include some morally-questionable retroactive region locking earlier this year, the demand for discounted games continues to thrive and is only likely to get bigger as publishers increasingly turn their attention to emerging countries and online game sales dominate. After all, why pay more when you can pay less?

A proud member of the Geek Pride video games editing team, Sai can currently be found trying to get through his Christmas games backlog (and failing miserably at it).
More Goodness
FeaturesNews