It’s hard to remember a time when platform exclusives were more important than they are now. Whilst the next generation of consoles will battle it out with very little different between them, portable consoles are feeling growing pressure from the mobile space. Once the subject of ridicule aside from the occasional game of Snake on the bus, mobile gaming has taken off in a huge way and today’s smartphones can offer Vita-standard games at a small fraction of the price.

Killzone: Mercenary is this year’s biggest exclusive Vita offering from Sony, promising a sleek big budget PS3 franchise shooter experience that can be played anywhere. Set just after the events of the original Killzone, players assume the role of Arran Danner, a typical gun-for-hire fighting against the Helghast forces for the ISA. What starts as simple clear and rescue mission quickly turns to carnage, leaving Danner at the centre of a battle for control of a chemical weapon. 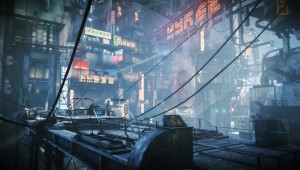 Some of Killzone: Mercanary’s scenery is stunning and puts many PS3 and 360 shooters to shame.

The first and most obvious aspect of this game is that it looks absolutely stunning. As Sony’s flagship shooter, Killzone has often been used to show off their tech but this is definitely the most visually impressive Vita title to date. The lighting is gorgeous, the environments are drawn with intricate detail and the weapons and enemy soldiers look as life like and deadly as their PS3 counterparts.

Somehow the audio design manages to be even more incredible than the graphics. Guns and grenades sound as realistic as you are going to want them to be and the trademark South London drawl of the Helghan soldiers can be heard discussing the games events or calling for a search of the area. All of this combined adds a layer of intensity not often seen on a handheld game and coupled with some great enemy AI can some genuinely nail biting moments.

Ranged weapon attacks will either kill or maim the enemy and the latter can result  in a cry of pain and whimpering as you are begged to finish the job and put the unfortunate soul out of their misery. I actually even felt slightly emotional at one point when a wounded Helghan trooper lay on the floor clutching his leg and sobbed “I was just doing my job”.

As a freelance Merc, the emphasis of the story is on contracts and this remains throughout both the single player and multiplayer campaigns. Injuring or killing enemies will earn credits which are then exchanged for new weapons, armour or special abilities. Any purchases made in the single player mode will carry over to multiplayer and vice-versa but buying new items will require careful thought since taking down some of the larger enemies can be extremely difficult without the right gear.

The weapon selection is large enough to add to the replay value and some of the guns available at the later stages add an unexpected layer of fun and creativity such as the shotgun which ignites an unsuspecting target in a spontaneous burst of flames.

Additional credits can be earned for interrogating certain enemy soldiers or completing Bioshock-style hacking puzzles to hijack systems or steal intelligence. Unfortunately it is here that the cracks really start to show as these puzzles are inconsistent in difficulty and many are so frustrating that they are likely to appeal to only the purest of trophy hunters. To interrogate requires stealth, something which the game actively encourages, but at the same time the stealth mechanics do not really seem up to standard and most attempts at a sneak attack will be met with a last minute about turn and quickly proceeding hail of bullets to the face. 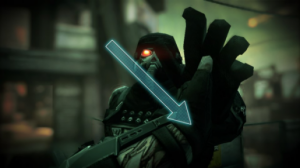 The review version which we received also seemed to contain an above average number of bugs and glitches, most notably related to the AI and collision, and this was after installing a 1.1GB patch which Sony deployed shortly before the game’s official release. Many of the boss battles also felt more cheap than they did challenging and one in particular involved a seemingly weak enemy who for some unexplained reason was able to largely repel gunfire off a two piece suit.

Without a doubt though, Mercenary’s biggest problem is the single player save system. For whatever reason the game does not allow saves to be continued mid-level.  The game’s development team have since made it clear that this was a design choice but there is no doubt that it was a horrendously bad one and is made worse by there are no warnings about this at any time throughout the 5-6 hour campaign.

There are frequent checkpoints throughout the single player missions but these can only be used during a single session and exiting a level will cause all progress on that level to be lost. Having your arse handed to you by an unfair boss fight and fancy relaxing with the multiplayer for a while? Well you can’t really because that will undo your last half an hour of progress so your choices are to either play through the whole mission again or just to switch the console off.

This is a real missed opportunity as the multiplayer is about as good as a portable online shooter could be. The standard three modes of free for all, team deathmatch and capture the flag are there and lend themselves perfectly to the Vita’s tight twin stick controls. The multiplayer maps are all reused levels from the main campaign but most lend themselves well to a multiplayer battle and the game seem to comfortably support up to 8 concurrent players without any noticable performance hit. 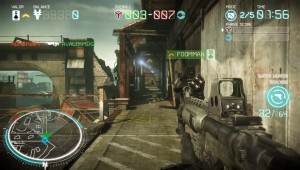 As seen in the recent open beta, this is easily the best multiplayer FPS experience on the Vita to date

The only one issue with the multiplayer mode is that during testing we were occasionally respawned next to an enemy soldier which obviously resulted in instant death. This only happened on a couple of occasions though and could likely be easily patched later on to avoid exploits and griefing.

Sadly Killzone Mercanary is unlikely to be the handheld shooter that starts rapidly shifting Vitas from store shelves. Sony’s best opportunity for that so far was missed with  last year’s epic clusterfuck Call of Duty Black Ops Declassified and whilst the Killzone name is popular with the hardcore, it doesn’t really have the mass appeal to start pulling in the big numbers at retail.

This is a game which manages to do so much right and yet so much wrong at the same time. It doesn’t overly force touch screen or motion controls, looks phenomenal and manages to successfully port a full blown current gen action experience to the small screen. It’s just a shame that a small number of technical issues and poor design choices let down what could have been one of the best handheld games of the year.

There is still no denying however that Guerilla Cambridge have created the most progressive handheld console shooter since Metroid Prime: Hunters on the DS and arguably the best big budget Vita exclusive since Uncharted: Golden Abyss. In spite of it’s failings, Killzone: Mercanary manages to set a new benchmark for the genre which others will now need to follow and proves outright that there are still some handheld gaming experiences that an iPad’s touch screen simply cannot match.