It's good if you have the time and just want to mess around with some familiar super-faces. Patience needed.

Marvel has had a tough time cracking the video-game industry, as it has recently stopped with any tie-in games for it’s franchise (save for the new Lego Avengers game which covers some of the movies between The Avengers and Age of Ultron). In fact, it seems like very recently they have been attempting to crack the App games genre with a few free-to-play (but pay for extra features) games. Their most recent addition is Marvel’s Avengers Academy.

Now, what exactly is there to  offer from this free-to-play game? Well, if you’re playing with an aim to spend no real-world money at all on this game, you get the bare essentials. Which can be summed up like this – a new Avengers team is formed by Director Nick Fury, Odin and Hank Pym to combat the rising stars in HYDRA and AIM Academies. After recruiting Wasp (Janet Van Dyne), Black Widow and Tony Stark, you are free to expand your academy…once you’ve completed certain tasks. Once you’ve reached certain levels you have access to certain buildings, have the ability to reach out to other characters and can progress through the mysterious ‘time fog’ which not so much surrounds the campus, but has invaded it and your job is to push through it. 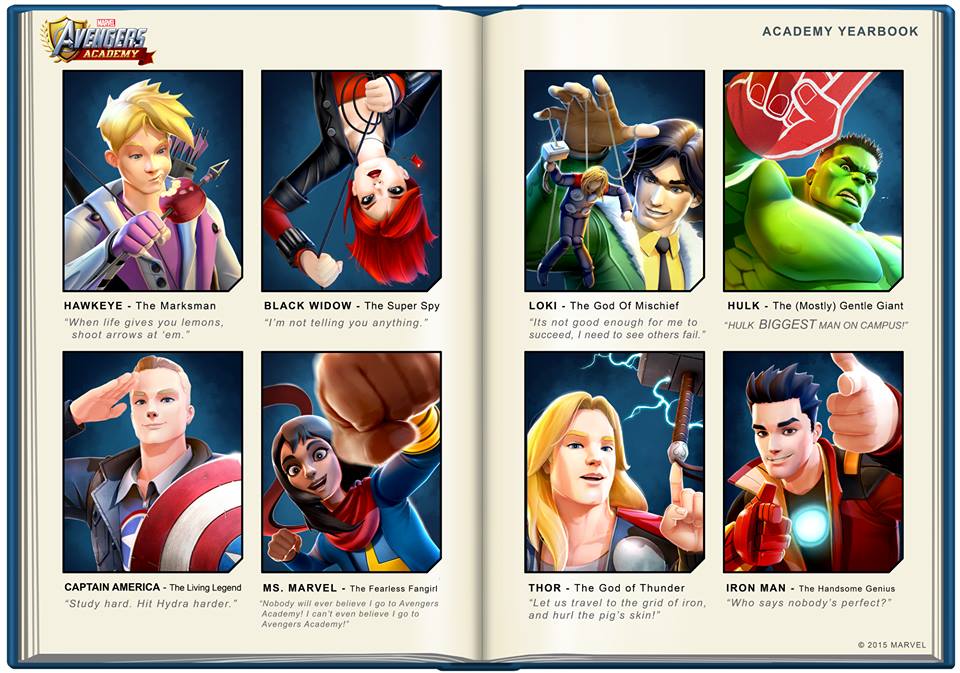 The way to describe this game is Marvel Sims University. Yup, that’s pretty much it. You go around, making sure they do tasks to complete objectives (or just dance for your amusement), and progress through the story. It has no combat mode, so it pretty much has a very relaxed pace narrative-wise (and optional outfits are for aesthetic and to cut down on time for certain actions). On one hand, this irks me – with no real aim other than ‘complete objectives’, it seems a little dull. Additionally, certain characters are trapped behind paywalls – looks like I’ll never get to have my own Vision, War Machine, Spider-Woman, as well as event-only characters like Red Hulk and A-Bomb.

So, what is its saving grace? Well… 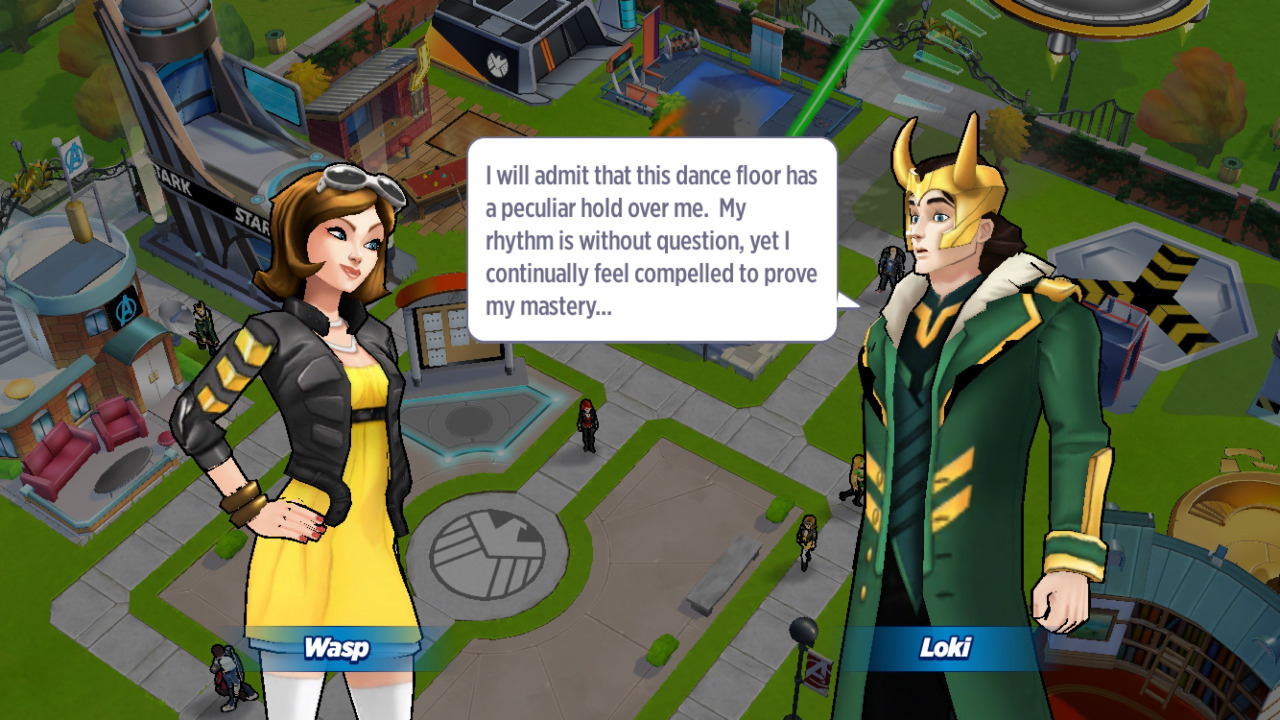 The writing is actually pretty funny.

Okay, I get it, this whole this is an Avengers Highschool Fanfiction AU, dumbed down and made for kids. I mean Red Skull is a jock leading a school of bullies, and it is just ludicrous. However, that’s part of the fun. It embraces it’s absurdity, which charges the writing with a kind of mildly enjoyable comedy. 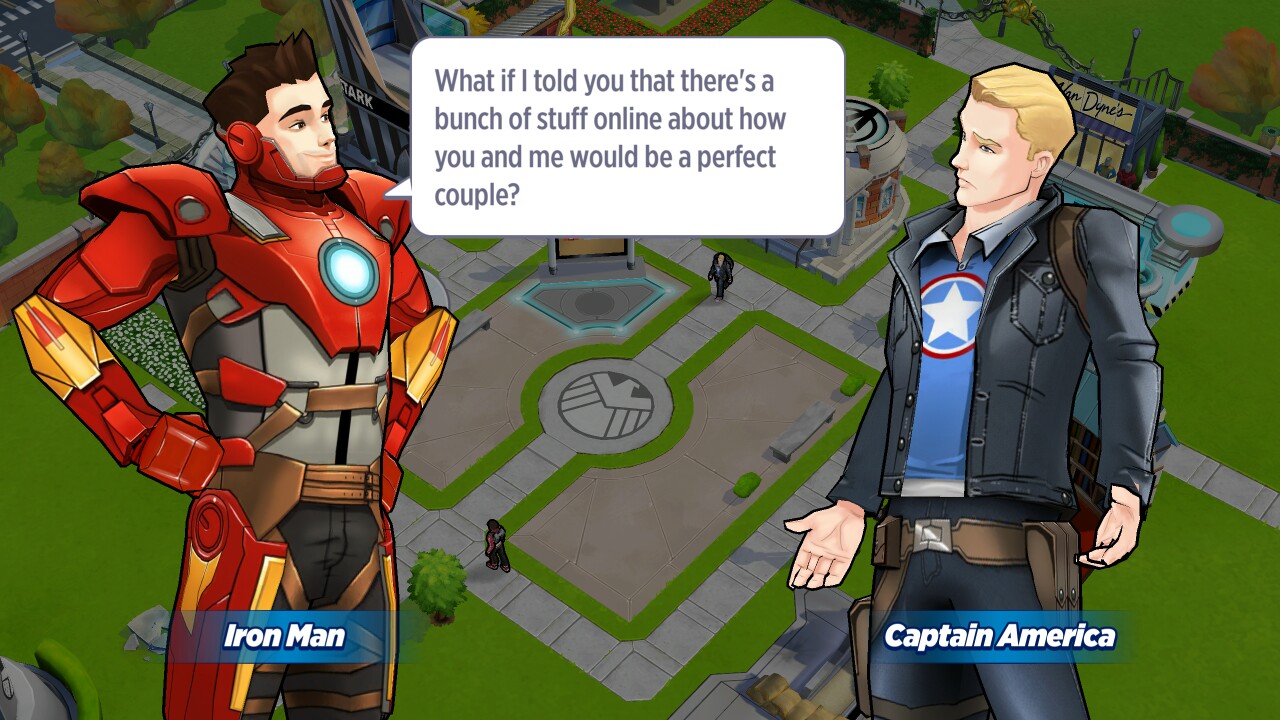 Stay away from the internet Cap!

The voice-cast reflects the demographic that this game is aimed at; we have a mix of professional actors like Alison Brie (Black Widow), and Dave Franco (Iron Man), as well as some online personas such as Youtubers Syndicate (Loki) and Seananners (Taskmaster). They even managed to get John Cena (Hulk)! Whilst some of the dialogue could be better, and the quality of the audio for some characters is kind of jarring, all in all they all seem to work together really well to make these characters seem pretty in character. It’s also nice to see the range of ‘Avengers’ you can recruit – with main stars like Black Widow, Iron Man and Captain America, it also gives some spotlight to Taskmaster, Maria Hill and Ms. Marvel, who receives some very high compliments from many characters, including the villains. The writing is pretty interesting too. Whilst it may seem like a simple alternate reality where the Avengers are students, there is actually an interesting story playing out behind the scenes. When you liberate the first square of timefog, you find a damaged Iron Man helmet…which would be fine, if it weren’t for the fact that technically Iron Man hasn’t built his entire suit at that time. Additionally, in further patches of timefog you can make out characters like Hulk and Thor trapped in there, with no explanation. Black Widow is the only one who is doesn’t completely trust the situation, and sets out to find out what the adults are hiding from them.

And remember what I said earlier about ‘for kids’? 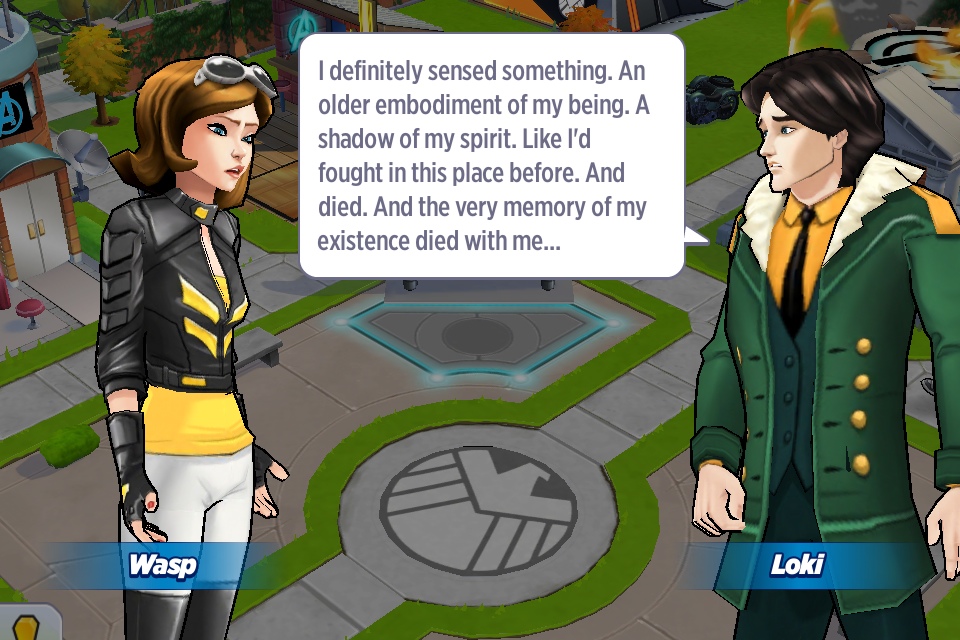 It does look like they will not update the story, but will be adding optional events which will give you the slim opportunity (unless you pay) to get even more characters…like Hawkeye (who was prominent in the promos, but oddly missing from the release) and even Bucky. 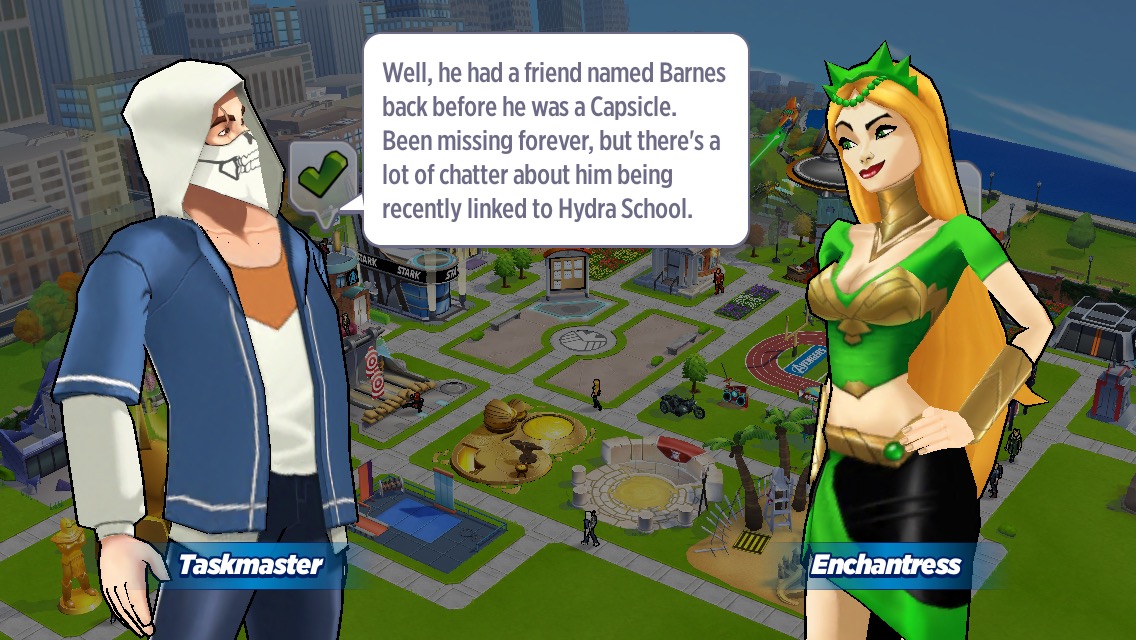 This kind of implies that it will be added to the story, but it wouldn’t surprise me if it was pay-only.

Which actually brings me to my biggest gripe of the game – the paywall. It seems a pain that a lot of the content that is here (and will be added later) is locked behind a paywall. I get it as a business strategy, but the fact that I can’t even work my way with patience to getting these characters is actually quite irritating. No amount of remodelling my academy can quell my dissatisfaction!

All in all, the game is pretty fun. You can dip in and out without it affecting your progress (except for time-sensitive events), and it looks like they’ll be releasing more characters and features in the near future.