Easy To Get Overwhelmed By Side Missions

This is the way Lord Of The Rings was meant to be played. Shadow Of Mordor distills all the best parts of Assassin's Creed, Dishonoured and the Arkham games into a heady mix of brutal combat, innovative gameplay and stunning looks, all under the veneer of a much loved series. Shadow Of Mordor, rather than casting aside its influences, positively revels in the comparisons in a way that is glorious to behold.

Imagine a party. Dishonoured and Assassins’s Creed came together and, during the course of a night of fun, they decide to try something new and a little naughty with the Arkham games. When they all woke up the next morning in the house of J.R.R Tolkien they found that they had created the glorious being that is Middle-Earth: Shadow Of Mordor. My word, it is a thing of beauty. 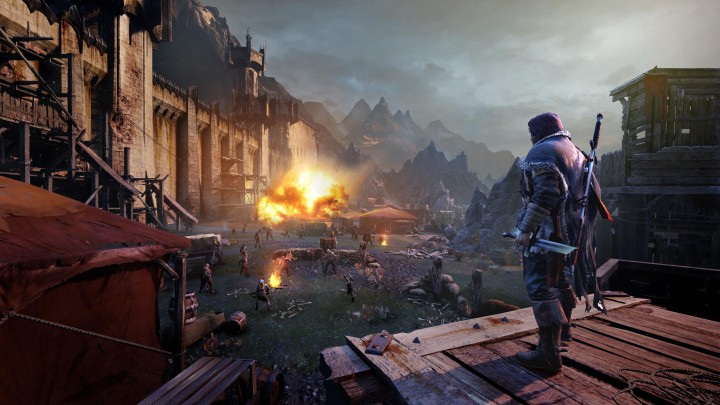 Just take a moment to look at that. This is a game that can only be described as gorgeous. The visuals are sumptuous throughout and that screenshot there isn’t even from the prettiest section of the game. Upon arriving in Nurn, my eyes pretty much gave up on ever seeing anything better. You move through a world that, despite the inherent ugliness of the hellish land that is Mordor, comes off as a true work of art. Every part of SoM is beautiful in its aesthetic, from the landscape to the characters.

And those characters are truly epic. Let’s start with your main guy, Talion. I’m going to keep the identity of your wraith partner a secret I’m afraid as it’s not only a pleasant surprise but an interesting section of the story when you get to work through the discovery. Talion, though is fully fleshed out and just awesome. First of all, he’s voiced by Troy Baker so, you know, top notch stuff straight off the bat. Baker is one of my favourite voice actors out there and he does sterling work as Talion. He’s not the only high profile voice to appear as Nolan North also plays certain roles but it as the game’s central character that Troy Baker, to no surprise, really stands out.

It’s an understated character in certain respects, without the overwhelming emotions of previous roles such as The Last Of Us’s Joel and the intensity of Arkham: Origin’s Joker. That’s not to say that Talion is wooden or lacking in emotion, have no fear that he goes through plenty of personal hell himself, it’s just that he’s incredibly stoic and the game tends to focus on revealing the character through action than heavy exposition. There are plenty of cinematics where we get to see Talion explored but it is in the sheer fury you get to reign down on the armies of Sauron and the playstyle you bring to the game that you really get to shape the character.

In this freedom is an interesting aspect of the game as well in that it’s a sort of semi-RPG. Though not a true role-playing game, SoM is definitely more suited to the action-adventure genre, it employs certain RPG elements in the creation of the world and its systems. The open world, containing several areas which you will traverse as you progress through the story, is heavily populated with side quests, collectibles and challenges. It’s actually almost a problem how much time you can spend hunting down Uruk captains to prevent them gaining power. 5 hours into my playthrough I’d hardly touched the campaign. This is a tricky point in so much as you are not compelled to take part in this side aspect of the game in terms of it isn’t entirely necessary but if you have any OCD at all, those symbols on the map are going to annoy the hell out of you. That said, the missions are always fun to do and represent a good variety, across both the main and side quests. And the Nemesis system adds a whole new dimension to your conflict with the mini-bosses that are the Uruk captains. 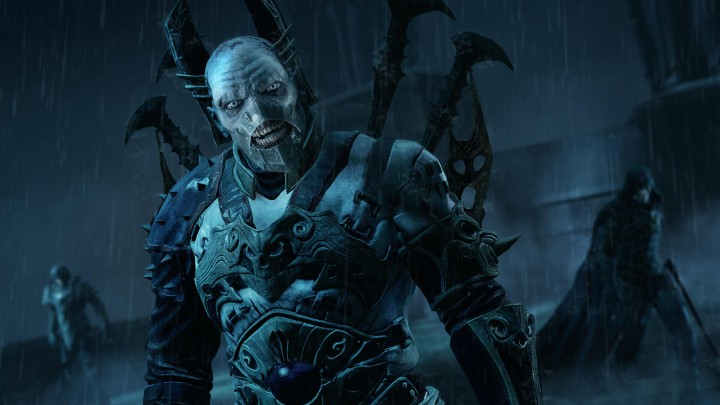 Those are the real big bads  there, the Black Captains. But they’re not the ones who are going to cause you endless pain throughout your playthrough. It’s the Uruk captains, specifically the Uruk captains that will persistently return, more pissed off than ever thanks to the Nemesis system. Essentially what this system does is expand your interaction with the captains so if you ever have to fight them more than once they’ll remember you. Most of the time you’ll maybe do a captain twice at most. Not so with Luga. Luga the Warmonger is the bane of my Shadow Of Mordor playthrough.

I have fought this guy six or seven times now. Every time I kill him, he comes back angrier and more messed up. Thanks to the Wraith ability that allows you to interrogate captains, he is now burned to the extent that he’s wearing a Scarecrow-like sack mask. And the bastard can only be hurt by fire. Each captain has various weaknesses and strengths and invulnerabilities. These combat quirks allow you to plan out your fight with them. Luga is invulnerable to Stealth, Ranged and Combat finishers. Literally the only thing I can do is lure him to a fire, explode it onto him and then, when he flees due to his Fear Of Burning, interrogate kill him.As impressive and interesting as the Nemesis system is with the way it evolves your enemies and makes you adapt to fight them, the fact that I have to keep dealing with Luga over and over again is just frustrating. And damn he is ugly.

That aside though, I generally love going up against the captains. Especially as I’m pretty sure one of them made a Rocky Horror Picture Show at one point. An Uruk saying how he’s “tingling with antici…pation” is a joyous thing to behold. And then I killed him. It was brutal and I loved it. You see, Shadow Of Mordor is completely unashamed of its influences and the comparisons being drawn to them. So yes, the freeflow combat does resemble Batman and the stealth kills are reminiscent of Assassin’s Creed. And that blue glow, magic killer thing that has the name Dishonoured on the tip of your tongue? All of those are borne proudly aloft as parts of what make a superb whole. When I’m dancing my way through a Mordor camp, leaving a trail of the dead in my wake, I’m not bitching about how they just copied the style from Batman, I’m yelling about how I just cut that one dude’s head off then used my wraith powers to teleport to another where I then blocked his attack as my wraith blocked one from behind. I USED SOMETHING CALLED A CARAGOR TO DISEMBOWEL A GUY. This game is awesome. 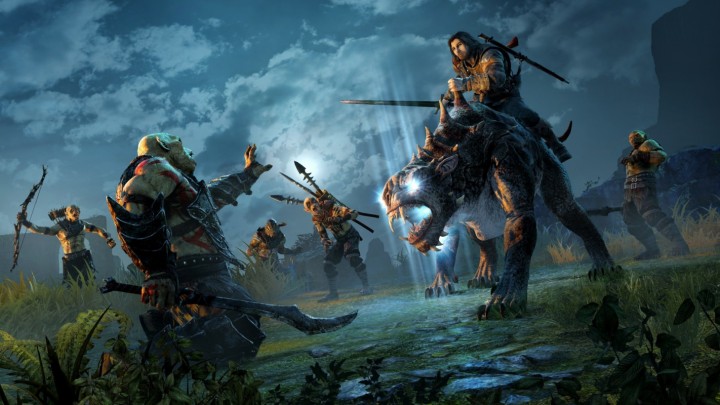 But here’s the important thing about the combat. The stylistic of it can send you gracefully leaping between Uruks as you sever heads and limbs left and right but it’s never a sure bet. Using the side quests to level your skills can make certain fights almost laughably easy but combat manages to retain a certain level of challenge throughout, the moment when you find yourself surrounded by fifty Uruks and facing off against three captains, all with different invulnerabilities, certainly makes for some interesting gameplay. And those wraith powers I mentioned before? Yeah they may be a somewhat limited resource but their is a gleeful balancing of the scales when you start slow-mo headshotting people with your wraith bow. Teleporting, wraith punching, beast control, all these abilities and more are yours to use and abuse as the mood takes you.

Behind all of this aesthetic awesomeness is also a pretty solid and dark story if you go in for that kind of thing. You get all the classics of heroism and revenge and so on in a way that is relatable and engaging to go along with, while avoiding the pitfall of turning the entire game into a multiple hour therapy session for Talion. It delivers on intrigue and emotion and good drama but also keeps it toned down enough to let you really get stuck into killing every last Orc in Mordor. 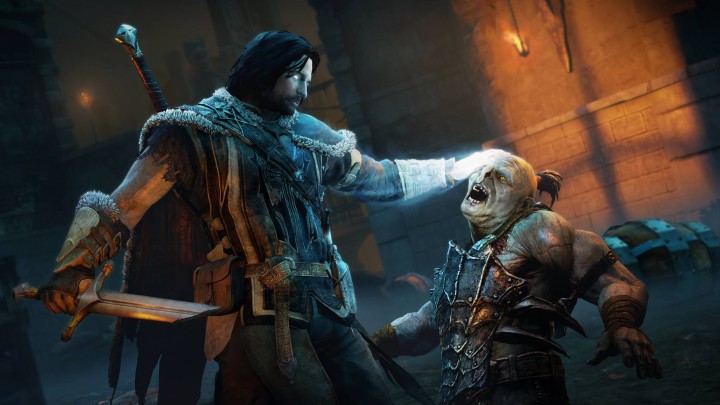 I should at this point, probably mention that the game isn’t perfect. Shocking I know. I touched on it before but here I will fully explain. It is very very easy to get distracted from the main campaign. This occurs in the form of Nemesis events. Each captain has a power rating which they can increase through completing these events. What this means is that they’ll be harder for you to beat later on. The problem with this is that these events are popping up pretty much constantly and even when you wipe out the captains almost completely, they’re ranks and fairly quickly replenished. While it doesn’t ruin the game by any means, it does cause somewhat of a loss of focus and an extent of game fatigue.

And now I have dealt with the single issue represented by this game. So let me just reiterate that this is the way Lord Of The Rings was meant to be played. I haven’t even finished the game yet. I’m 11 hours in and just transitioned to Nurn, the second area. It took me 11 hours to drag myself away from Udun. There have been plenty of good games bearing the LOTR banner. But with Shadow Of Mordor, developers Behaviour Interactive and Monolith Productions have birthed unto the world a game truly deserving of the legacy that accompanies it. I urge you, step into the shoes of the Dark Ranger. It is not a journey you will soon regret, if for no other reason than to look at how goddamn pretty it is. 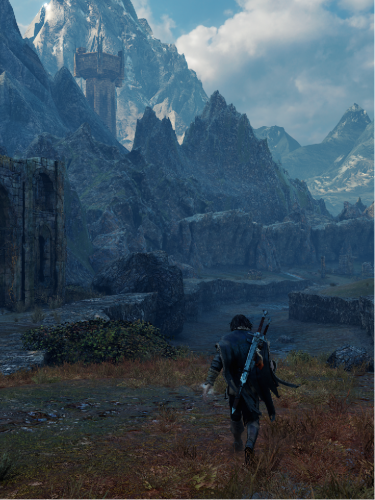 And lo, it was damn fine