Those not desperately itching for a new AA puzzle experience on their PS4 are likely to find better and more wallet-friendly alternatives elsewhere. 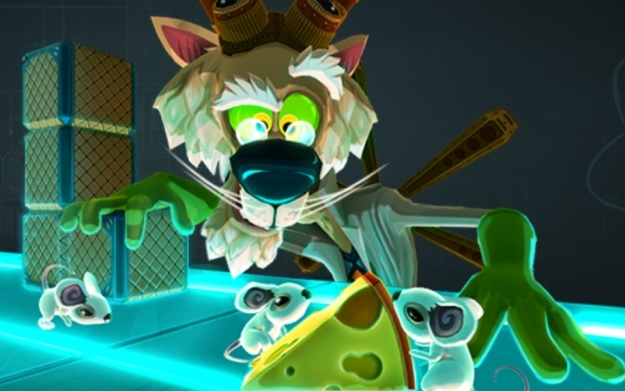 Where does homage stop and plagiarism begin? That was a question I found myself facing quite often when playing through MouseCraft, the latest in a long line of PC to PlayStation ports by indie publishers; Curve Digital.

In a world where truly original games are often few and far between, revolutionary mechanics don’t appear often and we usually expect to see at least some coat-tail riding and elements of inspiration from the classics that came before. What isn’t, and shouldn’t, be expected however is for a game to simply cherry pick aspects from the industry’s past and haphazardly attempt to combine into a new mid-tier title. Unfortunately this is what MouseCraft does and it doesn’t even manage to do that particularly well.

Although the story is largely irrelevant, MouseCraft follows the feline Professor Schrödinger on his quest to conduct experiments involving mice and a series of increasingly complex puzzles. In classic Lemmings style, the mice need to get from point A to B and it’s Schrödinger’s job to make sure that happens using a variety of different tools, whilst also avoiding the various obstacles and dangers that get in the way.

On the surface, MouseCraft is a pleasant little puzzler and the traditional side-scrolling interface will feel familiar to anybody who has played an iPhone game in the last 5 years. The menu screen looks like it was lifted straight out of Angry Birds and to start with the controls are as simple as you might expect. Combine Tetris-style blocks to create steps and Braid-esque time manipulation to slow things down or undo your mistakes. Achieve all of the required goals on each level and receive a full star rating or skip things for an easier way out and risk a shameful 1 or 2-star blot on your profile. There’s also a simple level editor tool that allows players to create their own sadistic content and share it with their friends online. 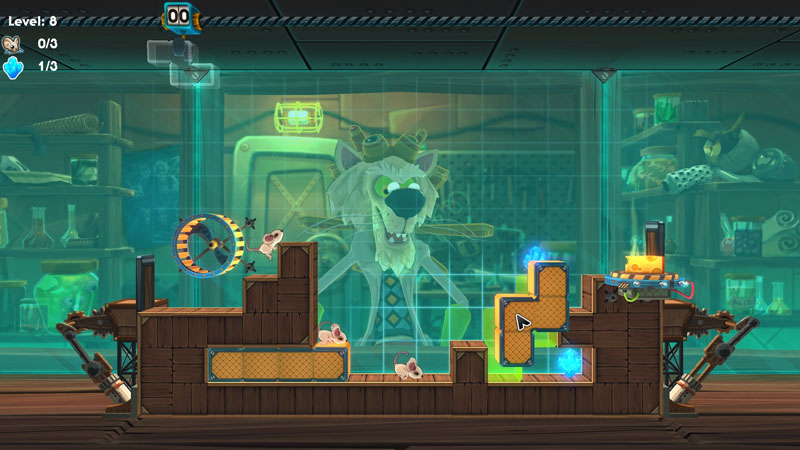 The main problems with MouseCraft are two-fold. The first is that the game’s developers have obviously focused so hard on mimicking the competition and throwing so many different inspirational mechanics into the mix that they have forgotten to create anything truly unique of their own. MouseCraft starts to feel old very quickly and there isn’t much here to set it apart from the many rivals that can keep players coming back for more.

Secondly, all of the mechanical tropes that MouseCraft tries so hard to reproduce have been used better before. After around 12 levels of constantly having new techniques and controls thrown at you, the control system soon becomes massively overcomplicated. It doesn’t help that every tool and technique also has its own little rules such as ‘your mice will die if they fall from a height taller than 3 blocks without a soft gel block at the bottom to land on’ and ‘bombs can destroy the blocks and enemies but not your own mice’. For a puzzle game to be successful these days it needs to either be extremely simple and addictive or mind-bendingly original. Sadly, MouseCraft fails at being any of these things.

The PS4 isn’t exactly overflowing with puzzle titles at the moment. If you’re a PS4 owner and puzzle fanatic who prefers the big screen experience over an iPad then MouseCraft could be a decent choice, especially considering that cross-play support for Vita and PS3 adds extra value. For anyone else, MouseCraft is likely going to be a largely forgettable experience. It’s a sad textbook example of what can happen when a designer tries to cram too much in without fully taking stock of the consequences. A wasted opportunity that only seems to want to replicate what a myriad of rivals on Steam, mobile and home consoles already do better and for a much lower price.

MouseCraft is due for release for PS4, PS3 and Vita on 9th July 2014 in Europe via the PlayStation Store. The PC version of MouseCraft is available now on Steam.