We Need To Talk About Gone Home

Right kids—settle down, get your finger out of there before it falls off, and listen to your 7th favorite internet loud mouth for a second.I’ve been playing Le Games Des Video for more years than I can remember. I love them. I can’t gosh darn get enough of them. Hell, I even have a mediocre visual outlet for them.So I’ve run the gauntlet, as it were. I remember VR the first time. I’ve seen a Powerglove in person. I used to hang out at arcades (I still would if going to the beach alone wouldn’t put me on the sex offender’s register). Video games, for me, are my bread-and-butter.

So I should’ve known not to listen when every Dude McBro spouted off online about Gone Home. I should’ve just played the damn game for myself and written this 2 years ago, when perhaps it would’ve been a tad more relevant than it is now. But here we are—I did listen, I’ve only just played it, and now I’m doing a heckin’ big write about it. Spoilers, obviously. Oh, and I’m chubby white dude that’s going to mention feminism, too.

Gone Home is a game in which your character, one Katie, comes home from traveling to find an empty house and a note from her sister, Sam, which sounds awfully ominous. After the game cleverly introduces its one mechanic (search for stuff and use the stuff)  you gain access to the house and start uncovering what the bloody hell Sam is on about when she says you’ll  “See each other again some day”. Through the subsequent 1-2 hours you’ll typically take to run a playthrough you will unearth a compelling narrative with a bevy of subplots that only serve to enrichen the main story while exploring a lavish and creepy mansion once owned by an insane person. 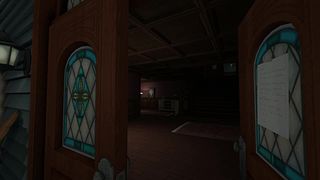 We can, thanks to Laura K Buzz, drop the tar-brushing statement of “walking simulator” when discussing Gone Home and its ilk. The term “Interactive Drama” is a damn sight more on point and descriptive of the gameplay elements. “Walking Simulator” is a term you give to something boring or one-dimensional, like Dear Esther (yeah, I said it, fight me), GH is far, far more than that. It’s a story of discovery, that you achieve via the act of discovery. And boy, what a story. It’s a tale of secret love, coming out, and blood not being thicker than water. It’s the lucid dream of everyone who’s ever been in the closet, or had their relationship in the cover of darkness, that ends with you discovering where Sam has gone: to go be with her girlfriend. To start her new life together. Away from the bigotry of “it’s just a phase”, and the pain of waiting for the “quiet moments” to express their love. This is a story that is sweet but not in an overly saccharine way, with you ultimately rallying behind Sam for her decisions by the end.It’s a game that wants you to believe that love can, in fact, conquer all.

This narrative content seems to be the thing that had the louder-shouting parts of the internet annoyed. Shouts of “SJW game” and “agenda” were thrown about and I, as an impressionable idiot with a very wrong understanding of what SJW actually meant, avoided the game. I know plenty of other people who hold a similar opinion and wrote this game off as “tumblr”. But, friends, strangers; this game is not “tumblr”. This game is good. Fucking good, in fact.It’s a tale of feminism and homosexuality, of societal pressure and secret love, unfolding as you see fit via the choices you make.

It would be remiss not to mention the soundtrack that includes almost exclusively awesome feminist Riot Grrl bands that have now been firmly added to my collection of “songs I want to listen to when I’m feeling sassy”. You experience the soundtrack via various mix tapes and I cannot express enough how quintessentially 90s the bands on there are. It’s perfect, it’s punk, and you should put it in your ears immediately. The songs themselves are the aural exploration of Lonnie (Sam’s girlfriend) and her impact in Sam’s life, mirroring the impact of the Riot Grrl movement in the 90s themselves. 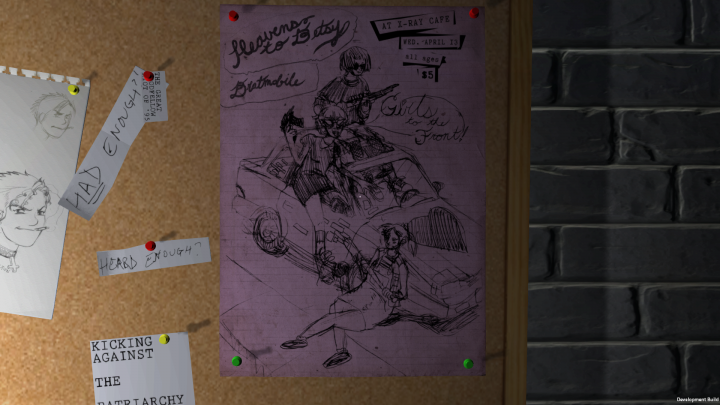 I wish this “zine was real. Sigh.

The side plot of a potential haunting is prevalent throughout.The game has an aura about it: as you explore the empty mansion you feel a slightly unnerving sense of dread around every corner, waiting for a huge scare. You actually discover a Ouija board and a Summoning Ritual before reaching your final destination of the attic, while Sam’s diary constantly mentions her “ghost watching” and possible sightings. These are all delicious red-herrings: my personal favourite being the hair dye/ blood debacle that ends in a diary entry that will make you well up, or miss someone you love.

The open narrative structure allows you to explore the house at your own pace and exactly how you want to. You can go into as much or as little detail about the other family members and history of the house as you want, meaning the replayability is a lot higher than that of other games of this kind.

All of the above, and so much more, is what makes GH so monumentally important as a game. It sends a message that love is, well… Love. Yes, what Sam and Lonnie do is reckless, but it should serve as a warning to those parents that dismiss their children when they tentatively or otherwise bring up the subject of their sexuality. To every father that’s said “you ain’t livin’ ‘ere no more if you’re one o’ them gays” or every mother who’s said “it’s just a phase, you’re young, you’ll get over it” GH is a red light flashing. And it’s a beacon of hope to those that are in those situations. You can always leave. You can always leave. GH looks you in the eyes and tells you that blood’s only thicker than water when it’s not actively trying to suppress who you really are. And all of this is conducted in a game with no aliens, explosions, fighting, men with beards, dragons, or any of that other images conjured when someone says “videogames”.

The way you see Sam falling in love perfectly nails the way it really feels.The rush, the confusion, the awe of it all.For those of you that don’t know, I’m a musician (well, a drummer) and a man who has been in secret relationships. I have experienced all too well the agonizing wait for the moments when you’re finally alone and can act like yourselves. Those small, stolen seconds where you quickly check to see if anyone is looking, and you steal a kiss from each other. Maybe this is why GH resonated with me so much. Maybe it’s why hearing that Lonnie couldn’t face being apart from Sam, and her subsequent “pack-everything-and-run-away-together” strategy literally broke me to tears. Or maybe it’s just a fucking good example of “Interactive Drama” that should be experienced by everyone. A sterling example, perhaps, to not listen to the “outraged” neckbeards that hate anything attempting to make videogames the art form we all should believe it is by now. This game is earnest in its story and gives you a no-frills account of teen angst, punk, and love. And if that doesn’t sell it to you, I’m fresh out of ideas.

You can find Mike spouting off on twitter @The_Dark_Mike , or being a Riot Grrl in Grunge band Dogtown

Hailing from Kent, England, Mike is a writer, editor and podcaster who has just finished his degree at CCCU. He also is a drummer of 11+years, plays in several bands, and is available for session work. His other interests are Batman, music which doesn't suck and pizza. Follow Mike @The_Dark_Mike
More Goodness
GP blog