Straight to the point: A very enjoyable, beautiful RPG, which is not without its flaws but thankfully you’ll be so immersed in the whole world of Ni No Kuni, that you won’t notice them too often. This is definitely one to get if you are either a fan of JRPGs or Studio Ghibli films.

Ni No Kuni, which literally translates as Second Country, is a collaboration between Level 5, developer of  the Professor Layton and Dragon Quest series and animators Studio Ghibli, the team behind animated classics such as Spirited Away and My Neighbour Totoro; resulting in a great JRPG with amazing animation and a strong storyline.

The story follows a boy named Oliver, who is in mourning after the death of his mother and whose tears bring the doll his mother gave him, to life. Mr Drippy, the aforementioned doll reveals himself as the High Lord of the Fairies and is from a magical world, parallel to ours, which is greatly troubled; he asks Oliver to help him save it. At First he is reluctant but Mr. Drippy informs him that in his world there is a great sage whose soul is linked to his mother and if they can find and save her, then there’s a chance to save his mother.

I struggle to think of an RPG, especially in recent years, with a better story than this; maybe because the main protagonist isn’t just some cocky young warrior but a young boy, who is trying to come to terms with the death of his mother and deals with it by fixing everyone else’s lives. As everyone in the magical world has a a soul twinned with that of someone in Oliver’s world, it involves him going back and forth between the worlds to right the wrongs of one character to fix their parallel version’s problems.  Most of the characters display a fair amount of depth and they are not always what they first seem to be; even the villians have some backstory, which explains what has caused them to want to destroy the world they live in. Emotions are a key subject throughout they game and you’ll find yourself experiencing a few yourself as it really pulls at your heart-strings.

The best thing though is that, thanks to Mr. Drippy, you’ll be laughing most of the time as he’s absolutely hilarious and I think it’s a nice touch that he was given a welsh accent,  complete with colloquialisms; the subtitles are even written that way. I thought that maybe Studio Ghibli really liked the way the welsh spoke but more than likely their real motive was a bit more comic relief; as given away when Oliver talks about Drippy’s accent, saying “It sounds really goofy.”

The animation and music score are pretty amazing; you really fell as though you’re controlling a Studio Ghibli film. The characters, monsters and the towns show a lot of imagination and you can really get lost in this world for the visuals alone.

You’d be forgiven for thinking that Ni No Kuni’s game-play bears a striking resemblance to the Final Fantasy games of the nineties and there are quite a few similarities: you need to travel from town to town, across a large map where you can bump in to enemies at any time (except you can see them coming in this) and are then transported into battle mode, which also at first glance looks quite similar;  the towns are where the quests / supplies are picked up and it features many dungeon type levels. However, it also has a Pokemon element to it, in the form of familiars. 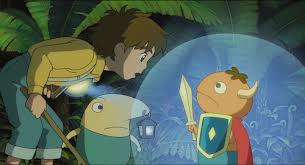 Familiars are creatures which fight for you in the battle mode. They are said to come from your heart but then it turns out that when you battle monsters, they can sometimes be captured and join you. Each member of your party can carry 3 at a time, which can be switched between at an point during battles.  If, like me, you collect too many familiars, you can put them in storage, which holds up to 400 of the little blighters; not that you need to as you will never use that many. They level up after each battle if they are in you party, even if you haven’t used them in that particular battle and they can learn new spells and abilities along the way.  Feeding them treats adds points to their attributes and when they reach a certain level, they can metamorphosize into a stronger creature. They can do this twice and then you have a choice between 2 different transformations. It’s a good idea to experiment using different familiars to find out which ones suit your play-style best and sometimes it’s a best to use ones with elemental magic, which counter the element of your enemies.

In battle mode, you can have up to 3 characters fighting for you, each able to either control one familiar at a time or fight for themselves and, unlike Final Fantasy, you can freely move around the battle area, controlling 1 character at a time and setting their tactics: heal, provide back-up, do nothing or act freely. Sadly you can’t control what enemy they focus on, which can cause problems, as many battles can be a complete mess with familiars bumping into each other as they pursue a particular enemy, who also move around the area quite erratically; this can be incredibly annoying. However, you can press a button to command the AI controlled characters to either all attack or all defend, but this feature doesn’t unlock until about 12 hours in to the game.

Each character has a set of commands: attack, defend, spells, provisions and run away and some commands have sub-menus, which pause the action  while you decide which spell or provision you want to use. Unfortunately there is no pause while you are on the main set and it can be a bit tricky to navigate to the command you want in time to activate it; this seems to be intentional as the timing of attacking or defending is very important. Successfully defending an attack can cause the enemy to drop orbs, which replenish your health or mana; they also occasionally drop a golden orb, which can trigger a character or familiar’s special ability. 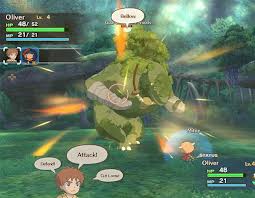 Learning all of the tactics of battle can take a little bit of time to master but once you have, they get easier; unless you are fighting enemies whose level is much higher than yours. It’s not until some of the later boss fights, that it gets pretty challenging; those bosses have some unfairly devastating attacks!

In the towns, there are many people to help out and so there is an abundance of side quests to complete as well as monster bounty hunts. Completing these rewards you with merit stamps, which can be traded in for new abilities. These really fill out the game but they are often quite simple and can be very repetitive, often involving a lot of back tracking across the world map and at times I got quite bored of doing them; I must admit, I put the game down for a couple of weeks because of this but I’m glad I picked it back up again as it gets much better towards the end.

Although it can get quite dull at times, particularly halfway though; it’s great fun overall and although I’ve heard that some people have finished it in 20 hours, I managed to get over 50, probably because I completed almost all of the side-quests and fought more battles than I needed in order to build up my characters / familiars and generate enough cash for plenty of provisions and equipment. In fact, I thought it was all done and dusted at one point and I was satisfied with the size of the game, only to be hit with another 7 hours of playing time after that; every time I thought I had beaten the final boss, they either morphed into something greater or there was yet another boss; now that’s value for money. All in all, even though it may not be perfect, it has more depth than most RPGs released in the last decade and is bursting with charm; any fan of this genre would do well to add this game to their collection.