previous
TitanFall: Beta is now open for PC and Xbox One
random
next
Ryse to go on sale tomorrow as part of Xbox One digital price ‘testing’
Video Games & Tech
0 likes

...Which doesn't work if a memory card is inserted, and it doesn't quite carry the same premium feel that the original did.

The Playstation Vita has had a rough life so far. Boasting an impressive ( and beautiful) catalogue of games, the public has never latched on to it the same way they did with, say, the Nintendo 3DS. Having an elegant, well constructed design, backed by some killer specifications the Vita should have (in theory) been a hit within the “hardcore” gaming community, especially with AAA titles like ‘Uncharted: Golden Abyss’ and ‘Killzone Mercenary’ already out, and other titles such as ‘Final Fantasy X/X-2 HD Remaster’ and ‘Borderlands 2’ on the way in the not-so-distant future. Its main selling point was, initially, as I have just mentioned; Home Console experiences on a handheld. This all quickly changed with Sony’s new found love of Indie titles, with PC hits ‘Terraria’ and ‘Spelunky’ finding a new home to everyone’s delight. Regardless, the Vita has still been struggling in all markets since its initial inception, and whilst the release of the Playstation 4 gave it a new lease of life due to Remote Play, Sony needed to do something quickly to help consumers purchase the failing console.

Enter the Playstation Vita Slim. Having been released in Japan at the end of 2013, Europe managed to get their hands on the redesigned console on February 7th at a RRP of £180. Whilst this is still more expensive than you could find the original for in shops, it still gives an official saving of £50. 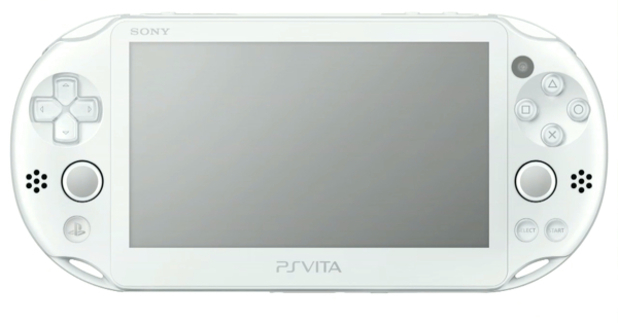 The White variant, exclusive to Japan for the meantime

So what’s different? Well, the first, and most likely biggest, change is the OLED screen. Or the fact that it isn’t an OLED screen now, but instead an LCD screen which, for the display buffs out there, will immediately recognise it as a downgrade. However with advances in LCD screen technology as of late the only main difference we see between the two screens are the vibrant (arguably often over-saturated) colours. Games still look gorgeous, and the chances of you noticing the difference are very slim ( pun not intended). Place it next to the original screen to compare, however, and the difference will be night and day. The premium build has somewhat disappeared as well. Whilst the console itself feels just as sturdy as before, it doesn’t give you the same expensive feeling that the original gave. Don’t take from this that it’s an ugly handheld though, it’s just not as beautiful as its older, fatter brother.

The sacrifice of the more premium materials used has indeed slimmed the console down, both in thickness and in weight. Having trimmed 20% of the thickness, as well as also being 15% lighter, this is certainly a worthy trade off, helping make the new Vita feel just that bit more refined. Whilst being 15% lighter may not sound a lot, you really do feel it, especially in the longer gaming sessions. The layout of the button configuration has remained, for the vast majority, the same, albeit with new shoulder buttons and a redesigned round Playstation, Start and Select button (as opposed to the previous oblong shaped ones). The back of the console has also seen some improvement, with the grip size having been increased at the cost of a smaller rear touch panel. This, in turn, makes it more comfortable to hold, whilst reducing accidental rear touchpad inputs.

One of the biggest positives of the new console is the improved battery life. In changing screen technology from OLED to LCD, the battery life has been extended significantly. Whilst Sony’s official statistics say you may get between 1 extra hour to 2, in my own play testing I have found that to be closed to the 3 hour mark, and this only further improves if you’re playing less intensive games, such as old PS1 and PSP games. The console itself now features 1gb of internal memory which, whilst is a good thing, has been implemented poorly. While internal memory is lovely, the console doesn’t see that memory when you’ve placed a memory card in the port, meaning that any apps and/or games that you previously had installed won’t show up. I only planned to make use of the internal memory with social apps anyway, but that’s beside the point. You will still need one of Sony’s own memory cards for the Vita’s bigger games, such as the aforementioned ‘Killzone Mercenary’, and that’s one of the drawbacks of the Vita ecosystem as a whole; they’re just too expensive. A simple 4gb card costs just shy of £11 at the time of writing, and that wouldn’t fit Killzone and its large patch data on to it. 16gb hits the £24-£30 region, but unless you want to keep switching apps, you will need multiple memory cards. However, this isn’t a new problem, just a recurring one that we can only hope Sony is trying to fix.

The lasting impression and feeling given by this redesigned portable console is a generally positive one. It’s still the same amazing handheld, just at a more affordable, pocketable format. And that’s what really matters in the end.

Do you agree or disagree? Let us know in the comments below.