Reviewed on PC. Also Available on Nintendo Switch, Xbox One and PS4

Lots of replayability
Lots of different settings and challenges
Very challenging if you want it to be
Absorbing and addictive when it gets its claws into you
Looks great on big monitors at hi res
Sneaky historical and economic education
HUGE train sets!

Complexity can become overwhelming
You can sometimes get stuc on the same challenge repeatedly while you understand the relationships between what you have to do to achive 2, 3 or more at once.
Route finding for tracks can be... Unreliable, so you need to micromanage
The opposing AI players and their verbal jabs can be VERY effective at annoying you.

It's an addictive game if you're the right kind of person to become obsessed with complex systems and train sets you never have to put away.
Make sure you have a comfortable computer chair.

What is Railway Empire?

Let’s be honest here – This is not an FPS, it’s not an MMO, it’s not really an RPG. this is a train set with a management sim attached, and it’s designed to eat your life whole. Once you’re hooked on this, you’ll mislay evenings, if not weekends. and you’ll come back for more. and when you crash and burn? You’ll just pick another scenario and go again. They’re going to claw the keyboard and mouse from your hands with a crowbar if Railway Empire grabs you in the first 30 minutes to an hour that you play it (Which will become 3 or 4 hours at least). 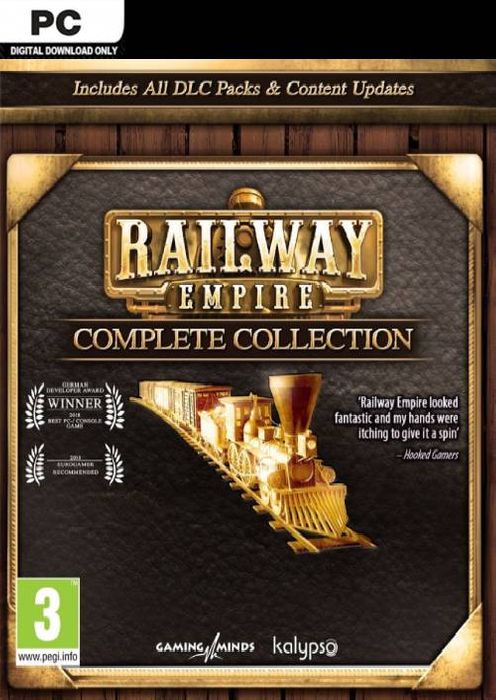 Why should I buy Railway Empire – The Complete Collection?

While the original game is a couple of years old, the graphics don’t need an update – They are still pretty good and colourful. The main reason to go for this version is that it includes all the add-ons to make it even more of a time sink. Once you have the hang of the original options, you can just pick new countries and new challenges. You didn’t need to sleep, right? That’s one game, 13 free updates and 8 DLCs. 83 authentic locomotives in countries from the UK, France, Germany, Sweden and the US (Including the Great Lakes) to Mexico and even Australia. There are 15 unique scenarios, 4 challenge maps, and Free and Sandbox modes for when you just want to build the biggest train set ever, and not worry about the kids or the cat destroying it.

What is the game about?

So, you might ask before you start (If you waited that long!), “What do you actually do?” 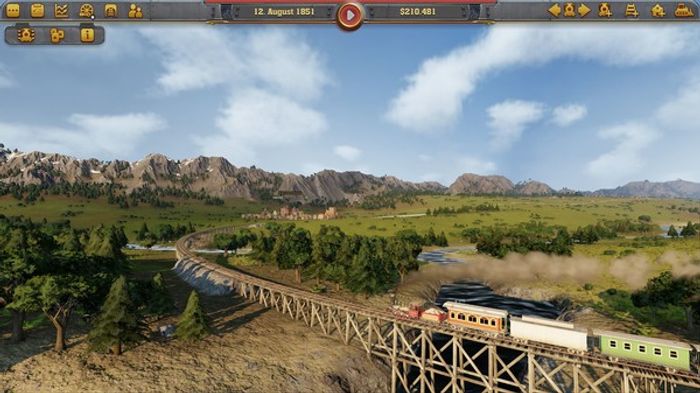 Well, the scenarios start at various times from the start of the industrial revolution, as the train, or steam locomotive becomes a viable method of transport. Depending on the country and challenge you choose, you start in a location, with some money. You pick one of a number of possible kings or queens of industry to ‘be’, each with their own quirks – some good, some bad. The scenarios throw you not just timed challenges (‘Deliver x loads of meat to town a by 1897’, ‘Create x loads of tweed by September 1902’, for example), but also pit you against one or more (up to 3) of the industrial behemoths you chose NOT to be. Time can be run at several speeds depending on how much attention you need to pay, and you’ll start off by building stations (and tracks), buying locomotives and setting routes. Depending on the difficulty level, the computer will take care of signalling and such, so you can choose to just build tracks and cross things over left, right and centre without any major crashes occurring.

As things move forwards, you have to worry about maintenance, hiring staff to man your trains, research and develop new technologies and promote your services. You’ll also have to worry about (and perform) espionage and create negative publicity to sabotage your enemies. More than this though – You can buy into the industries you’re supplying. A farm you serve may ask you to invest if they fall on hard times, or even sell up – The same for meat processing plants, cider breweries and others. Auctions occur for items to advance your R&D faster, and you can even build universities and tourist attractions in the towns and cities you’re serving. these can improve your reputation and passenger numbers.

All of this occurs over an area that slowly grows as you succeed. Initially, you may be limited to a relatively small area with only a couple of small and large towns, but that will grow, as the demands which are placed on you grow. You will need to learn and figure out what does and doesn’t work, whether by reading and Googling, trial and error, or maybe even doing the tutorials (I know, crazy, right?). But I’ll warn you now, the biggest hindrance will be your opponents, who love the sound of their own voices. They pop up to criticise you, nag you, or otherwise annoy and taunt you. they are very good at it. So you might want to prepare a hotkey for ‘mute’ when you hear familiar tones. 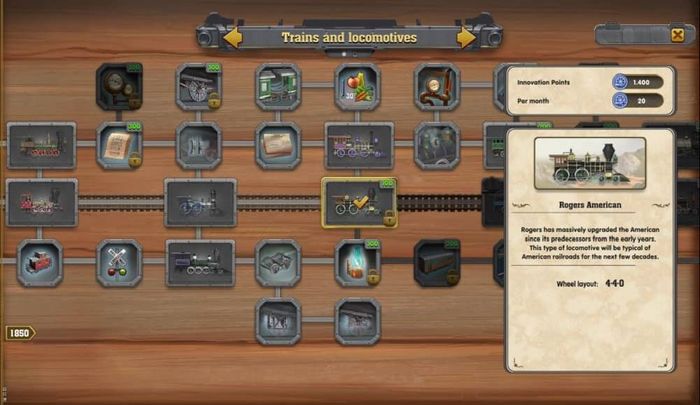 But as this growth occurs, you’ll get little papers popping up to tell you historical facts as they’re occurring in the world around you. This can be fascinating and helps you to get absorbed further into the game.

So it’s not just a train simulator, it’s a historical educational tycoon simulator which asks you to build LOTS of train tracks (and demolish them, and rebuild them), but also points out that you can’t just talk about the trains on their own. As the owner of a train company, you enable the industries and farms and people of the area(s) you operate in to grow and thrive. More than that, you actively invest in them, buy them, so that you produce goods and employ people that have to travel on your trains. This makes money that you reinvest as villages become towns, towns become cities, and cities become sprawling metropolises.

You can’t just leave things running one way indefinitely and make money forever, either. Cities and towns have a capacity for the things you make and carry. So they may WANT meat, but after a bit they are full, so you need to find a new market while they consume what you already took there. Later, you can provide smaller volumes regularly when they need a top-up. It’s a sneaky game that wakes you up to just how interconnected the world is, by slowly having you build and invest in it, making decisions and wringing your hands at your failure to keep up. Or you might scream in rage as you’re undermined and screwed over by your opponents, who then pop up to gloat at you. 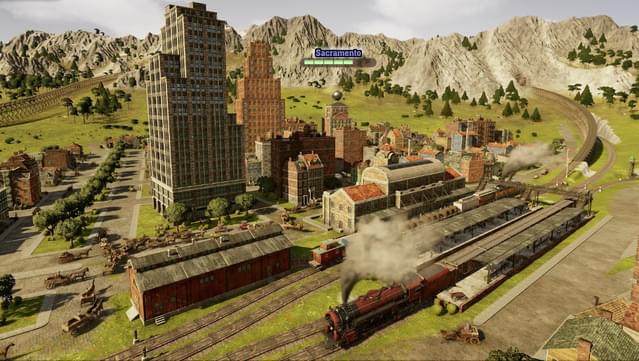 So, is the game fun?

Yes, if you have the gene that makes you susceptible to such things. It’s unlikely to blow away your CoDheads, or FIFA Fanatics, though they might find that they change their mind if they try it. Look at all the FIFA players that have become addicted to Football Manager and Championship Manager over the years, by telling themself it’s still football. It’s pretty good about pushing you just far enough to fail, but not so far you refuse to go back to prove you can still do it.

But, the paths it suggests for tracks can often be…. less than optimal. To make it possible to actually build them, you need to identify the problems (Whether overlapping on terrain or exceeding the money you have on hand) and take care of them by reducing tunnels, cuts and bridges for the line you need to build. This may require a lot of touchups and experimentation in zoomed mode. And to tweak it almost perfectly and come up $100 is to know the anger of the righteous man…..

At that point you switch modes from building to running, turn the speed up, and wait for the other trains to raise the money you need to build the line, before going back into the build menu, finding the old layout waiting for you, and committing to the track – It’s often at this point you find you have no money for an engine to run on that line. One hint – When you’re building stations that have more than one line, pay attention to which line you connect things to, and where the line is going, to avoid awkward crossovers and issues later.

Being the PC version, it supports high resolutions and, more importantly, it supports playing in a window. This means you can happily play with your trains while Facebooking, sitting on Discord or even working (I didn’t say that, honestly!). So yes, it is even EASIER for this game to latch its claws into your soul and drain you. Sometimes things will go wrong repeatedly at the same point, and it will make no sense to you. That’s fine, you can then either keep going at the same problem and experiment until you finally get taken away by the men in white coats, or you can look for help.

There’s a community on Steam that are happy to talk about the game and share tips videos, but as always, be careful what their solution might trade-off against!

In conclusion, Railway Empire is a fun, but a complex game which offers you the ability to build and run an impressive collection of trains and other industries. The main problem with it is that sometimes it’s hard to keep up when you get past a certain point, even when paused. Because there can be so many things happening AND the trains need you to keep an eye on them too.

Maybe it’s just me, but sometimes you bounce back and forth, think it’s all awesome, only to realise you’re not gonna hit the target because you were in the wrong screen for 5 or 6 minutes and missed a maintenance failure. Little things cause big problems, and they’re all happening at once in different places.

Do you load an older save to have another try, or do you start over? Do you try a different map or challenge, and see how that goes?

It’s a tough game at times, so you might need some air occasionally – Walk it off!! But it also feels pretty good when things go right. For the cost it’s a fabulous game – But only if you’re into it. If you want to buy it as a gift, it’s worth checking the recipient’s Steam list, at least, before getting the gamer in your life this game. It might be the wrong choice for them, but there’s plenty of people out there waiting for it, and who might have missed the original! Just look at all the people recommending it on Steam.

I have a feeling I’ll be coming back to this one again and again – I’ll admit I’ve been at best average at it, but… I keep going back for a little more!

I'm just this geek, you know? Love comics, though not a regular reader - Love gaming, PC, board games and wargaming, and reading Sci Fi. Chairman at my local wargaming club, I play X-Wing and occasionally 40k (But mostly X-Wing!) By day I work in eCommerce, by night I'm either still working, reading, watching or writing :)