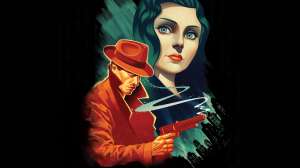 Big Sisters can really mess up your day. In anticipation of the upcoming Bioshock Infinite DLC, Burial At Sea, I’ve recently been replaying Bioshock 2. Burial At Sea builds off the idea of infinite, parallel universes that was presented in Bioshock Infinite and takes it back to the origins of the series. The DLC sees Booker DeWitt, the hero of Infinite, as a detective in pre-devastation Rapture, hired by Elizabeth, looking strangely older and worryingly seductive, to investigate into what quickly becomes a crime noir thriller. Part 1 will see you play as Booker and is due to be released in the upcoming holidays, probably aimed at a Christmas time release , while Part 2 will be released sometime after that and will see you play as Elizabeth.

Both Bioshock 1 and 2 were set in the underwater city of Rapture, intended as a scientific utopia, free from the restrictions of government and religion. This lack of restriction led to the development of Plasmids, chemicals that grant you various superpowers, which, in turn, led to addiction and the city’s ultimate descent into destruction and chaos, overrun by the Plasmid addicted “splicers”. Infinite took the franchise in a completely different direction and unveiled the sky city of Columbia. And while the game briefly touched on Rapture with a quick jump through a time/space rip and the city of Columbia was truly a wonder to behold, the claustrophobic and dark atmosphere of Rapture was noticeably missing. 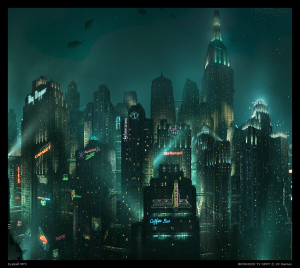 Rapture in all it’s glory

Columbia’s glorious skyscapes were fantastic and it was massively fun to go rail grinding through the air while blasting away at the enemies below but Rapture contains so many fond memories from the first two games. And so, to have the city where it all began returned to us with the brilliant leads of Infinite is massively exciting. Bioshock 1 and 2 only provided a glimpse of Rapture’s glory, brief flashback moments giving some idea of what the city was once like but up till now we’ve never really got to appreciate Rapture at it’s peak. The shot in Bioshock 2 in which the full city was seen for the first time was hugely impressive and the early gameplay teases we’ve seen of Burial At Sea promise a Rapture made up of lush, grandiose textures. And, hopefully, more Big Daddies and Little Sisters. The Big Daddies may have been absolute bastards to kill in 1 and 2 and the Little Sisters were creepy as all hell in the first game but they were also incredibly cool. 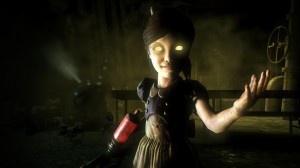 The ever adorable and insanely creepy Little Sister

While the first of the Bioshock games was truly excellent, particularly in the world it created, I never fully got on with it. There was too much of a disconnection from the character for me to properly enjoy what was going on. With 2 and Infinite, Irrational Games managed to tap into lakes of empathy with characters crafted to perfection. It’s interesting to note in fact that there is a strong similarity between Delta in Bioshock 2 and Booker in Infinite. Both are strong male protagonists, seeking to protect and save their daughters (biological in the case of Booker, adopted in the case of Delta). 2 and Infinite still rank among my all time favourite games and 2 in particular resonated with me. 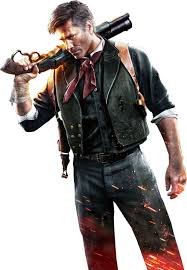 The roguish parallel world duplicate that is Booker DeWitt

Quite apart from the expanded Rapture story, the seriously sinister Dr Lamb and the beautifully heroic main questline there was one thing that made Bioshock 2 really special. You got to play as a Big Daddy. The ultimate badasses of the first game were still pretty damn hard to beat but you were now one of them. Which meant that you got your own Little Sister and a truly masterful story could be developed. It’s simple at heart but it’s why it works so well. Someone’s got to step up against the new Rapture tyrany, Dr Lamb and her insane, “Family”. Which brings me back to my original point, Big Sisters can really mess up your day. 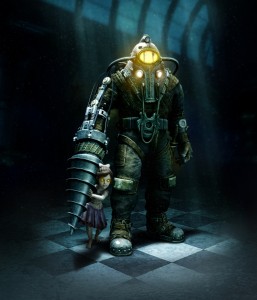 Subject Delta. Reminder of how badass Big Daddies are

If Big Daddies are the tanks of the Rapture world then Big Sisters are the ninjas. They leap all over the place, getting all up in your shit, using all the powers you can wield with what seems to a hell of a lot more force. The number of times I’ve had my head taken off by a ton of telekinetically hurled rubble… Anyway, the point is that, though Bioshock Infinite had some cool villains, such as the vague Big Daddy allegory that was Songbird, it’s real combat difficulty relied more on mass groups of simple enemies as opposed to the manic fighting machines that the previous games pitted you against. 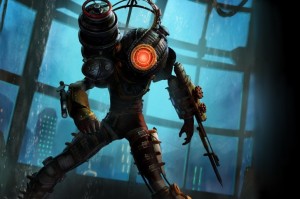 There’s so much to love about the Bioshock series and the earlier games did such fantastic work that I can’t wait to return to Rapture. Bioshock 2 is, to me, the pinnacle of the series in many ways, developing the potent blend of character, setting and carnage that has made the Bioshock franchise one of the best out there. Columbia has many charms and I will forever put Infinite on a pedestal but with the impending arrival of the roguish Booker DeWitt in Rapture, I can’t help but be excited to see how the man more used to dealing with radically minded humans (in the form of the Founders and Vox Populi) will deal with the chemically insane Splicers and those men in the big metal diving suits, the Big Daddies. Oh, and the fact that we actually get to play as Elizabeth in Part 2 is more than a little pants wettingly thrilling. I mean, who doesn’t  want to tear holes in space-time?