Clumsy controls and camera
Repetitive music
Too many collectibles

Unbox drew me in as I loved the look of the cute box characters and I’ve always enjoyed platformers, but unfortunately I found the controls a bit clunky and actually the fact that I was rolling a square box was a bit frustrating! If you’re looking for a new twist on the genre, then you’re in for a bit of a let down, but If you love collecting things in a cute and colourful environment, this is definitely the game for you.

Unbox : Newbie’s Adventure is a traditional 90s style 3D platformer in which you play as Newbie, a sentient cardboard box working for Global Postal Service, who are in trouble as parcels keep going missing and you are sent to collect them all and save the day.

Unbox isn’t really anything you won’t have seen before in a platformer, but it does have one unique mechanic, which is called “unboxing”. Whilst jumping, you can press a button to do a second, even higher jump which is caused by Newbie unfolding a layer of himself, which flaps him higher which I was a fan of. You get 6 unboxes and they can be replenished by using health boxes, which are luckily really easily found around the place.

The combat system is really simple and I quite enjoyed the fact that you just flop your butt down on enemies, or SLAM as the game calls it. Newbie also has the ability to aim fireworks at enemies sometimes.. though I couldn’t see how to do it, but still managed to do it right! This was a bit of a recurring theme to be honest, as I would often achieve something and not be entirely sure how it had happened.

The levels are quite open and I liked that you can go wherever you want – As long as you can jump there without falling in the sea, which may prove difficult more often than not. The main goal is to collect stamps, which you can do by rescuing little boxes from bad guys, races, fights and puzzles or just… finding them in a bush. There are also a hell of a lot of other collectibles, which I don’t think I will ever take the time to find unfortunately as I don’t think they get me anything. Games like the Arkham series reward logging in dozens of hours to collect riddles and such, so it would be something to look at in any future games… reward your gamers for crawling over every inch of the map! 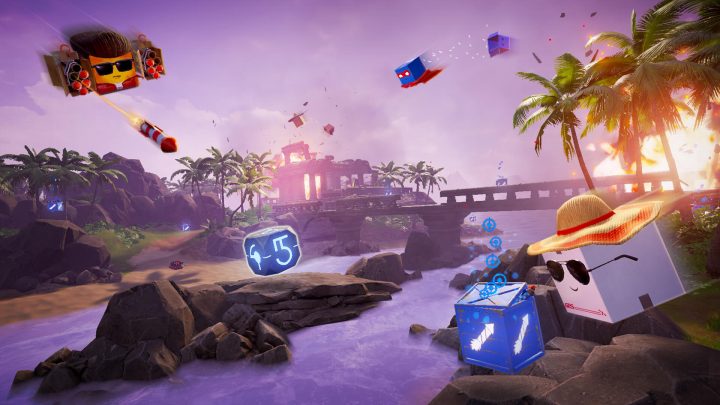 It’s a very pretty game, cute and colourful, but has some problems with slowdowns and skipping in cutscenes. I like that you can customise your box, but I only realised this was possible on my second load as it’s a separate option on the main menu! The soundtrack is what you would expect from the genre, but very repetitive and once you notice that it’s hard to ignore! The characters have garbled, Crash Bandicoot style voices, which I didn’t get on with.

Unbox also features split screen multiplayer, which allows up to four players to battle across multiplayer maps but I didn’t get to experience this as patch on the release day nerfed my copy and I wasn’t able to get it to run again even after reinstalling it.

Unbox is pretty straightforward to navigate once you get a hang of the controls, but the challenges are really hit and miss. I found myself getting quite frustrated on occasion, when I felt like I had been wronged by the game.

This being said I do feel as though I warmed to the controls as I played, but they weren’t set out in a way that you would be able to guess, which for me is quite a big thing as I have a terrible memory for things like that.

On top of this I found that it was difficult to judge the distance of jumps and I often ended up in the sea, which is absolutely fatal for cardboard. You are given a second chance if this happens however, as the game bounces you towards safety and the unbox command saved me more than once from a wet end.

On the upside you can control vehicles at various points throughout and they are actually really fun, but again the controls left me very sad. Games like Marble Madness are present here in spirit, but balls roll better than squares… as a wise old man probably once said.

Pretty and cute game, with potential but sadly not my box of tea.

Unbox : Newbie’s Adventure is out now for PS4 and Nintendo Switch.

Jamie McKeller is a writer and director who lives behind a desk on the outskirts of York. He eats a lot of soup and drinks more coffee than medically advised. Having spent at least a decade directing theatrical stuff, he had a spark of an idea to attempt making a web series in early 2010. He didn’t have a clue how filmmaking worked. Fast-forward several years, and he’s obsessed. Editing, writing, filming and eating soup with wild abandon. But now he has a beard.
More Goodness
Reviews