Seraph is a classic style arcade shooter where you are tasked with the job of cleaning up an invading horde of demons as they tear their way through the prison structure you have been held captive in. The idea behind the game is simple with the game auto-locking onto enemies as they come into range with the ability to target two enemies at once.

There is a story bundled with the game but its only shows at the start and end of levels with a short description of what’s happening and giving the game context. Not that this is an issue as the game doesn’t really need a story and it seems like a courtesy more than anything. You are encouraged to kill as many enemies as you can and to collect their life force in order to ascend and return home.

The combat system is simple and easy to follow as the auto lock feature makes light of the hordes of enemies that come your way. There are a number of different weapons to choose from including SMG’s, assault rifles and hand cannons, each with limited ammunition so its best to conserve your best weapons for the hardest targets. The game allows you to switch between which might not seem like a big deal but trust me, not all games do this. The player also has access to a number of special skills called “miracles” which do extra damage and require charging. These skills enhance the player experience by making you seem like a real badass, taking on large hordes and doing high amounts of damage with good looking special effects.

After first trying out the standard keyboard controls I often found it difficult to keep track and got my fingers crossed which resulted in a few deaths. There are a lot of things to keep in mind like dashing, skills, finishing off bosses, extra skills as well as dodging enemies. I found using a controller much better and really felt that the game was built with the controller in mind. The skill at which I played dramatically rose and I took far less damage.

When progressing through the game you have the opportunity to upgrade many of your skills and techniques. For instance you can heal yourself when damaging enemies or buff yourself when killing off demons.

The game itself looks great with soft and pleasing visuals but it did lack variety with the first 5 levels being almost identical in design and settings and the next “zone” being very similar. Some more variety would certainly be welcome. 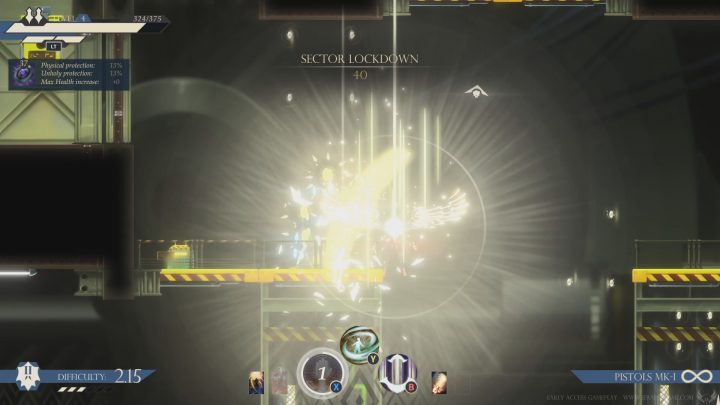 Seraph also has a “Twich” mode with allowed viewer to alter certain mechanics during the stream to mix up gameplay. The Streamer connects directly to twitch by entering their key allowing direct interaction. It’s a great idea if executed well and I foresee many interesting streams and chances for streamers to get creative with their content.

Overall I really enjoyed the game. It’s certainly well built in terms of mechanics and skills etc… Simple yet deep enough to get your teeth into. As previously stated I do recommend playing with a controller if your not 100% comfortable with your keyboard. I used an Xbox 360 controller and it was a good experience doing so.

In terms of what’s missing, I would suggest a more engaging story with more than just a few dialogue boxes and more variety in level design. It would have been nice to have seen some more interesting weapons too.