The zombie apocalypse isn’t really a new setting for video gaming, whether you cooperatively survive with friends in Left4Dead, made some hard choices in the Walking Dead or found that your fellow survivor can be more of a danger than actual Zombies in DayZ I think most gamers have done their fair share of zombie fighting over the years.

State of Decay mixes up this formula by concentrating on the survival aspect of a Zombie apocalypse, a crossover of Grand Theft Auto and DayZ this action RPG giving you the chance to organise and control your own little island of the living in a sea of the undead. I have discussed with friends about how we would look to survive a Zombie apocalypse, State of Decay finally gives us the chance to prove it. 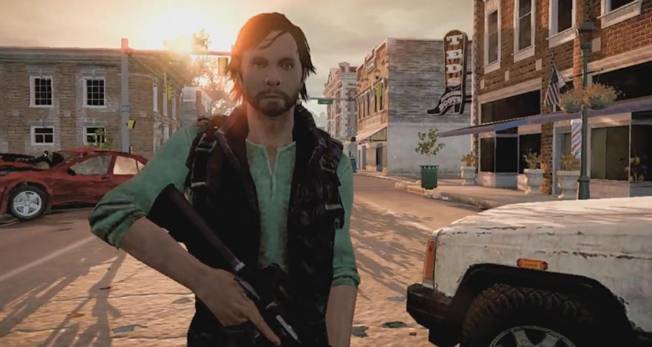 State of Decay begins with you taking control of Marcus, who along with his friend Ed, has been fishing and hiking in the wilderness of Trumball County for two weeks and inadvertently missed the Zombie Apocalypse. After escaping from a Zombie infested campsite with another survivor called Maya they eventually come across a group of survivors who have fortified a local church as a stronghold, at which point the game opens up into a sandbox world of scavenging and survival based around this initial home base.

Most games would have you continue to play as Marcus and follow just his story but State of Decay instead focuses on your small community of survivors rather than one particular person, allowing you to take control of anyone (apart from one NPC exception).  The game actually forces you to switch between characters on a regular basis; each character had a stamina bar which is quickly depleted as you do physical activities like run, climb or fight. The more you use a character uninterrupted the slower stamina recharges as they become tired so effective management of your survivors is important, having an exhausted survivor getting swamped by zombies can quickly result in their death as they don’t have the stamina to fight or flee.

This also means you become invested in your community as you play different members, when you don’t control them you will see them around your home base working or keeping watch, if you summon them to help you collect supplies it will be a familiar face who arrives not some never to be seen again generic NPC. They have their issues which need to be resolved and it’s pretty harrowing when someone gets infected and you have to make the decision on what to do about it. All this makes them precious, since death is permanent and losing any survivor amongst such a small community can have a devastating impact on morale, it’s a shame that this wasn’t expanded upon even further with tough choices to make like in the Walking Dead but as a system it works well enough. New survivors can be found and rescued via missions or befriending other communities, you are not the only ones trying to survive after all. The additional survivors bring many benefits, but having to many survivors can be a burden to your community as you will need to scavenge more supplies for each person.

Early on this might not be an issue as you are free to scavenge food, fuel, medical supplies, ammo and building materials from anywhere on the map, normally starting in the local area. There are plenty of abandoned locations to choose from from people homes to police stations, building sites and supermarkets but once you have searched and cleaned it out, there will never be anything there to scavenge again. This means that if you clear out all of the areas close to your home base, you will have to venture further and further away each time to acquire more necessary resources and the longer the journey the greater the risks. Needless to say as the game progresses and more people offer to join you it’s a tough choice of risk versus reward, can you support the extra people or do you need to take the tough decision to turn them away to conserve what you already have.

Scavenging doesn’t just find you supplies for the community, weapons, personal supplies and equipment for a character to use at first are plentiful although the same problem exists that once they are looted they won’t respawn.  Finding lots of weapons can feel somewhat redundant, a survivor doesn’t really need six different pistols, however you can exchange them with your community for influence which is a form of currency. Trade in anything from a high powered assault rifle to a bottle of aspirins and that will give you influence that could then be used later on to ask other survivors on the radio about supply caches, to call for backup or to establish outposts, little safe houses which your survivors can rest in. It’s not particularly complicated but it does make scavenging more rewarding. 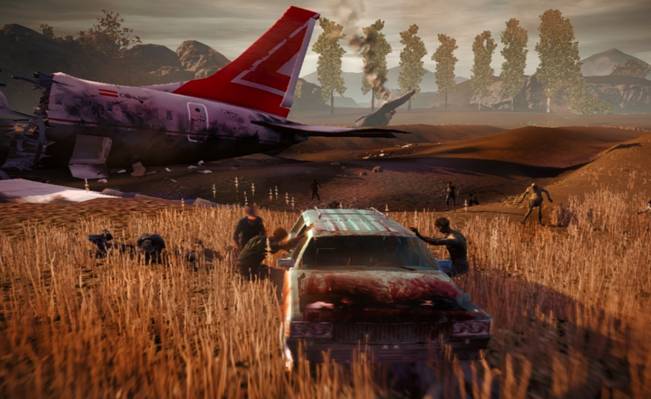 As the game progresses you will move around Trumball County and will be offered the choice of relocating to new home bases based upon the number of survivors and supplies you have gathered. In each home base you can build a certain number of facilities such as gardens, workshops and libraries which grant you specific benefits. The larger home bases can support more of these facilities but they also require more survivors to guard it, which in turn means you need to scavenge additional supplies to support them. It’s a surprisingly complicated interconnected system but successfully managing these issues is pretty enjoyable and feels rewarding when you see your little community thriving under difficult circumstances. On the flip side if you fail to manage things then morale can quickly plummet which may lead to survivors leaving to strike out on their own.

The main story line took me about 10 hours to complete, with missions involving other survivor communities, the military and even some local hillbillies. Missions are not especially long or complex but they keep the story going. In-between the story missions randomly generated assignments come up via your survivors radio room but they are not particularly varied, just a limited variety of missions to help survivors hold off zombie hordes, scavenge certain areas or clear out infested houses.

The combat in State of Decay is split between melee and firearms; I didn’t find any crossbows for the Daryl Dixon fans amongst you. Melee weapons like machetes, axes and my favourite, the common garden spade, have the benefit of being silent but using them requires stamina which once depleted their effectiveness decreases as your character slowly slugs away while winded. Hitting a zombie in melee is quite random, sometimes you will kill them with one hit, other times it can take multiple blows but you are given several abilities such as stealth kills and an instant kill on knocked down zombies to even things up a little, I soon became quite proficient in thinning out a zombie horde using these two moves before finishing off the final stragglers. Firearms adhere to the usual Zombie rules, aim for the head as a body shot won’t do much and shooting is like ringing a Zombie dinner bell so expect trouble. Some weapons can attach silencers which help but these only last for a set number of shots and always assume it will break at an importune moment. 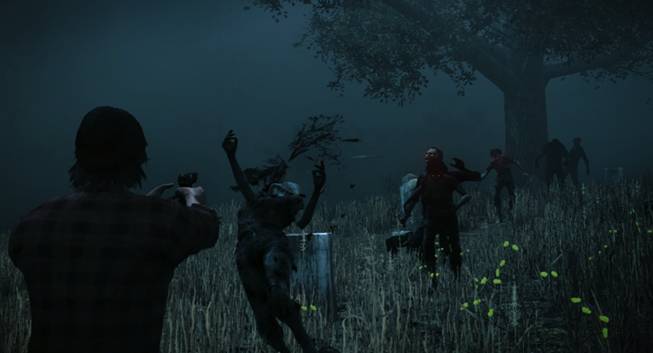 Graphically the game isn’t anything to celebrate and in some cases is pretty ugly, there’s lots of character to the ruins of Trumball County as you drive through it with plenty of wrecked cars on the highways, wandering zombie hordes and burning buildings giving the world a pretty devastated look but on the whole this isn’t a good looking game. There is a full day/night cycle which can be pretty tense as you creep around a town at night or downright terrifying when a zombie lurches out of the darkness behind you.

I encountered a large number of bugs and graphical problems, there are frequently some terrible frame rate issues, screen tearing and textures popping in and out which is especially hazardous when driving and up pops a solid wall. The bugs are not game breaking but they do diminish the game and are very frustrating; zombies occasionally seem to be able to walk through walls or closed doors, sporadic zombie spawns can ruin the immersion when one pops up right next to you, hidden infestations that you can’t see (zombie infested houses you should clear out) hurt group morale even if they are located in another town miles away.

The audio is reasonably good but the voice acting becomes repetitive, the same dialog gets repeated by different characters over and over again, a story about a zombie pony was funny the first time round but by the twentieth time I was ready to find this undead pony and have it eat the person telling the story.

Completing my set of complaints is that the AI isn’t particularly clever; mostly this won’t be a problem but can be frustrating and hilarious in equal measure. Marcus, my original survivor, went missing for several hours only to turn up in the building next to our safe house, he then complained he could not walk and needed me to pick him up in a car even though he was less than 10 meters from the front door. More frustratingly is when survivors that you are accompanying on missions decide to run off on their own, or even worse once the mission is complete decide to run back to the safe house via a big horde of zombies and get injured.

While State of Decay is certainly very rough around its edges I would suggest keeping an eye on this developers future releases as State of Decay could easily be expanded to include a co-op mode (the game is screaming out for such an idea if I am honest) and a follow up MMO is also planned. The game is astoundingly ambitious for an XBLA game and they have created an amazing game. While I have been somewhat critical of the games technical shortfalls I would recommend it to all Xbox 360 owners because for such a cheap price you will get many hours of entertainment.