Silent homage to the work of Stanley Kubrick and 70's Sci-Fi with some creative artwork and a great soundtrack.

Only for those who have always wondered what a 2001: A Space Odyssey game would be like if you removed all of the interesting parts.

As a young boy, I was always raised to not say anything if I couldn’t say anything nice and so for this reason I have chosen to keep this review much shorter than most of the others that I’ve written.

Since indie game development really took off during the last generation, the increasing might of legal digital distribution has changed the industry. For the first time in decades, smaller developers now have the freedom to express themselves and self-publish games that would likely never be greenlit by a major publisher. The effect of this is that PC and console owners are now able to access the kind of interactive experiences which would have once been considered beyond the limits of the medium. 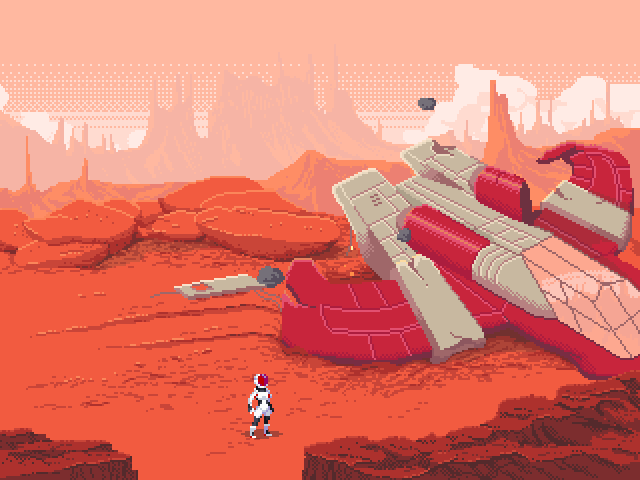 Of course, the other side of this is that some indie developers use these advances to release games that aren’t really fit for purpose. As much as it wants to be otherwise, Stranded joins the ranks of the poor quality indie releases and botched Early Access projects that demonstrate why more rigid distribution platform controls aren’t always necessarily a bad thing.

Developed by Peter Moorhead, Stranded takes place on a lost and distant planet after a lone pilot has crash landed. Overall presentation is very Kubrick-inspired and the aim is navigate the planet on foot and solve a small series of puzzles that will determine your survival. Gameplay mechanics are limited to a very simple, and excruciatingly slow, point and click movement system and all interaction takes place via an electronic communications device that is attached to the protagonists arm.

And that’s pretty much it. The player solves a small number of simple puzzles and then the credits roll. Early Steam feedback suggests that the game can be completed within 15 minutes, although my review play through lasted just a little over one hour. At a price of $7.99, this feels like nothing short of daylight robbery and the game lacks most of the creativity or polish that others in the same bracket often use to justify their price tag.

Sure why not. I’ve got nothing else better to do.

The 2D pixel style is tired and predictable and although there is occasionally some nice artwork on display, the retro-look is now becoming just a bit too over done for my liking. As an industry, we are approaching the point where visuals like this have lost their charm and are starting to look just a little too overly familiar and stale. The audio, in contrast, is absolutely this game’s best feature and succeeded far more in captivating me than any of the gameplay did.

In short, Stranded is a game which I absolutely cannot recommend. It has cemented the concerns that I have held for a while that some indie developers now just seem to be either looking for a quick buck or to market products based on their own passions without considering whether or not those products are actually marketable. The optimist in me hopes that Peter Moorhead is an example of the latter but Stranded regardless represents a slow and painful answer to a question that nobody asked. In a time when players are consistently bombarded with an over-abundance of choice, Stranded really is best avoided.