This is a special audio, visual and written review. that you can watch, listen to or read… fill your boots and enjoy!

Being a Geek, I have numerous hobbies and activities (so many activities! ) that I enjoy partaking in. Two of which activities (SO MANY ACTIVIETIES!)  I enjoy more than the others, to the point of mild obsession: Wargames and Military History (well I did do a degree in it)

It is therefore understandable that I have been a total war, fan boy since its first incarnation (Shogan total war in 2000) and have loyally bought and played every subsequent title. Here was a set of games that took Military History and strategy gaming, mixed them together, with a pinch of creative licence and came out with some of the best War games around! PLEASURE OVERLOAD PLEASURE OVERLOAD!

Fast forward 13 years, 8 games, 3 spin offs and many ex girlfriend’s later (nothing to do with gaming…. Ok maybe a little to do with gaming… I HAVE A PLOBLEM!)  and we come to not a new game, per say, but a reboot of one the best titles; Rome: Total War, originally named…. Total War: Rome II. 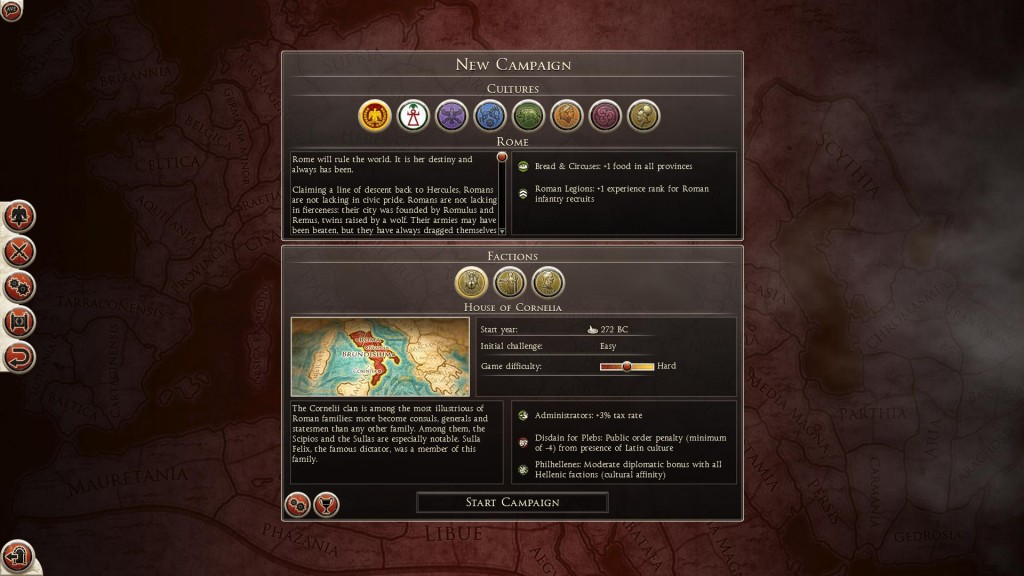 As you can expect there isn’t a massive change in setting from the original and is focused around Europe, the Middle East and North Africa; which feels a lot bigger after playing what is ostensibly quite a small area in Shogun 2. There is still a great number of nations to play (some broken down into sub factions like Roman clans, Carthaginian dynasties and Greek city states), the map is beautifully rendered, showing off nice little animations when you win or lose a battle, lay siege to a city, sink a ship, or expand your settlements and, as always, when you pick a fight the camera zooms into the two opposing protagonists before you choose to have at it in person or let the computer deal with the action for you.

One nice little add to this total war staple is that if you do chose the computer to fight for you, you can also chose how the computer fights as well: either offensively, defensively or neutrally. Each has its own benefits depending on the situation and the army you face: for example you wouldn’t want to fight defensively if your opponent had mostly skirmishers and ranged weapons because you would just get shot to pieces. Best you take the damage and wreak havoc when you get in amongst them.

Things CA have changed about the campaign map / mechanics are subtle but generally add to the gaming experience. City management is streamlined and despite being a bit confusing to start with (if you are used to the older system) works well; you can now set edicts for provinces you control, giving you bonuses in tax, food production and moral etc; the diplomacy tab gives you more of an insight into why people don’t like you (most of the time they don’t.. WHHHY DON’T YOU LIKE ME!?) Armies are not unlimited, growing as you empire does and you have to have a general for each one; resource centres (like mines etc) are no longer outside the city walls, as in all other TW games but encompassed within.

Armies have different stances when moving: Ambush, forced march, fortify and raid, the latter meaning your army lives of the land and reduces production of the area and increasing civil unrest; when wanting to embark your units to other lands, you DON’T have to build a fleet, as they automatically get ships to take them where they are needed (nice) and lastly you don’t have to recruit garrisoning troops to defend your towns as, depending on the buildings you have within, If you are attacked, you automatically get a defence force comprising of infantry, ships and plebs… one less thing to worry about.

I have to say I was quite impressed with these little improvements (little amuses the innocent and all) especially the fact that you don’t have to have garrisoning units. I always felt bad that those poor jos weren’t getting to see enough action but now when I build an army its sole purpose is to bring it to the uncivilised world… and then get unceremoniously wiped out by a bunch of farmers with rusty spoons and silly hats. 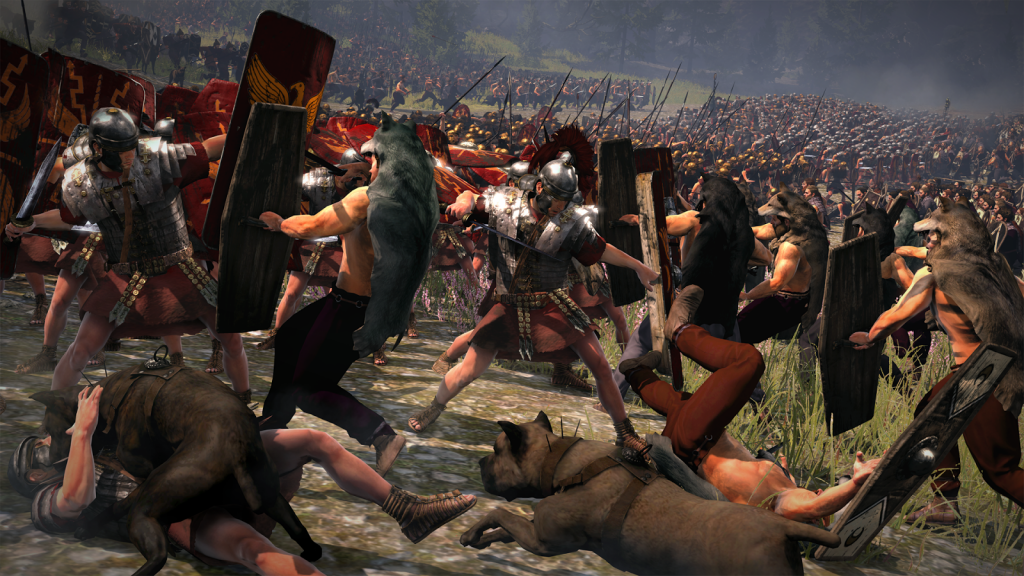 The Battles are, arguably, the main pull for total war fans and for many the sole reason they play the game at all. There is nothing better than building an army, gaining experience and marching it to victory over overwhelming odds, or more soul destroying than doing the same only to be defeated in a close run battle.  Battles are the proving ground in TW and you can be the best administrator in the land, but if you can’t win a stand up fight, you aren’t going to build an empire.

For those purists who worried that CA might mess with the mechanics you can let out a sigh of relief as the combat system, which has barely changed in 13 years, is still alive and kicking; with a few bells and whistles to keep things ticking over.

There are now a lot more options for your generals to use in combat, and so depending on what traits you pick, giving you an edge; capturing cites is not about running to the town square and standing there like a norman, or should I say Roman, as there are numerous points you can conquer; they have merged naval and land combat giving you the chance to engage in coastal assaults, which adds an extremely interesting dynamic to the proceedings; Line of sight has been improved to ‘true line of sight’ so you can really use the terrain to your advantage; and finally, the unit cap, although still 20 can be increased to 40 with reinforcements (a la medieval total war 2) When I found this out, it made me happy.

As with the rest of the game, graphics have been improved and if you zoom in you are met with different faces, gestures, speeches and comical insults, a nice touch that is made all the more satisfying by the introduction of cinematic mode, which allows you to zoom in as if on the march with your troops and move the camera around as if you were filming an epic movie…. Be careful with this new mode though as if, as I did, you forget to come out of it and give your units orders, they will just stand there and take a volley of spears to the face… ouch

All this being said though, I still feel a slightly underwhelmed. Don’t get me wrong I enjoy the battles and the coastal assaults in particular but as I said, things haven’t really changed that much mechanics wise form previous titles and for me that is slightly annoying. You still have the same sort of formations that you got in Shogun 1 and for a game that ‘prides itself on historic accuracy’, I cant help but be irked by the lack of historic formations and combat options, as well as for the same old problem that if you deploy in a town you cant get too close to the buildings…. No no, perish the thought of garrisoning said tall tower or being able to actually deploy units from one side of an ally to another without a gap!

Also, as much as the AI seems to be slightly more intelligent, blocking off key allys when attacking towns, charging your skirmishers and redeploying to face an encroaching threat, man can it also be stupid. Some prime examples are keeping a chunk of their forces, in a nice dense box so my artillery can bombard them with flaming shot, attacking me (a superior force) when they are on the defence and rigidly sticking to their defensive positions in cities, even though my cavalry is about to trample them to death from behind!

These AI issues also spill over onto the campaign map and some times you will find your huge army, replete with fortifications and support, being assailed by a raiding party of some second rate nation, only to be wiped out, with little or no loss to my forces… thanks for the XP… I guess? Or some ailing city state decides that its time to declare war on you out of the blue even though it has an icecube’s chance in hell to survive… I’ll be having your city then and you women and children as my slaves! 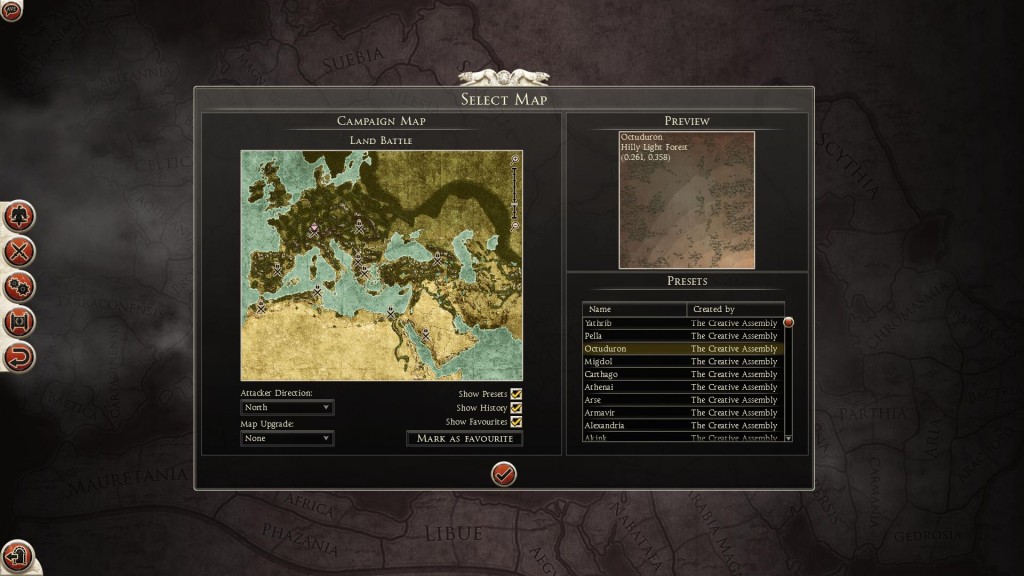 I have yet to play a MP campaign but I am a seasoned vet of Total War MP battles.. the increased challenge of finally beating someone of worth, instead of a mediocre AI, the elation at said victory and the frustration when you finally meet your match, and are defeated by an army of stampeding elephants or spear wielding Spartans camped in a corner.(RAGE QUIT!)

For those of you who do decided to venture into the unremitting and dog eat dog world of multiplayer, CA have laid on a fair few options for you to blood yourself on : MP Campaign, Quick Battles, Historic battles and, of course, head to heads (Ranked and unranked). Again, as above there isn’t a huge change from previous titles but they have tried to mix things up a bit with what is effectively the ability to fight a battle anywhere on the campaign map: Inland, coastal and at sea. My first battle was in the area of N. Ireland that is effectively where my village is… Imagine if the Romans had managed to take Scotland and Ireland eah… that’s a ‘what if’ and a half!

Suffice to say I was slightly impressed by this addition and if you couple it with new tweaks to the battles you will have a pretty good MP experience and one that wont result in battles occurring on the same maps.. over, and over, and over, and over again. Sadly as with good there is always the bad and as much as you get rid of the strategically and tactically challenged AI you will still find spam armies and people who have more interest in winning at all costs than playing a nice balanced game… but hey, War’s Hell and I cant blame the game for people being douchebags.

I am very much a man of, if it is not broken, don’t fix it but I have always longed for more in a total war game, things are always promised and never quite delivered and as much as graphics get better and innovation does come in dribs and drabs It just doesn’t seem to be enough for me and what seems a lot of other people.

Don’t get me wrong it is still a good game, enjoyable and with huge replay ability (especially when they bring out more DLC) but It’s losing its lustre and granted die hard TW fans like me will still probably still buy the new games but if they want to increase their fan base and not alienate the existing one, then they need to make changes and not just stand at the side of the pool and dip their toe in the water.

All in all good game, some nice bells and whistles but still more of the same, with questionable AI.