Who Should I Cosplay As??? 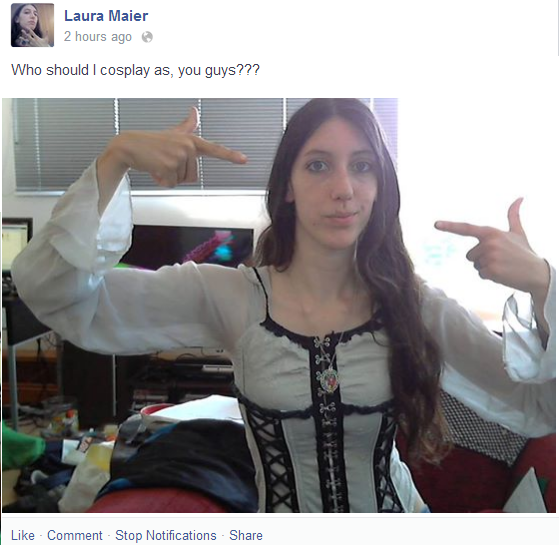 They are numerous. They are irritating. But, they are understandable.

Although it is infuriating to have your newsfeed clogged up with the faces of people you’ve never met and probably never will, it is a valid question. Let’s face it, despite the warm and loving heart of the cosplay community valiantly insisting that anyone should be free to cosplay whoever (or whatever) they like, there is still a mindset that if you don’t bear a perfect physical resemblance to your chosen character, you shouldn’t bother. It’s a sad fact that, for every cosplay champion posting pictures of a plus-sized Power Girl or a black Jean Grey and shouting “THIS! IS! COSPLAY!” while kicking naysayers into a bottomless pit, there will be trolls lurking to point out that your boobs/biceps aren’t big enough, you’re too fat, too skinny, too plain, your nose is too big and your teeth are weird. It sucks. We’re doing a pretty good job of policing the community, but it’s still a prevailing problem.

So, against the backdrop of this judgement culture, when I see yet another selfie on my wall, my mind instantly translates the innocuous accompanying question to: I want to be a part of this amazing, fun community, but I’m worried people will laugh. I don’t want to look like an idiot. Before I invest any time, effort or money into this, please just tell me straight- am I good enough?

To which the answer is, of course you fucking are! But my well-meant words of support are an inadequate shield against hurtful comments, especially when there is (unfortunately) an infinite respawn point of internet ne’er-do-wells, and (even more unfortunately) only one of me. But that’s OK, because I also have some practical advice for choosing a cosplay! And since you’re already asking strangers on the internet for help, you could do a lot worse than this stranger right here. Just sayin’.

The first thing to consider is: Who do you love?

The point of mining my mates for suggestions was, at first, to illustrate how ridiculous such suggestions are, and I think that point was well-made…

But there were many more that made me think “Hmm… yeah, I guess…”

…but I didn’t really feel the lightning bolt of inspiration hit me. Take Marceline for example. Do I look like her? Sure. Do I like her? You bet your buttons I do! But I don’t love her in the same passionate way I love, say, X-23. Plus her costume seems a bit plain – if I’m going to dress up, I’d like to wear something that I wouldn’t wear to the shops on a normal day.

But loving a character isn’t enough sometimes, so that brings us to the second question you need to ask yourself: What do you feel comfortable with?

As far as I’m concerned, there is no amount of exposed skin too much, no heels too high, no spandex too tight. That said, I don’t feel comfortable crossplaying, for reasons I wish I could articulate better than “yeeeeeeeah, no”. I don’t like the idea of putting my own spin on a costume, because my design skills are adequate at best, and a burlesque Spider-Woman, while awesome, would feel out-of-character and unnecessary. And I seriously don’t feel comfortable cosplaying characters of colour because I’m worried somebody might think I’m a racist. Everyone has different limits, is what I’m getting at. But, if there’s something about a costume that makes you uncomfortable, you can always change it. Big Wonder Woman fan, but wish her skirt wasn’t quite so short? No reason why it can’t be! Love Namor but don’t love the speedos? Try his costume that’s actually, y’know, a costume:

And it’s OK to not be totally fearless. When I went to Bristol Comics Expo last year, alone, dressed as Zatanna, I was thinking pretty much nothing but Ohmigod people are going to think I’m a total slut why couldn’t I have picked Squirrel Girl or Supergirl or LITERALLY ANYONE ELSE ohmigod I have to change I should change. But you know what? Meeting cool and supportive people at the con -including a Leeloo much braver than me!- made all my concerns about looking like a skank-ass ho evaporate. Which was good, because later that day I spent two hours stomping around Bristol with a popped shirt button trying to find my damn hotel.

So I have a suggestion: use the Facebook groups. But don’t ask “What should I cosplay as?”. Instead, try “Who wants to hang out?”.

(And if you genuinely can’t decide who to cosplay as, make a list and roll a d20. I guarantee you it’ll be more help than the internet.)