A Review of Asylum 12 – A Convention for Fans of Supernatural

Asylum is a twice yearly unofficial convention for the fans of the TV show Supernatural. I have had the pleasure of attending this event twice, once as a fan and more recently on behalf of Geek Pride. 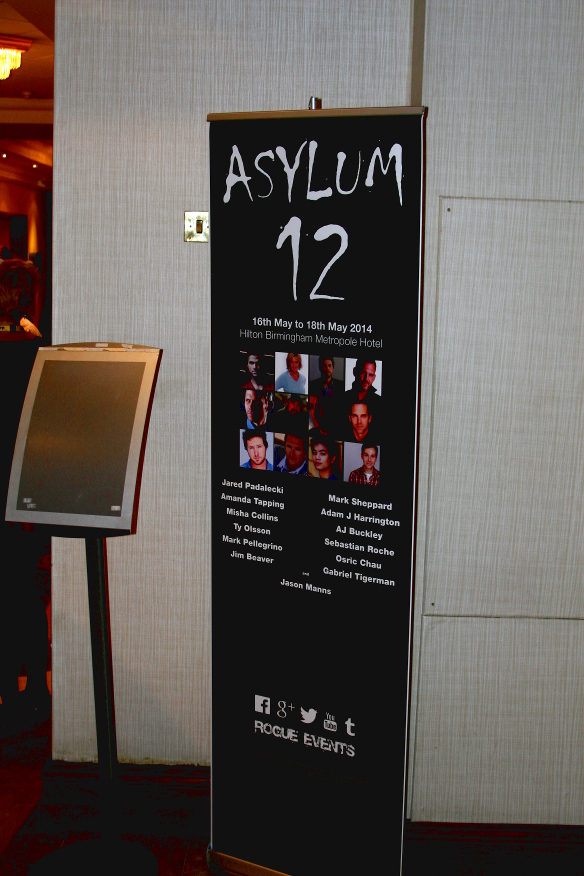 Taking place at the Birmingham Metropole hotel, Asylum 12 quickly sold out not surprising considering the guests it attracts like Misha Collins, Jared Paldalecki and Mark Sheppard. This year it seemed the con was spread more widely across the hotel which, unfortunately, resulted in us getting a little lost, but that’s ok because there are plenty of staff and stewards around to point you in the right direction. Be nice to them, they have a hard job of keeping things running and making sure everything is going to plan.

We decided to spend most of our two days hanging out in the lounges with the guests – you can read about that HERE. However, I want to talk about the convention as a whole.

The first and most important thing to say is how lovely the fans are, it is obvious that over the years many friendships have formed and witnessing people meeting up after a long time apart is very touching. Everyone has one thing in common and that is a much loved TV show. This is what makes the experience unique, the average comic convention houses many people who have many diverse loves – like we all do – but an event such as this, has a more family feel and sense of belonging about it.

The package included in the ticket price is actually very good, it almost ensures you get to meet every guest. The only downside being that a couple of the guest autographs aren’t included in the price. They can be purchased separately though, but this adds to the time you are going to spend queuing and there is already a lot of that. Don’t despair though, chances are you’ll spot your idol a number of times during the event. For instance we walked past Ty Olsson having an outside ‘break’. He said hi we said hi, it was all very pleasant even if I had to subdue the urge to fan girl out.

Yes with such an event you have to expect to queue and whilst this frustrating and inevitably means you will miss out on the odd stage talk here and there, you’ve got to weigh up the pros and cons. On the one hand you have spend a lot of time in a queue, on your feet just waiting, but the great thing is at the end of that you are going to meet that guest and have that moment with them. For that reason, I only recommend buying the photo opportunities you really, really want. It’s worth bearing in mind that if you plan on making the con an annual event then the chances are it will only take a couple of years to complete the set. 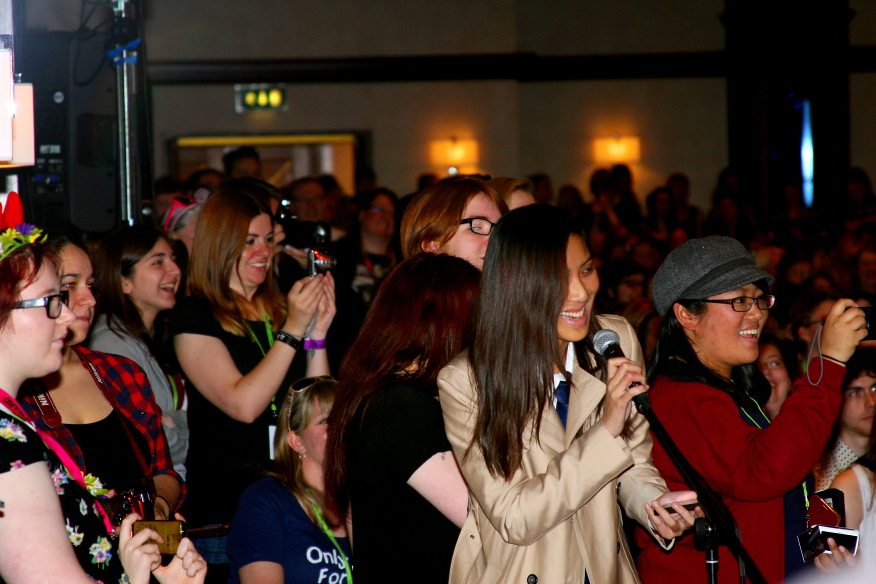 The highlights of this con are definitely the stage talks, with each guest – sometimes a couple at once – taking to the stage and answer the eagerly awaiting fans. The talks are free, but I advise you to get there early, each one we went to was packed out with people standing all around the room when seats ran out. Honestly, it could have done with a bigger room, but I guess that is a venue issue. For those positioned right at the back, each talk is filmed and projected on to white screens, so even if Misha seems to a mere dot, you can watch the screens so you don’t miss out on the action.

For the Misha and Jared talk I got to hang backstage and would like to pass on my sympathies to poor ol’ Scott. Scott was the host of the talks, introducing the guests and making announcements. The downside of this role was when he had to let the crowd know when things were running late, which didn’t always go down well. He also had the tough job of trying to get the guest of stage when their time was up, unfortunately this was met with boos from the fans. Bless him, he did a great job despite this. 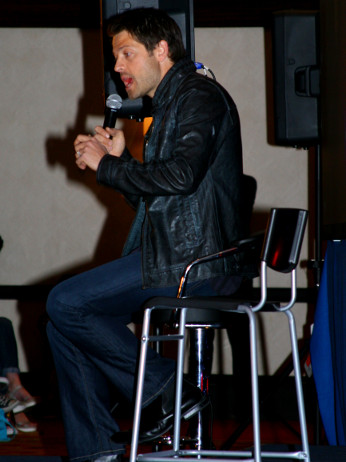 Misha Collins during the stage talk

This brings me to the issue of timings. I imagine putting on such an event takes a ridiculous amount planning and time-tabling, this inevitably means some things don’t run on schedule. Whether this is the fault of the organisers or (more likely) the guests I can’t say for sure, but late starts meant everything else from the lounges to photo ops were pushed back or rushed. The good thing about Rogue Events is that if you pay for your photo op, you are going to get it, even it that means some of the guests staying later to get them finished. It is important for anyone attending to follow the @rogueeventslive account, this is used throughout the con to communicate photo op, autographs and lounge calls, as well as informing people who has won the number of competitions held over the span of three days.

Cosplay was something that I actually expected to see more of, I’ve included a few pictures below of some we were able to catch up with – yes I had to run through the hotel chasing people blissfully unaware I wanted a picture. The cosplay levels don’t compare to the ones you would see at general conventions, but it doesn’t mean that weren’t appreciated and commented on.

Overall I stand my statement made in my preview article, the Asylum events are an absolute must for fans of Supernatural. It is very different from the typical con and is a more satisfying experience. You can spend as little or as much as you want and are guaranteed a fun and worthwhile experience.

You can purchase tickets for the next Asylum event in October HERE, and if you are a fan of Teen Wolf or Vampire Diaries they also have events for you: Wolfsbane & Insurgence.

Misha Collins during the stage talk

Mark Sheppard during his stage talk

Editor and occasional writer for Geek Pride! I prefer Star Trek over Star Wars, collect comics and wish I could be a superhero one day. I tabletop RPG as well as a little gaming, design the odd t-shirt now and again, update my Geek Parenting Tumblr and when I have cash to spend (which is rare) I scour the internet for Wonder Woman collectables. Also Doctor Who and Firefly rock!!
You might also like
Asylum 12conventionMisha Collins

Geek Pride Chats to the Guests at Asylum 12