Crowdfunding the highs and the lows of being a backer – a cautionary tale.

Recently crowdfunding has become a pretty big thing and  is used to raise funds for pretty much anything within the guidelines set out by the platform, whether it’s Levar Burton’s phenomenally successful Reading Rainbow campaign, to the recent Veronica Mars film and the critically acclaimed art house tinged revenge thriller Blue Ruin ,crowdfunding allows for the creation of numerous books, comics and other things.

Crowdfunding isn’t an easy win though, anyone thinking that people will pledge money towards anything after the success of Zack Brown’s Potato Salad needs to wake up and smell the reality, it should be noted that Brown recently held a massive street party called “Potatostock 2014” and has teamed up with a local charity which helps fight hunger and homelessness following the massive success of his campaign.

Anyone thinking they can just bang something out over a weekend and watch the pledges pile up will be in for a rude awakening once their campaign goes live. If your price points aren’t right then no-one will be pledging anything and lets not forget that not crunching your numbers properly can leave you massively out of pocket when it comes to delivering physical rewards, especially to other countries. 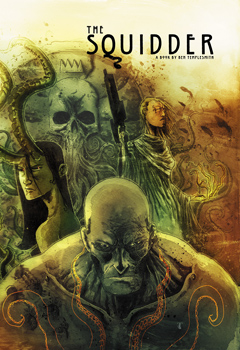 occasional missives from the frontlines of Retail Hell). Two campaigns have really highlighted to me the big contrast between how crowdfunding campaigns can be done and how they should be done if campaign runners want to make a good impression and make people think about backing future campaigns.

Both of these campaigns were by indie comics creators the only difference being one has a higher profile than the other. One of these campaigns was The Squidder from art collective/publisher 44 Flood (which is comprised of  Ben Templesmith, menton3 and Kasra Ghanbari), the other being NO SLEEP TILL….. NYCC from indie publishers Creature Entertainment and Cosmic Times. Both campaigns were successful with both exceeding their goal, The Squidder dramatically so, my aim is not to compare how successful they were but rather what happened afterwards and how they communicated with backers- which I know as I’m one of them.

The Squidder has issued 37 updates from December 2013 to present averaging one every week or two to within days of each other, these included several videos in which Templesmith explained his creative process at the start of the campaign with others featuring photo’s of various things as things progressed. One of these videos in July, following an update at the end of June stating the book was finished and set to be printed, featured the team at 44 Flood explaining the delay in printing of the hardback book which had an estimated delivery date of May 2014, whilst the single issues of the The Squidder were set to appear on shelves imminently from indie publisher IDW. Not only was Templesmith being upfront about their problems (transparency is the best move), it shouldn’t need saying that communication with backers is essential (but more on that later), the reason for the delay was trying to find a more ethical printer, which as far as reasons go is a pretty damn good one.

The book arrived recently and it was definitely worth the wait.

This contrasts massively with my experience of the NO SLEEP TILL…..NYCC campaign which has so far issued 40 updates since September 2013.  The book was set to be finished by the end of November, a later update stating putting the finishing touches on the book in December, this  would line up with their stated January delivery date.

Let’s have a look at why and get a lesson in how not to communicate with backers, these are taken from updates via Kickstarter. I’ve edited some of them for brevity.

January 24: “we had some trouble with the printer lately and some of the books have been off color wise, but once they are in will be getting in touch with you all!”

March 5: “……putting the book out soon. I know it took us a bit but we had a bit of problem with getting everything lined up and getting our ducks in a row…..” 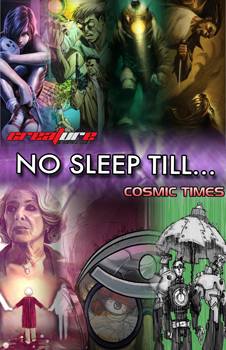 June 10: “Sorry for the delay folks, but between the cons (which you helped us get out there, this year) and Events (again you helped) and the new books we’re working on (again, you) it was hard to get back and touch base and get this out………….As for physical rewards, we will be sending this to the printer next week and form there putting the packages together for each one of you”

The most recent update on September 29 says this,

“Well the long and short of it is, THE BOOK IS COMING. Now why so damn late?

Files were corrupted and in many instances  totally lost. The only thing we had left of the file is the low-res pdf. We were lucky enough to find in our back up a high res of the pdf, but it wasn’t good enough for print, so now we have to reconstruct it from there. it is happening though, but at snails pace. Alongside that we have been incredibly busy with out own projects that it has been, to say the least, the hot potato here. We are working it, and think by the end of this month October we will be sending it to print and then out to you guys, after it being signed.”

Saying updates are an essential part of any crowdfunding endeavour is kind of redundant but it should be stated that you can’t underestimate how important this stuff is. Updates should be informative, regular and relevant to the project, whatever it is,they shouldn’t just be blocks of text either if at all possible, photo’s of things convey a lot whether it’s proof copies of a book arriving, a finished prototype or something else which shows some form of progress being made or indicates that people are actually working on something. The updates in this case have given little in the way of actual progress on the production of the book itself, with no photo’s and still only the original concept cover as featured at the start of the campaign. This is particularly important as the campaign was to fund both the publication of their compendium and a visit to NYCC. There’s evidence of the latter but very little of the former.

What updates shouldn’t be used for is to spam people with stuff of little relevance whether it’s other crowdfunding campaigns that a friend of a friend is doing or a stream of upcoming con appearances for example, this is especially true if it’s in place of updates on the actual thing the campaign is for. As a backer I want to know what’s going on with the thing I pledged my money towards not the details of twelvety billion upcoming con appearances or other things which you should be promoting via other channels.

Another big thing with crowdfunding is shit happens, things get delayed that’s pretty much guaranteed for anything. The major thing is to be open and clear about shit happening and letting people know what’s going on with regular communication and how whatever the metaphorical shit is will affect things. Waiting weeks or months in this case to tell people that a book that’s already delayed by several months is delayed again (without showing any indication that this book is actually a tangible thing) is a prime example of how not to communicate shit happening. There’s nothing worse than making backers of your campaign feel like actually they don’t really matter, especially since you already have their money.

Andy Haigh started writing to counteract the brain atrophying effects of Retail Hell, now it's an addiction. Andy is an unrepentant sequential art absorbist and comics are one of his passions. Other interests include Film, Music, Science Fiction and Horror novels and quality TV like Game of Thrones. He can talk about these at great length if only someone would listen. He lives a somewhat hermit like life in The Shire, spends too much time on social media and is still waiting to go on an adventure.
More Goodness
Ben TemplesmithCrowdfundingThe Squidder