So, you may have guessed from previous articles such as my look at Batman Europa, I am what you might call a DC Comics fanboy.
Now don’t get me wrong, I enjoy Marvel. I enjoy Marvel a lot; The current run of Iron Man and Spider-Man 2099 are on my reading list, but there’s just something about DC that grips me more…

But, GP have already done the DC vs. Marvel question before and I really don’t want to get into that debate right now. However, feel free to put your opinions and which side you’re on in the comments.

No, what I want to talk about today is reboots.

No, not this one… Maybe someday though.

If you set aside their flagship characters, DC Comics are probably best known for the number of times somebody has slipped in the office and caught the reset button.
“Oh, hey Joe, I brought you a cup of co-oh no! I tripped on my lace and made Crisis happen…”

Now, this isn’t necessarily a bad thing. Crisis on Infinite Earths, for those who haven’t read it, was a massive crossover event back in the mid ’80s that brought DC characters from the past, present, future and alternate dimensions together to face a giant, Multiverse threatening entity known as the Anti Monitor.
Now, as well as some fantastic dramatic moments which I won’t mention because you need to go and read this comic, Crisis smushed all the DC universes into a singular universe, for the most part, ish, kinda… But who cares, it was frikkin’ cool!

There were a few more crossover events and Multiverse mashups over the years, but then somebody sneezed and hit the button again in 2011 and created New 52. 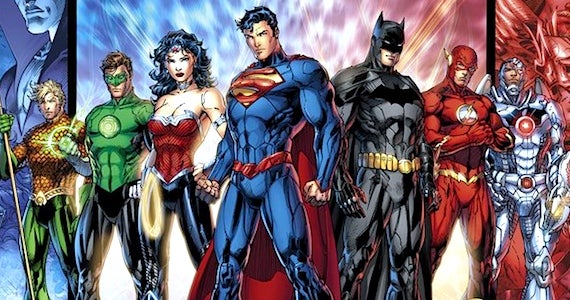 The main change in New 52 was Wonder Woman wearing trousers and Superman learning how underwear works.

Seriously. They need to put that button in a cabinet, or lock it away or something.
But for the most part, New 52 was a good thing. It essentially made a new universe with new stories and new takes on characters, starting from scratch at issue 1.
A lot of DC traditionalists were hesitant about this venture, but sales increased and the reader population grew substantially, so New 52 was the new black.

Convergence was another multi-title Multiverse crossover event that ran in the Spring of 2015 for two months. Again, seemingly all powerful being threatens the Multiverse, but this time by pitting the universes against one another.
Now, naturally, being big damn heroes (ain’t we just), they turn around, say “Sod that” and fight the big bad and…

DC then ended Convergence with all of its universes now being considered canon again. Familiar old titles now returning to the shelves among new favourites, bringing back some of the fans that New 52 had driven away.

So, all has been well in the DC office for a while. Robin War is their big crossover event at the moment. The TV shows are doing well. Suicide Squad is just around the corner from its cinematic release and the new animated movie Batman: Bad Blood is out soon also.

Then Ricky the intern comes along, showing off to Sally in accounts by juggling Batarangs, misses one and drops it onto the big red reset button once more.
I mean come on… Seriously?!

That’s right. DC Comics have announced that this coming June, there will be another reboot to their franchise with lots of series beginning again from issue 1. They have stated that this reboot will bring the comics more in line with their other media projects such as the new movies and their TV shows.
What this means for DC and the characters that we know and love who haven’t yet been transferred over to the movieverse is as yet unknown and I suppose we shall have to wait and see.
For the moment, not much else is known about this proposed reboot, but I’ll be sure to keep my eye on this and see how it develops.

I, for one, am hesitant about this news because I think that the DC franchise is doing fine currently. Naturally, my opinions won’t make a difference and this reboot will more than likely still occur but one thing is for certain – If they get rid of Dick Grayson, I riot!

Craig has been raised on geekery from a young age when his Mum introduced him to Star Trek the Next Generation on TV as a kid. Since then, he has gained a wide love of all things "Geek", be it books/comics, cinema or gaming in all formats. He has a particular keen interest in all manner of RPG, be it on a tabletop or in a field larping.
More Goodness
BatmanComicbookcomics