Guardians of the Galaxy #2

Who are these characters??

Peter Quill and the rest of the Guardians fight off the invasion of Earth by the Badoon with the help of Iron Man. Whilst a flashback to a clandestine meeting of Peter’s father, the King of Spartax, and the ambassadors of the galactic empires sheds light on the situation.

It’s only the second issue and already Bendis has the team up to their necks in action.

It’s quite a change to see London being targeted rather than the usual New York and the numerous images of the Houses of Parliament or Big Ben in the background as the carnage unfolds really make a difference.

The art from Steve McNiven and Sara Pichelli makes the action pop in this issue, there’s a lot of stuff going on as the Guardians split up to take on a ship each. There’s some great panels of each characters actions as they set out to scuttle the Badoon ships with Gamora and Drax being the highlights.

Iron Man not a fan of Captain Britain. 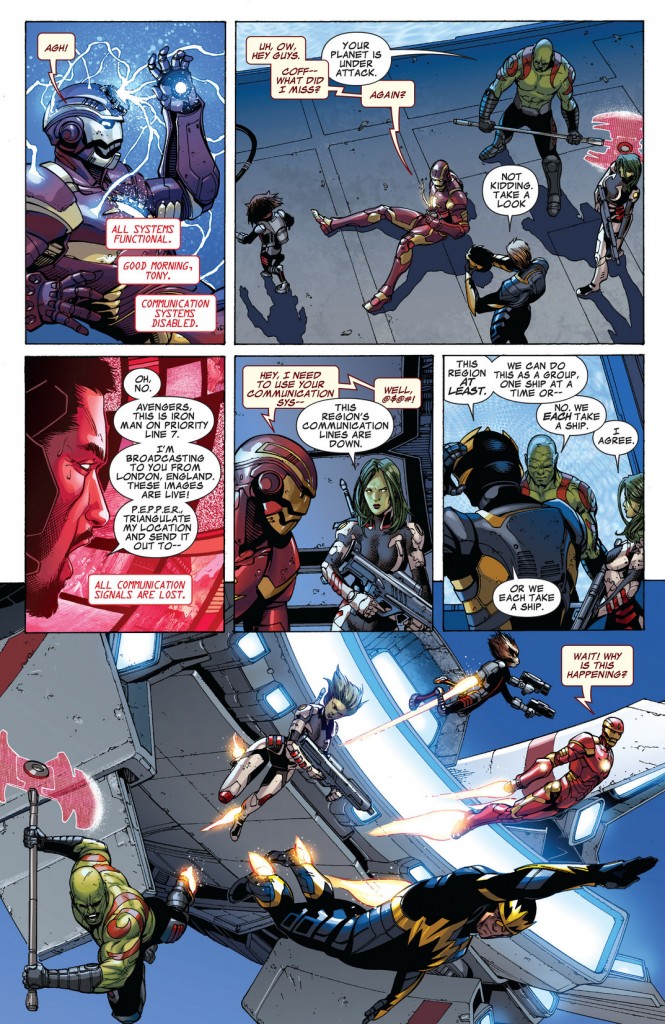 The Machiavellian plotting of Peter’s father makes for a good contrast to the action elsewhere and breaks things up before there’s any danger of fatigue setting in.

What this series really suffers from though is not establishing these characters at all, there’s no mention of why Gamora is ‘the most dangerous woman in the universe’ or who Drax, Rocket or Groot are, as though it’s a given you’ll already know these characters if you’re picking it up so there’s no need to waste time explaining who they are.

This isn’t a good way to get new readers and because of it Iron Man seems to be lynch pin of the issue purely due to being the only character new readers will recognise.

This lack of establishing characters is even more true of Groot, who was reduced to a splinter in the first issue with Rocket fretting this issue over whether his friend will grow back.

Having Quill trying to contact Earth’s heroes like The Avengers and Fantastic Four as though they’re incapable of dealing with anything on their own, makes the Guardians or more to the point, Peter Quill, look like a light weight too.There’s some great action and some interesting scheming going on but it doesn’t really mean a great deal without knowing who these characters are.

Andy Haigh started writing to counteract the brain atrophying effects of Retail Hell, now it's an addiction. Andy is an unrepentant sequential art absorbist and comics are one of his passions. Other interests include Film, Music, Science Fiction and Horror novels and quality TV like Game of Thrones. He can talk about these at great length if only someone would listen. He lives a somewhat hermit like life in The Shire, spends too much time on social media and is still waiting to go on an adventure.
More Goodness
breakingcomic bookcomic books