The high, although justifiable, cost may deter new readers, and existing Dredd fans will already have many of these titles.

Despite the cost, Judge Dredd: The Mega Collection remains an excellent collection for comic fans new to Judge Dredd. Existing fans will likewise to snap up these graphic novels, filling the gaps in their collection.

“Justice has a price. The price is freedom”
(Judge Dredd: America, by John Wagner)

2000AD has long been an institution of British comics, ever since it was first published in 1977. The fact that it is still the only weekly science-fiction comic continuing to this day gives us an indication as to its excellence. Whilst 2000AD has introduced us to a vast array of characters, their most iconic is probably Judge Dredd.

What makes Judge Dredd such a fascinating character is that he is often written as a reaction to contemporary culture. The Apocalypse War for example, was written in 1982 in response to the ongoing cold-war between America and Russia, and despite the storyline being over thirty years old it continues to remain a thrilling saga, which is a testament to John Wagner’s writing.

However, Judge Dredd’s ongoing storyline spans over three decades, which can an intimidating back-story for new readers wanting to understanding the world of Judge Dredd. The aforementioned Apocalypse War storyline is one such example, as the ramifications continue to be felt in this series. It is for this reason alone that Judge Dredd: The Mega Collection is such a tempting offer.

Judge Dredd: The Mega Collection starts with America, which is quite possibly the greatest Judge Dredd story to be found, and whilst the original graphic novel included the two sequels to America (America II: Fading of the Light and Cadet), the Mega Collection also includes stories featuring Judge Beeny, further continuing the America saga. Many of the stories have previously been released as graphic novels, yet they have rarely felt as complete as they do here. 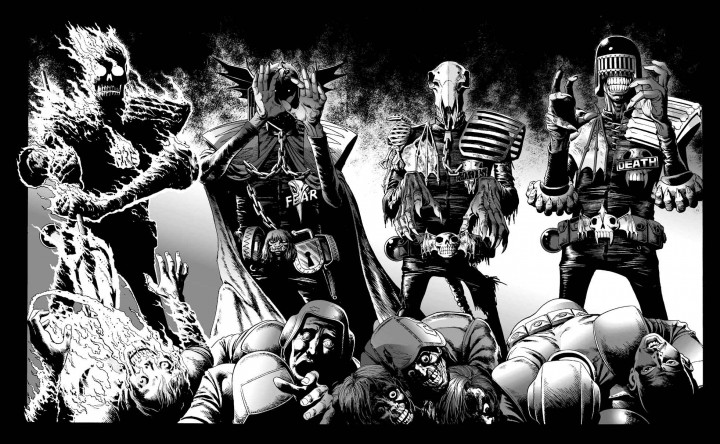 Despite the title, Judge Dredd: The Mega Collection includes storylines centred on characters other than Judge Dredd, such as Judge Anderson. The character of Judge Anderson makes an excellent humanistic counter-point to Judge Dredd’s obsession with the law.

The artwork has been carefully reproduced from when it was first published, which must have been no easy task given the Dredd’s long history. Artists include Judge Dredd co-creator Carlos Esquerra as well as Colin MacNeill, and remain as exquisitely visceral as when they were first published.

The covers for the Judge Dredd: The Mega Collection are simply gorgeous. Hachette have taken a panel from each storyline, stripping it of all colour, before adding the occasional touch of red to create a series of striking covers.

Part of me wonders who Judge Dredd: The Mega Collection is designed to appeal to. Existing fans will already have many of the storylines that are collected here, and thus unlikely to want duplicates they already own (despite how good the covers may look). Likewise, £20/month may seem steep for casual and new fans; however, this is not an unreasonable price for what will be two excellent graphic novels a month.

Science Fiction: the final frontier. These are the articles of the freelance journalist Peter Ray Allison. His continuing mission: to explore strange new realms of fiction, to seek out new genres and new visions of the future, to boldly geek where no one has geeked before.
More Goodness
2000ADcomicsgraphic novel