by Cristina Bogdan on 16/02/2015
Details
PublishersComics
By

Being an anthology it offers small snippets of larger stories that might leave some readers unsatisfied.

It's more than worth a read!

Generally I’m not a big fan of anthologies. Some of them take months, if not years to come out, leaving me hanging for resolution, while others simply collect everything, whether good or bad and throw it between two nice covers, leaving me frustrated. Meanwhile isn’t part of these two categories, something I’m infinitely grateful for. 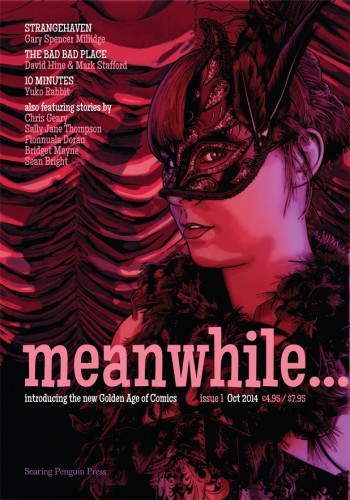 Published by Soaring Penguin Press, Meanwhile collects works so different from one another, so unique that no one will be left disappointed. You will find a little bit of everything in it, in terms of design and story. While not everything is for everyone, I doubt anyone will be able to look through the pages and find nothing of interest.

The anthology (which already published its second volume) features stories from authors such as: Yuko Rabbit, Krent Able, Euan Cook, David Hine and Mark Stafford, as well as Gary Spencer Millidge, Jenny Robbins. Different styles, different takes on art, all coming together to a wonderful effect.

Like everyone, I too had a favourite story: 10 Minutes, by Yuko Rabbit, the tale of a girl, Judita, who is forever bound to a tower, in order to preserve gravity in the world around her. Take three guesses on whether she likes it in there. That is not to say that Strangeheaven – Gary Spencer Millidge’s brain-child is any less enticing. Because it is. The puzzle that Strangehaven slowly completes itself, but so far there is no resolution in sight. I am anticipating issue number 3 for another piece of it. Trust me, it’s that good and definitely worth the wait and the money.

For those who are more into the horror genre, you have The Bad, Bad Place, a tale that started in issue 1 and continues with issue 2, about a mysterious house that draws people in, to never be seen again. It’s a story that actually drew me in from it’s first pages and it still fascinates me. While it might seem like a “seen it before”, horror cliche, the way the events are depicted and the way they tie together make for an original effect. And for issue number 3 it promises “More woe and misfortune.” I’m in! 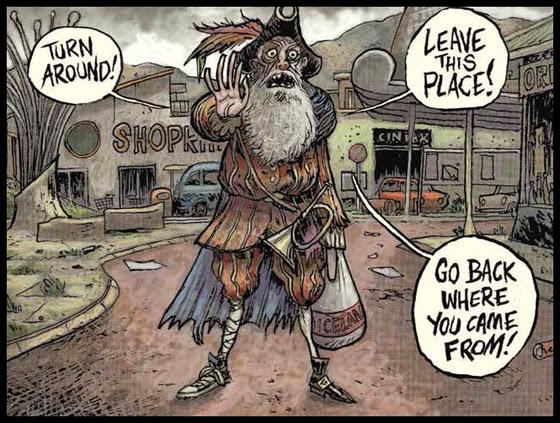 Speaking of issue number 3, it will apparently feature a manga style comic strip based on Shakespeare’s Sonnet 18. Since I love Manga in general, I’m in! (I was already sold, so perhaps my excitement seems less genuine, but let me assure you, it is not.) Add to this the fact that Meanwhile opened my eyes to a whole range of artists I was unfamiliar with and you have the perfect recipe for turning me into quite the fan. I doubt I’m the only one who found something similar when turning the pages of this anthology. If you’ve yet to read it, get to it. A whole new world, my fellow geeks! A whole new world!

What's there to say about me? I love the sci-fi and fantasy genre when I read, but I am in no way limited to that alone. I do think Frank Herbert deserves a statue for his writing(if there is one, point me in that direction, please). I enjoy writing quite a lot, but I am also kinda lazy. If you want to make me happy give me books or Doctor Who collectibles. Or a real TARDIS, in which case I will love you forever.
More Goodness
David Hinesoaring penguin press