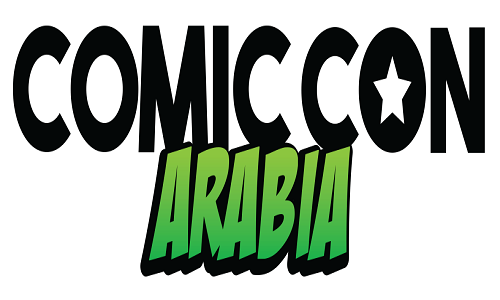 We’ve got some exciting news regarding Comic Con Arabia today. This will be the first Saudi convention featuring guests from America.  Riki Lecotey (known in the cosplay community as Riddle) will become the first American female cosplayer to be welcomed in Saudi Arabia. She will be joined by Carlos Blanchard (Rage Custom Creations, and widely recognized as Medieval Batman), Michael “Knightmage” Wilson (cosplayer, spokesmodel, and stunt man), and Thomas DePetrillo (owner of Extreme Costumes and self professed maker of giant robots).

Riddle’s journey will be particularly remarkable; appearing means she must adhere to Saudi laws as they pertain to women. Only women will be allowed to view her cosplay, which must be separated from the men’s area of the con. In public, she will wear an abaya. Adapting to the culture as a woman while also pioneering cosplay is frankly groundbreaking. Considering what future implications of merging these two cultures might mean inspires hope, and inspires an imaginative blend the likes of which we have not yet seen. 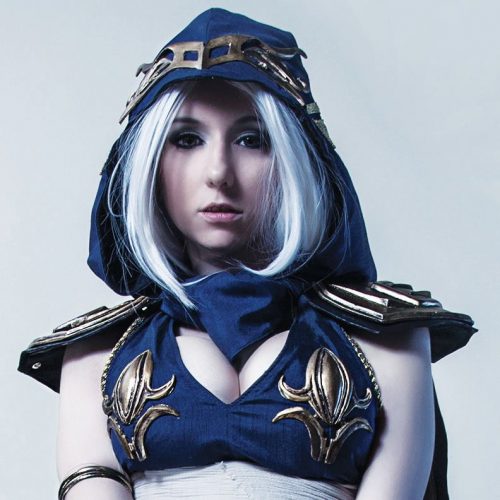 “This will be a historic event for the geek community in Saudi Arabia, and I’m excited and honored to be apart of It,”

“While comic & video game conventions have been happening for years all over the world, and it’s something many of us take for granted, this will be SA’s second convention ever, and first convention with international guests. A place for all geeks in Saudi Arabia to feel welcome and celebrate what they love.

Conventions and cosplay are still in its infancy in Saudi Arabia and everyone involved over the next few years, from organizers, attendees and especially cosplayers, are pioneers.

It’s inspiring on so many levels.

The fact that I have been selected to represent women in cosplay means more then I can express. I have seen how much cosplay has changed in my almost 2 decades of cosplaying. What always amazes me is how cosplay changes people. It creates community and confidence. Helps those who are shy come out of their shell, or those with a love to create, an outlet to do so.

I hope to share my knowledge with the cosplayers in Saudi Arabia , and encourage others to start cosplaying. I have benefited so much from my friends who have passed along their skill, I will always try to help those just starting out in this amazing hobby.

I’m excited to see how cosplay and the cosplay community will continue to grow in their counrty, especially now that they will have local events to show off their talent and love of the characters. I always look forward to seeing the costumes and picking up some artwork from local Saudi artist, but most of all, I look forward to meeting the geek community in Saudi Arabia, because no matter where you go in the world the geek community are my people. I can honestly say that when I’m cosplaying the old Sophie from spirited away or granny goodness,

I will always look back on my invitation Saudi Arabia as high point in my cosplay adventures.”

Blanchard (who was among the first American cosplayers during China’s first convention in 2015) also issued this statement:

“I am honored to announce that Riddle, Knightmage, Thomas DePetrillo and I will be cosplay guests at Comic Con Arabia at the end of this month!

Saudi is in the midst of going through some spectacular and historic cultural changes at the moment and we have been invited as the very first American cosplay guests at the first ever Comic Con in the capital of Riyadh. To say that we are honored and excited, does little to adequately express how we feel. This is a huge deal to put it bluntly.

Saudi Arabia only had their inaugural Comic Con back in February of this year, in the city of Jeddah, and it was a huge success with over 20K attendees.

Think about that for a second, and let that sink in.

What we have been attending for so many years has only just come to their country, showing us on a different level that we share common interests. And that our love for comics and costuming transcends cultures, race and religions. That regardless of all the differences between us, there is a commonality, albeit it a geeky one.

We have been given a unique opportunity to see first hand how cosplay and comics are viewed in their country, and we get to experience their joy of this, and allow us to share ourselves with them in the process. This is something we take very seriously, because we understand that we aren’t there as individuals, but as representatives, not only of the United States, but the cosplay community as a whole.

When they see us, they see you.

So rest assured that we will do everything in our power to make you proud of us. That when they interact with us, and let us share in their world, they see you, all the cosplayers, worldwide.”

How exciting to see such an ambassadorship within our geeky community. Geek Pride will bring you more news as this story develops. Keep an eye out for reports from the convention, which will take place November 24th-26th, and follow them on Twitter(@comicconarabia)

Until then, here’s a bit more about some of the guest 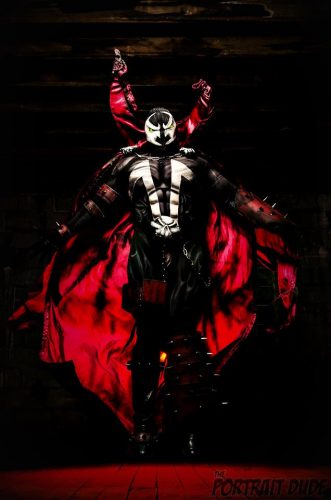 Michael “Knightmage” Wilson was born and raised in Cleveland, Ohio and now resides in Youngstown, Ohio.

A current decorated 17 year veteran Deputy Sheriff for the Mahoning County Sheriff’s Office in Ohio, Michael has been cosplaying since 2012 but the love for the comic and video game genre has been in his heart since he was little as it shows when he creates his costumes.  Having created over 100 costumes, many of his creations have been praised and displayed on numerous platforms in print and online, Michael is regarded as one of the most influential male cosplayers in the world.

Having a love for acting and stunt work, Michael has worked on several Hollywood comic book movie productions including The Avengers, The Dark Knight Rises, Captain America 2: Winter Soldier and more. Michael was also an alternate for the 2006 reality show “Who Wants To Be A Superhero” hosted by Stan Lee. Michael has worked on and has been featured in several fan films and productions such as “Flash Fall” by Together Brother Productions and the popular YouTube series “MAN AT ARMS: Reforged”.  Michael has also created costumes for various World Wrestling Entertainment superstars.

Michael is a spokes model for the independent comic companies “Shot In The Dark Comics” and “Transgenesis Comics”, having his likeness used for upcoming comic book characters.

Genuinely loving to entertain, make a positive impact and bring smiles, Michael most often uses his costuming by participating in many charitable events, benefAits, parades, birthdays and hospital visits to children. This has led him to becoming a member of esteemed costuming groups such as “The League of Heroes, The Heroes Alliance-Ohio Branch, East Coast Avengers, Costumers with a Cause and Superheroes to Kids in Ohio and Heroic Inner Kids”. Michael often works closely with local and national charity organizations as a sponsor, such as The Make-A-Wish Foundation, Capes 4 Heroes, Putting Downs First , Angels for Animals and many others. Michael has received numerous awards for his charitable deeds including the “’Outstanding Service Award” from Credit Where Credit Is Due and most notably the “Presidential Volunteers Award” from President Barack Obama and the White House. 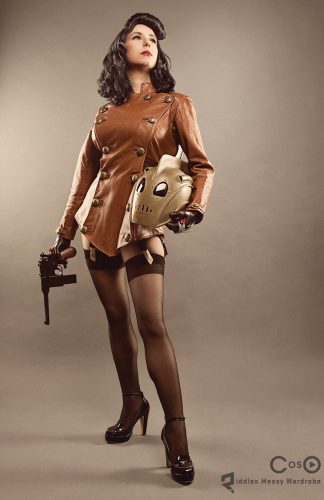 Riki Lecotey (known as Riddle) transplanted from her igloo in Canada and moved to the United States has been involved in costuming for over 15 years. She is internationally recognized and invited to conventions around the world, to judge costume contests, host workshops, and promotes confidence in cosplay

She has been interviewed by Playboy, NPR, Washington Post, been on one of the best selling Marvel Cosplay comic variant cover as well as featured on the covered of two of the most well-known cosplay magazines in the word, Cosplay Culture & Cohaku. She is currently releasing patterns through Simplicity and All the skills she has learned through cosplay also has gotten the opportunity to now work on a Superhero films

She was a main cast member on both season of Heroes of Cosplay, winning the most awards during her time on there. Riki also has appeared in two award-winning documentaries, 4 days at Dragoncon & Cosplay: Crafting a secret identity.

She is the creator and currently runs Cosplay for a Cause, whose raised over $50,000 for various charities worldwide (Red Cross & wildlife conservation society) by involving her cosplayers peers all over the world to be part of various projects.

Her favorite act of charity, however, is rescuing and rehabilitating baby squirrels. 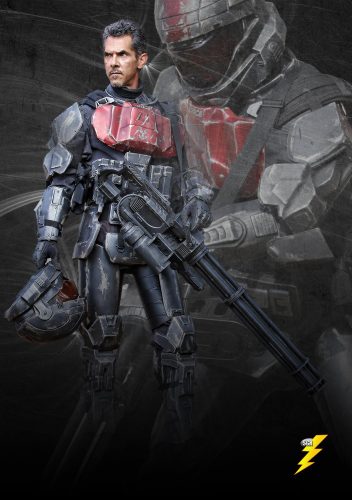 Carlos Blanchard with his company Rage Custom Creations makes the highest quality custom props, costumes, and graphic design products. Hailing from the United States, Blanchard has made a name for himself in the Cosplay community as a dedicated costumer, costume designer and graphic artist. He’s known especially for his work on the Medieval Batman and Facehugger Corset, two costumes that earned him and his company the respect of international Cosplayers. Carlos is also known as the creative talent behind the super viral, and now infamous Venom photo shoot that took costume photography and costuming to an entirely new level.