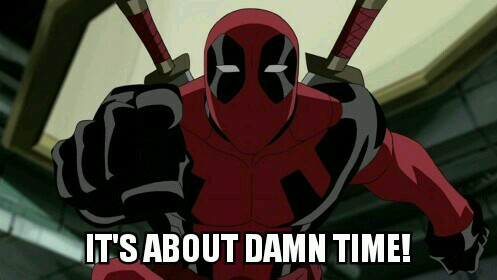 When the official test footage made by Tim Miller was leaked a few months ago, the internet went mental… and rightly so. The general consensus was “Why is this movie not in production?!”, but then we were asking 20th Century Fox, who aren’t exactly renowned for their good decision making.

Thankfully this isn’t just a “we’re looking into it” kind of decision – Fox have actually provided a date, which will be February 12, 2016. This places it a couple of months before Fox’s other major release that year – X-Men: Apocalypse, and it’ll be the first time they’ve taken on two Marvel releases in the same year.

Tim Miller is already signed on to direct, though Ryan Reynolds doesn’t have a deal in place though I (and probably the rest of fandom) would be incredibly surprised, and probably quite pissed off if he doesn’t get the role. At the moment we’re assuming it’s just working out the scheduling that may be delaying the official announcement of his involvement.

Fabian Nicieza (Writer & co-creator) said he’d had what he’d describe as “an interesting Deadpool day for me already” on twitter. Nicieza told Newsarama, “If the movie happens with the creative people previously attached as a part of it, I think it will be a very enjoyable ride!”

Fox also moved the release date for the Fantastic Four to August 2015… we did wonder if the leaked Dr Doom photos we posted had something to do with it, but it looks like they’re just filling the void left by the Assassin’s Creed movie.

Needless to say, I’m very very chuffed that the Merc With A Mouth is finally going to get the big screen treatment he so rightly demands.