Spearhead from Space is the first adventure with the Third Doctor, played by Jon Pertwee and is the first classic Doctor Who story to be given an HD release. Sadly, this is the only one we are likely to see on Blu-ray as the others were not shot on film as this was and are, apparently, not possible to upgrade with current technology. First aired in 1970, this story remains a stand-out classic.

Not only is it the first to be upgraded to HD, Spearhead From Space also features a number of other firsts. Here are some of them: 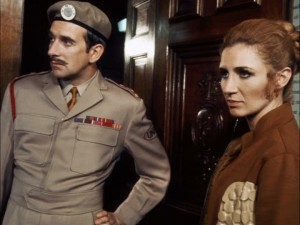 The story starts with the newly generated Doctor being exiled to Earth in a dysfunctional Tardis, accompanied by a shower of meteorites. UNIT investigate both the Doctor and the meteorites, realising that there could be a connection between them. Brigadier Lethbridge-Stewart – sometimes referred to as “The Brig”, who has met The Doctor before, is not convinced that the man who arrived in the Tardis is really him, due to his latest regeneration/new face. Of course, The Doctor soon proves himself to be the timelord as he helps UNIT get to the bottom of the mystery of the meteorites. 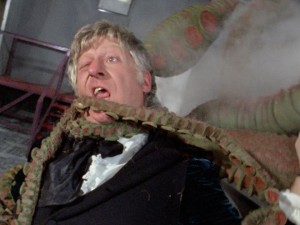 Enter the Autons; artificial life forms, resembling mannequins, who are controlled by the Nestene Consciousness,  a disembodied life force which can inhabit plastic. It is assisted by a mysterious man, called Channing, who uses a doll factory to aid the Nestene, building an army of Autons. They also replace people of importance with plastic imposters to aid their schemes.

It seems that Doctor Who has always had a knack of being able to make us fear things, which we may not have feared before. The mannequins are pretty scary; more-so when they reveal a gun within their hands and start terrorising the streets of  London. This is one of the most iconic scenes in Doctor Who history and while the story is fairly slow in it’s progression, it’s worth waiting for this invasion scene. Although not a common DW enemy, the Autons were so popular, that they were used to launch the reboot of the series in 2005, in the episode “Rose.” The shopping centre invasion scene was also recreated. I think that the Autons are a great enemy; both mute and menacing at the same time, they are quite reminiscent of zombies – and who doesn’t love those? 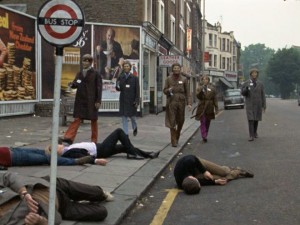 I’ve seen this story on a variety of  formats and it’s always been one of my favourites. It’s got so many things which draw me to it – The Autons, The Brig and of course, Jon Pertwee. He may have been The Doctor before my time but I watched re-runs featuring him when I was young as I knew him from other shows I watched as a kid, such as the excellent Wurzel Gummidge. He was such a great Doctor, very charismatic and although he could often be quite serious, there was always a sense of fun about him. His quirky dress sense helped out with that; a combination of frilled shirts, suits,  riding boots and even cloaks. His Doctor was often been described as a “dandy” or a bond-like character but I think he had his own unique style. 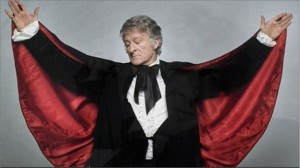 The picture looks great considering it’s age. If you watch the restoration comparison special feature, you’ll see just how much it’s been cleaned up. There is still some inevitable film grain but it’s fairly light; grain is usually much more apparent on  HD content than on SD due to the resolution, so this is not bad at all. Of course, being in HD, a lot more detail can be seen, one example being; you can see how sweaty some of the actors were – whether you want to or not. The only thing. which disappointed me,was that it was still 4:3 only; there may have been a technical reason for this, but I was surprised it hadn’t been given the widescreen treatment as several of the other classics have in recent years, but especially as this is an HD release.

There aren’t as many Special Features on this disc as most of the classics have. However, it does contain two interesting documentaries, which pay tribute to both John Pertwee and Caroline John; the restoration comparison is pretty amazing too. I also was  hoping for a Making Of /Behind the Scenes doco or audio commentary, which are quite common on the classic stories; as I mentioned before, this story boasts many firsts, so I’m sure there are many interesting stories behind it. This may be due to a lack of surviving cast and crew members, so it probably wasn’t possible.

This is essential viewing for any whovian; if you have only seen the modern series but want to check out some of the classics, then this is a great one to start with. If you already own the DVD version, it’s still worth getting the Blu-Ray just to see how good it can look and to watch the Pertwee doco of course.

I'm a 35 year old, self-confessed media junkie from London. I currently work as a tester in digital media (some say I get paid to watch telly) and also worked as a games tester in the past. I also spend a lot of my spare time watching films and playing video games. Thankfully I have a very understanding wife, who allows me time to do so.
More Goodness
AutonsbreakingClassic Doctor Who