Many readers here will remember the 1995 Judge Dredd film starring Sylvester Stallone which was, for lack of a better word, terrible. Those who do remember will be reassured to find out that Dredd 3D is a superior film in virtually every way, and for those who have never heard of Dredd before, it is a fantastically immersive and gory introduction to one of comic book’s most hard-line and uncompromising heroes.

Dredd 3D is set in a post-apocalyptic dystopian city called Mega City One; a huge, sprawling metropolis built on the ruins of Manhattan. With drugs, gangs and crime all rampant, society is not exactly living the American dream. To combat the staggeringly high crime rate, a radical new police force has been created. Combining the powers of Police, Judge, Jury and Executioner, the Judges have the power to summarily sentence – even execute – lawbreakers on the spot. Dredd 3D follows the most infamous Judge of them all, Judge Dredd, and rookie Judge and psychic, Judge Anderson. 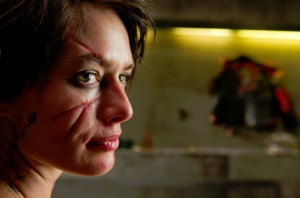 The plot is fairly linear. Dredd and Anderson are sent to investigate a triple homicide in one of the city’s towering 200 storey city blocks – small towns in themselves – and they soon get trapped within the block by Ma-Ma (Lena Headey), an ex prostitute turned gang leader (whom fantasy fans may recognise as Cersei from Game of Thrones). The routine investigation quickly turns into a fight to survive, as Ma-Ma throws everything she has at the two Judges. Comparisons have been made to another recent release, The Raid, however these comparisons are pointless. They may both be set in tower blocks, but that is where the similarities end.

The film is very well directed, and fans of the 2000AD comics will be relieved that unlike its predecessor, this film stays very close to its source material. Expect no Marvel or DC superheroes here; Dredd has no neuroses, no love interest and certainly no desire to conceal his identity. Just as in the Comics, we never see Dredd’s face; he is supposed to be a faceless, uncompromising and emotionless embodiment of The Law, completely unforgiving, and in this sense Karl Urban delivers an excellent performance. He does a great job portraying that amoral enforcer of The Law we know him best for. That isn’t to say that the film lacks emotion or characterisation, however. This comes through very strongly in Judge Anderson (Olivia Thirlby). A rookie that failed her aptitude tests, she would not even be a judge but for her vast psychic powers, and again, Olivia does a great job of portraying a character that is determined, and knows she has everything to prove. And she does, as during the course of the film, Dredd is not only her partner, but her assessor. An interesting sub-plot, which helps bring a small sense of characterisation to the usual stonewalled character, as he assumes a mentor role. All in all, both main characters complement each other well.

The setting of Mega City One does differ to the comics. Instead of the endless horizon of huge “starscrapers” any Judge Dredd fan might be used to seeing, the whole look of the film is much more contemporary, almost bordering on present-day, if it wasn’t for the huge, gargantuan tower blocks, interspersed among the more regular skyscrapers. However, this isn’t necessarily a bad thing, as it gives the whole film a realistic look to it, as if this dystopian future is one that might actually come about, similar to District 9. Not an entirely coincidental comparison, as the city shots use Cape Town and Johannesburg with generous helpings of CGI, the same cities used in the aforementioned film. 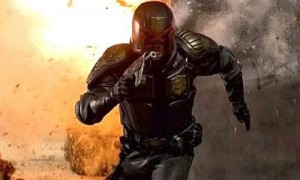 The special effects in the film are very well used. The city is being flooded with a new drug nicknamed Slo-Mo. It gives the user the feeling that time is passing at 1% of its normal rate, and naturally this gives the director ample opportunity to use some very effective special effects techniques, as bullets whip into henchmen and their body fat slowly distorts and ripples, while others get thrown off the 200 storey tower block, and fall slowly to their death. It would have been easy to go overboard with these effects, but the director uses them tastefully, and in moderation. There are just enough slow motion scenes to be impressed by the special effects, but they are well spaced, and one never feels overwhelmed. It is clear this is a film meant to be watched in 3D, and although I personally dislike 3D films, as the trade-off between a darker screen and the effect of the 3D is usually not good enough for me, I was nonetheless impressed with the way the scenes were shot, and I count it one of the few films that I would pay extra to watch in 3D.

It would be easy to see why, after the 1995 film, directors would want to stay away from this particular area, but it has proved to be a very impressive adaptation of one of Britain’s most well known comic books. This is an impressive undertaking, and not just because it sticks to the true essence of 2000AD. A well-written script, on top of a well directed and excellent performance from Karl Urban as the eponymous Judge, makes Dredd 3D finally the film that the comic books deserve.

Matt, 24 last time he checked, was born and raised in Manchester. A self-styled geek; when he isn't annoying his other half by fitting in as much gaming time as he possibly can, he can be found getting his fix of Fantasy and Sci-Fi elsewhere by reading, writing, or watching TV Series and Films. He is also a Michelin 3-Starred Chef in his spare time, and can be found experimenting in the kitchen, and generally poisoning his friends with obscure and mysterious dishes.
More Goodness
3dbreakingComicbook