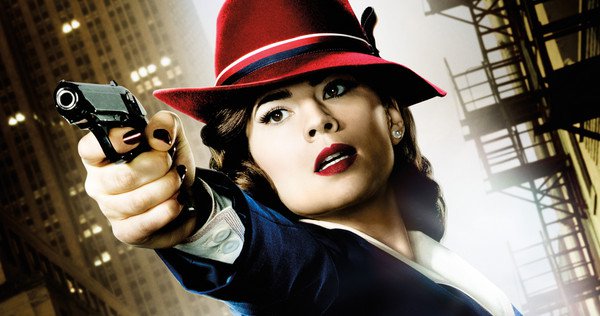 And so the moment has come. Agent Elizabeth “Peggy” Carter, the woman that didn’t just teach the Nazis not to underestimate a woman, but the Americans, her fellow Brits and the Soviets has been done in – By the network execs, of course. I’ll admit it, Agent Carter has probably been my favourite of the Marvel TV shows so far (And I include the Netflix shows, though I do rather like Daredevil and Jessica Jones), and not JUST because of Jarvis (and his wife). 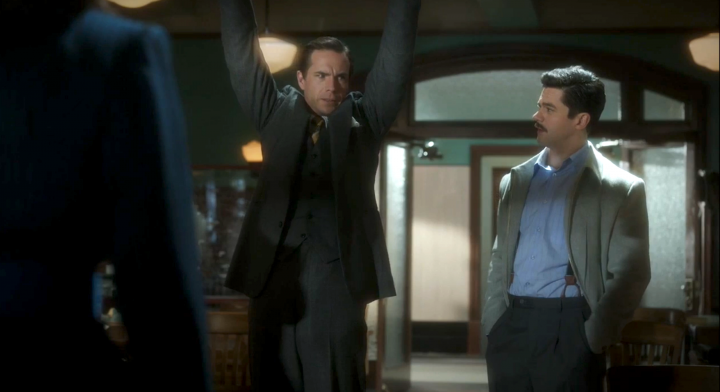 It was entertaining, loved to make a nod and a wink to the mythos and the future, held a VERY harsh mirror to the attitudes of the 40s and 50s we tend to view with rose-coloured glasses, and yet almost every one of the characters had something vaguely redeeming, or at least sympathetic about them, whether good or bad. They played it to perfection with it’s short seasons, and it made a fabulous change of pace from the often uneven Agents of SHIELD. I understand that the second season wasn’t as successful as the first. It was a lot less pithy (despite being in Hollywood), and yet, if anything, even better for the fact that it kept the best of the first season, added in some extras that improved it, and tortured us with a range of “will they won’t they” plot lines that I thoroughly enjoyed. 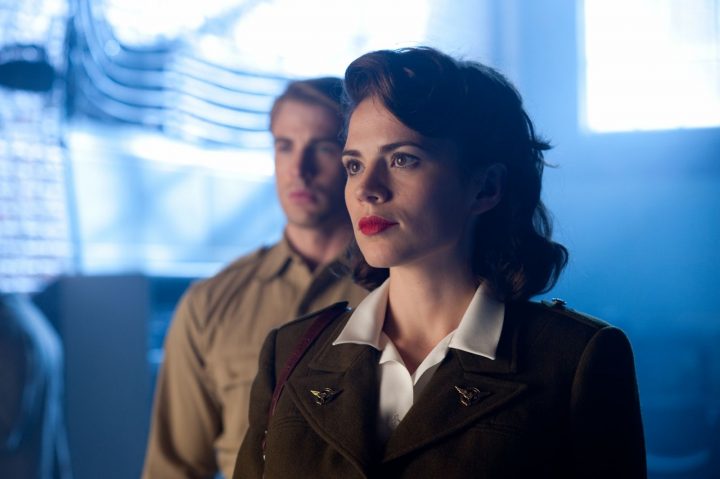 Season 1 brought us Peggy herself, fresh from kicking ass in Captain America, and plunged her into the cold and unforgiving light of ‘civilian life’ of a sort after the war. No-one knew what to do with her, so they treated her like a secretary, even though she’d achieved so much in the war, but she never ever let that stop her from doing what she knew had to be done. And then Howard Stark, in his somewhat carefree and slightly disheveled manner, blew back into her life, because he knew that he could trust her to not just save Howard’s reputation, but save the world from his “Bad Babies”. He may have popped in and out, but he left her in the capable hands of Mr Jarvis – A not-so-straight man to Peggy’s competence and determination. Superbly capable, if somewhat flappable, neither he nor Peggy were caricature enough to offend English people, but still charmed the pants of the Americans (and the rest of us). Together they achieved plenty, and saved Howard, though it wasn’t a free win. Peggy’s fellow agents had their moments, especially poor Souza. and her fiends and housemates in the rooming house (with it’s formidable guardian) helped us to see further how.. strange the 50s were for women to our modern eyes – Agent Carter didn’t exactly judge the way women were treated in the aftermath of the war exactly, but it refused to let us pretend we didn’t see it.

The second season might have moved on in time, but also in space, hopping from New York to Los Angeles. Losing a couple of the cast, it kept the best, and added a couple more. Best of all, though, was the inimitable Mrs Ana Jarvis. To my mind the best thing about the whole season, after only being hinted at or mentioned in the 1st season. With Hollywood and the end of the war we now had the Red Menace to deal with – Meaning we got to keep the wonderfully broken, yet deadly Dotty – It would really be interesting to put her and Natasha Romanov in a room – Assuming you chose the colour carefully. She challenges Peggy to examine her motivations and experience, because Peggy can’t help but feel strangely responsible for her. Dotty was trained from birth to be deadly, and to hide in plain sight, and yet the way she was raised and trained by the Red Room means she can’t really connect with ‘normal’ people – Peggy’s the only one that can really understand her, and yet they’re totally at odds with one another over and over. 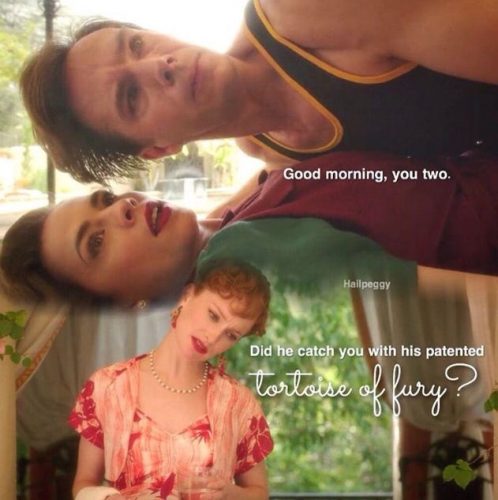 Seeing Peggy and Daniel and Souza trying to move on from one another was a little painful at times, often awkward. Seeing Souza interacting with Jason Wilkes as he and Peggy tried to figure out what they wanted was even more so – Mostly in a good way. Again, Agent Carter showed us starkly how women were treated after the war, but it also used Dr Wilkes – A highly intelligent and qualified scientist and engineer with combat experience, yet he still had to fight for a decent job because of the colour of his skin. Of course he and Peggy saw something in each other from shared experience. 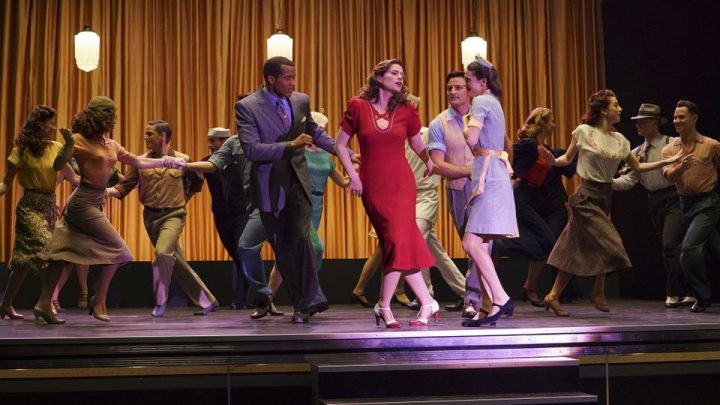 Jack Thomson had a strange journey – A veteran, with all the right contacts, he seemed to have it made, but he had plenty to hide, and lots to prove. Always abrasive, if capable, he was often his own worst enemy. Annoying and frustrating, you still felt, by the end of season 2 his main flaw was in picking the wrong people to try and impress (and trust). In the end he redeemed himself, but not without doing it his own way, as always. You couldn’t help but want Peggy to slap him about a bit to get rid of his smile. And then there’s the tragically flawed and doomed Whitney Frost, Intelligent, beautiful, and pretty cracked even before the events of Season 2. Hiding behind her husband who started off loving her and using her to succeed, and ended up fearing and betraying her, that final betrayal tipped her over the edge, and still couldn’t help feeling sorry for her. 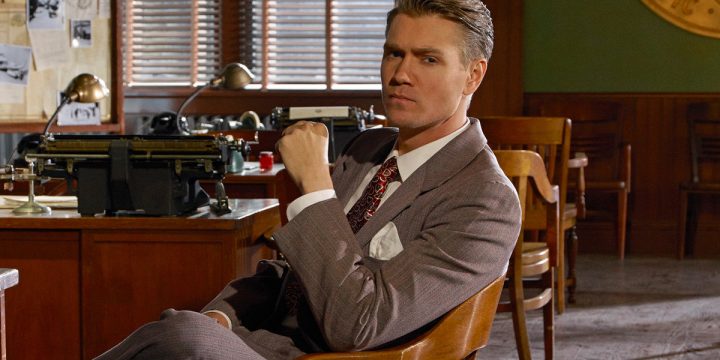 Ultimately, we know what Peggy achieved in the end, through the rest of the Marvel TV/movie universe. and we had some tantalising glimpses of what might have come next (More Howling Commandos? The Winter Soldier?), along with some of the things we might have hoped for (Young Nick Fury and Phil Coulson in training????). 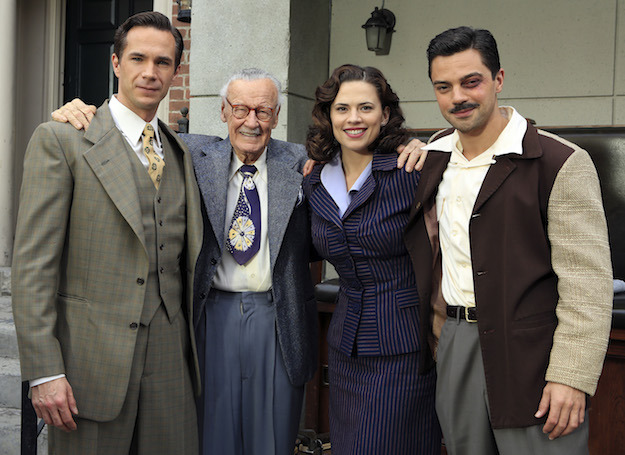 We learnt why Peggy fought. We watched her meet Steve Rogers, then Captain America. We saw her fall in love with Steve, and lose him, and how shoddily she was treated by the world she fought so hard for. In her own way, she redeemed Tony Stark’s father – No matter how cavalier and irresponsible he seemed (like father like son?), he never stopped believing in, trusting and relying on Peggy. We watched Peggy fall in love, out of love and, I daresay, meet her future husband. Then we saw her meet Steve again, after so long, and we met her niece. there’s so much more we could see, if they would show us.

Maybe Netflix is looking for somewhere to park some of that $5 billion they wanted to spend on original programming? Let’s see what they could do with her, if they could get the cast back together.

Because it really worked because of the actors, who made the characters (with a little help from the writers, directors, crew etc). I don’t think I can picture anyone but Hayley Atwell as Peggy anymore – and I wouldn’t want to get in her way if she remembers half the moves she learnt for the part. Dominic Cooper continued alternately Charming and frustrating us as Howard Stark – Just crazy enough to believe he was that smart as well. James d’Arcy made such a loveable, likeable Jarvis – What a wingman, and in season 2, he had such wonderful chemistry with Lotte Verbeek as his wife, Ana. I’ll admit I may have shed a tear or two for Ana towards the eand of Season 2… her and Edwin both. 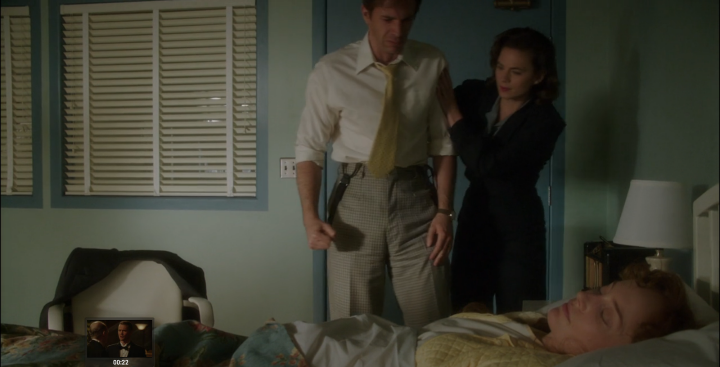 Bridget Reagan made Dotty Underwood scary as hell, but oddly sympathetic – You could see how she was broken, but also how she had the seeds of her own rescue if she chose to nurture them – But she had no idea how! Enver Gjokaj as Daniel Souza was sympathetic, likeable, but tough and reliable. He only ever really had eyes for one woman – I’m glad she finally realised, as you can only really keep that sorta thing going for so long. Lesley Boone as Rose was awesome, going from occasional speaking part in season 1 to full time ass-kicker in season 2. And with seasoned pros like Ray Wise, Neal McDonough (Go Dumdum!) and Kurtwood Smith supporting them, we got to have a lot of fun. 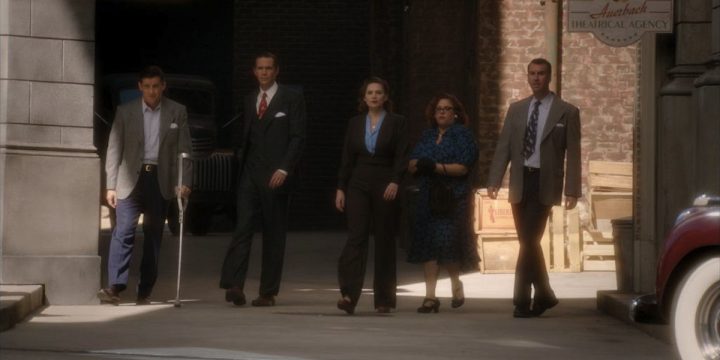 Peggy Carter taught me the same lesson Firefly did. And Chuck. And Babylon 5, too. Great writing helps. But a great cast, that are great together, not just individually? That’s the goldmine, that’s where you truly learn to love characters. And the off screen chemistry of the stars was fabulous too – Even with other Marvel stars (<cough> dubsmash <cough>)! 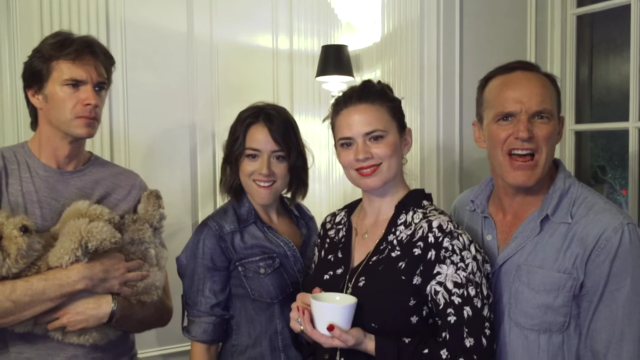 I’ll miss you Peggy Carter, and I’m hoping we’ll see you again, in more than just a flashback! I know Hayley Atwell took a job as lead on another series, but I can’t help but think it came down to her jumping cos she saw nothing else coming for Peggy – and that makes me sad. My Januaries will be immeasurably darker without Peggy to look forward to!

I'm just this geek, you know? Love comics, though not a regular reader - Love gaming, PC, board games and wargaming, and reading Sci Fi. Chairman at my local wargaming club, I play X-Wing and occasionally 40k (But mostly X-Wing!) By day I work in eCommerce, by night I'm either still working, reading, watching or writing :)
More Goodness
Agent CarterCaptain AmericaHoward Stark