previous
Sonic The Hedgehog Review : Family Fun Speeds in for a Win!
random
next
REVIEW : Back to the Future - The Musical
Film and TV
2 likes

So we just got a news blast from our friends at Hasbro and it looks like we have some very cool Mandalorian, and more specific, “the Child” related toys / collectables incoming! Seriously the Animatronic Baby Yoda…. its all about the Animatronicbaby Yoda!

For all the cool and allllll the cute, check out the press release and photos below!

From HASBRO’S STAR WARS Collection comes THE CHILD ANIMATRONIC EDITION toy with sounds and motorized sequences! He may look like “BABY YODA,” but this lovable creature is called THE CHILD – and now you can become his protector with this animatronic toy from STAR WARS. Touching the top of THE CHILD’S head activates over 25 sound and motion combinations, including happy and excited sounds, giggles, babbles, and more, all while the toy’s head moves up and down, ears move back and forth, and eyes open and close. Boys and girls can pretend to harness the power of the Force as THE CHILD toy closes its eyes, raises its arm, and sighs as if exerting a great amount of energy. Lay THE CHILD toy down and it will close its eyes and take a “Force nap.” Includes figure and Mandalorian pendant. Requires 2 AAA batteries, included.

From HASBRO, the STAR WARS THE CHILD 7.5-INCH TALKING PLUSH with character sounds and accessories! Nothing in the galaxy is as cute, has taken as many naps, sipped more soup, or learned to control the Force as THE CHILD from the hit series The Mandalorian on Disney Plus! He may look like “Baby Yoda,” but this lovable creature is called The Child—and now you can become his protector with this cuddly plush toy from HASBRO Star Wars, dressed in the cutest little robe ever seen this side of Mos Eisley. Posable arms let kids pretend the Force is within their reach, while a squeeze of the toy’s soft plush body activates character sounds! Includes talking plush toy, bone broth bowl, and Sorgan frog. 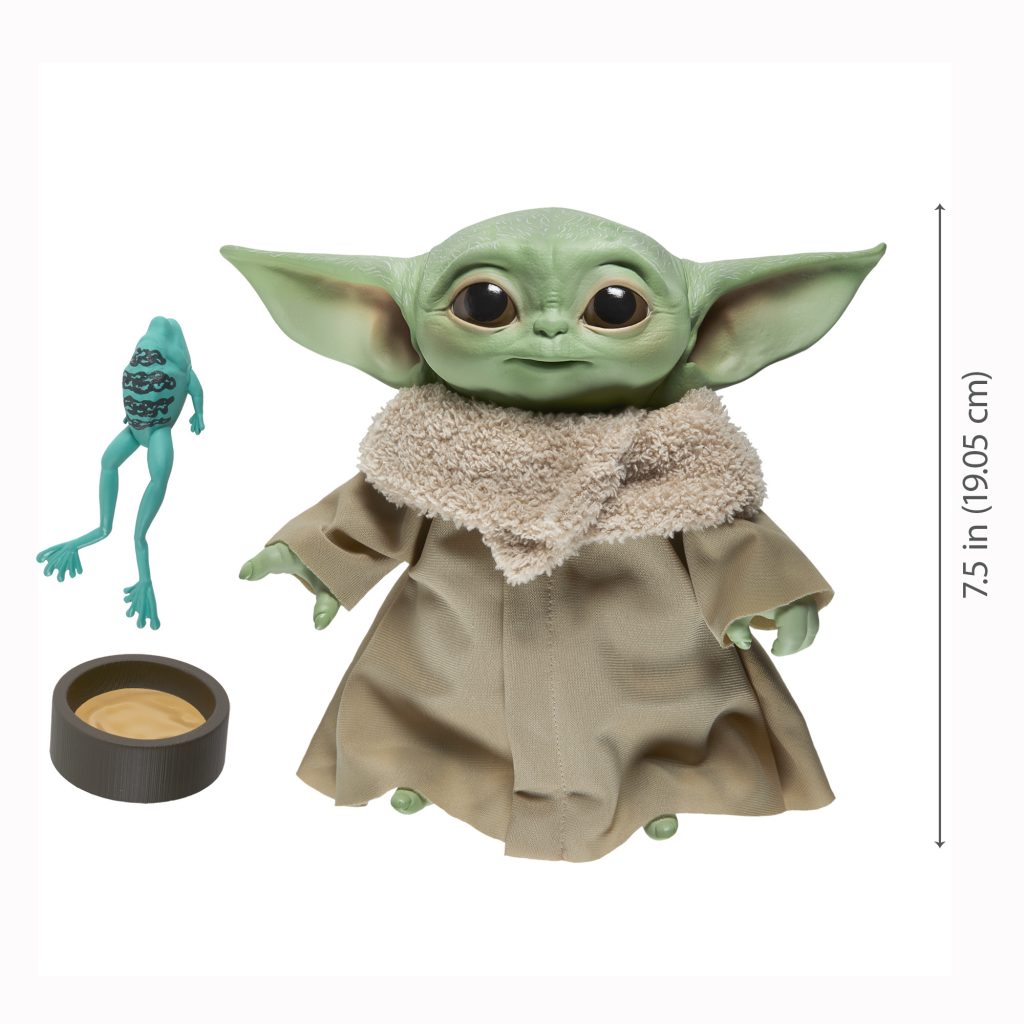 From HASBRO is the STAR WARS THE CHILD 6.5-inch figure inspired by the itty bitty bounty from the hit Disney Plus series The Mandalorian! THE CHILD is taking the world by storm, and now kids and fans can take one home! Add huge fun to any STAR WARScollection with this big STAR WARS THE CHILD 6.5-INCH Figure. Imagine every bounty hunter in the galaxy is chasing The Child (because, let’s face it, they are) and protect this adorable creature from them all! Featuring design inspired by the live-action series and several points of articulation for big posable fun, kids and fans of all ages will love imagining favorite moments from the STAR WARS galaxy! Available at most major retailers. 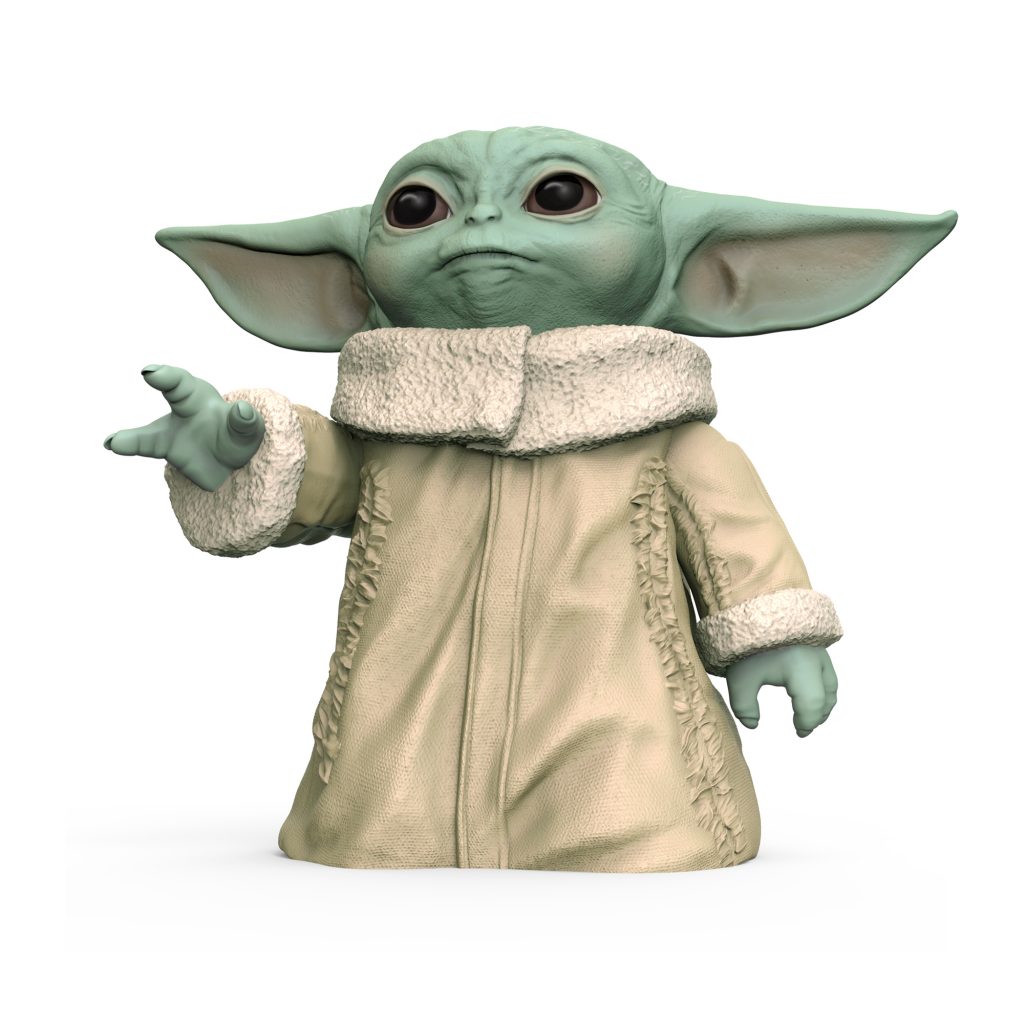 From HASBRO is the STAR WARS THE BOUNTY COLLECTION, THE CHILD 2.2-INCH Collectible figures, inspired by the super-cute character from the hit Disney Plus series The Mandalorian! He may look like a “Baby Yoda,” but this 50-year-old adorable creature is called The Child and is many things: cute, curious, hungry, sleepy, Force-sensitive, and one of the galaxy’s most wanted! Fans can start their own collection of this adorable character in poses inspired by iconic scenes from the live-action series! With 6 figures to choose from, kids and fans can collect figures featuring fun poses such as sipping soup and blanket wrapped, hold me and ball toy, and froggy snack and force moment. These 2.25-inch collectible figures are an awesome way to start a collection, swap with friends, give as gifts, or display in any STAR WARS collection! These items will be offered as 2 packs. Available at Amazon 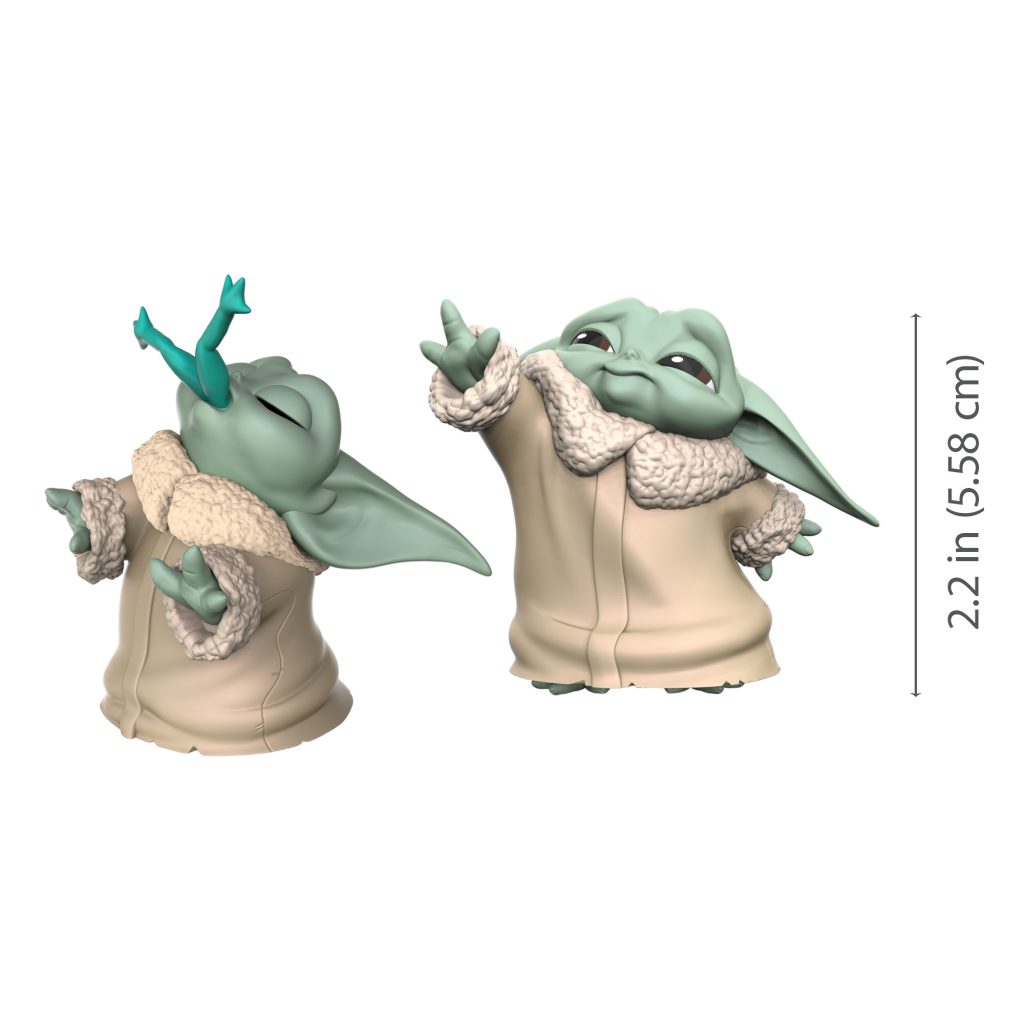 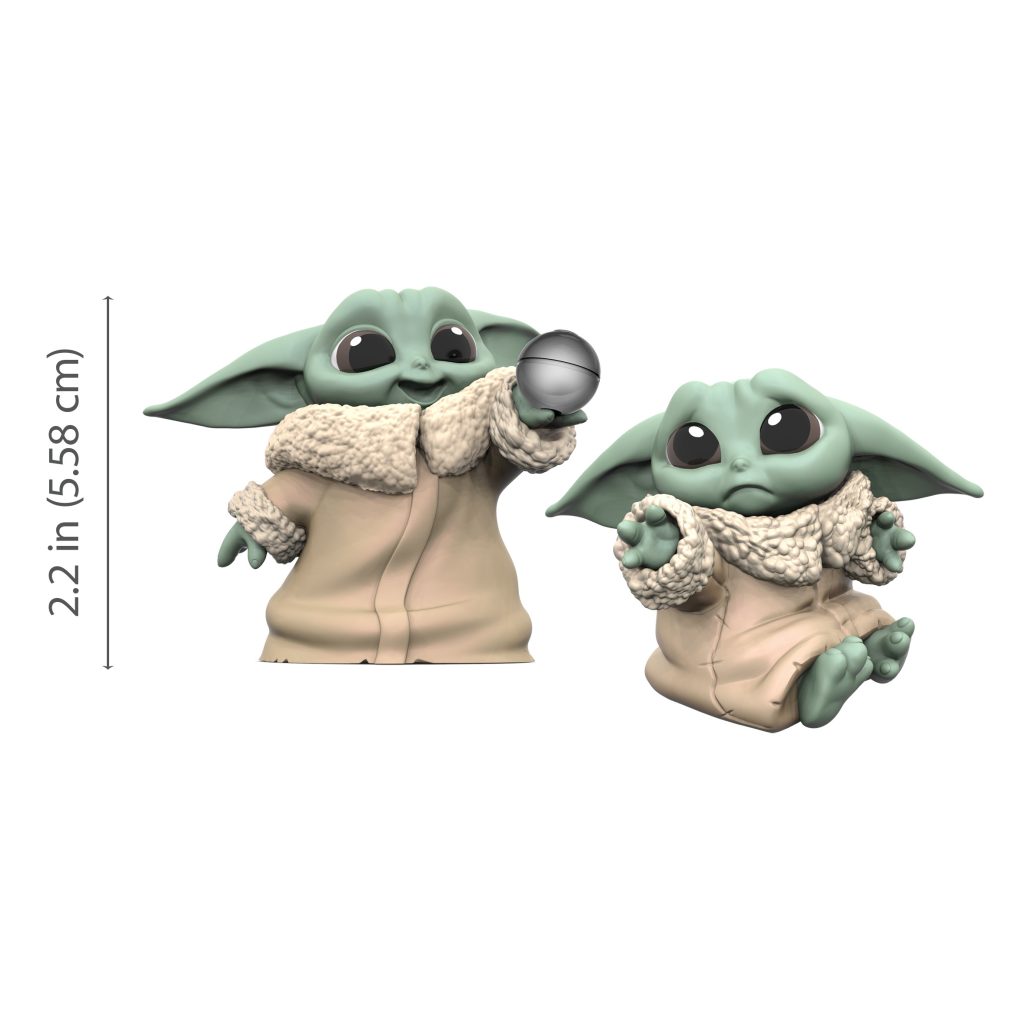 From STAR WARS: THE BLACK SERIES is THE CHILD 1.12-inch collectible action figure based on the so-cute-it-hurts character from the Disney Plus hit series The Mandalorian! THE CHILD is the most adorable mystery from here to the Outer Rim! Now fans can add the pint-sized galactic sensation to their STAR WARS: THE BLACK SERIES collections! The 1.12-inch figure is styled to look like The Child, with premium detail and multiple points of articulation. Includes figure, bone broth bowl, toy knob and Sorgan frog. Available at most major retailers. 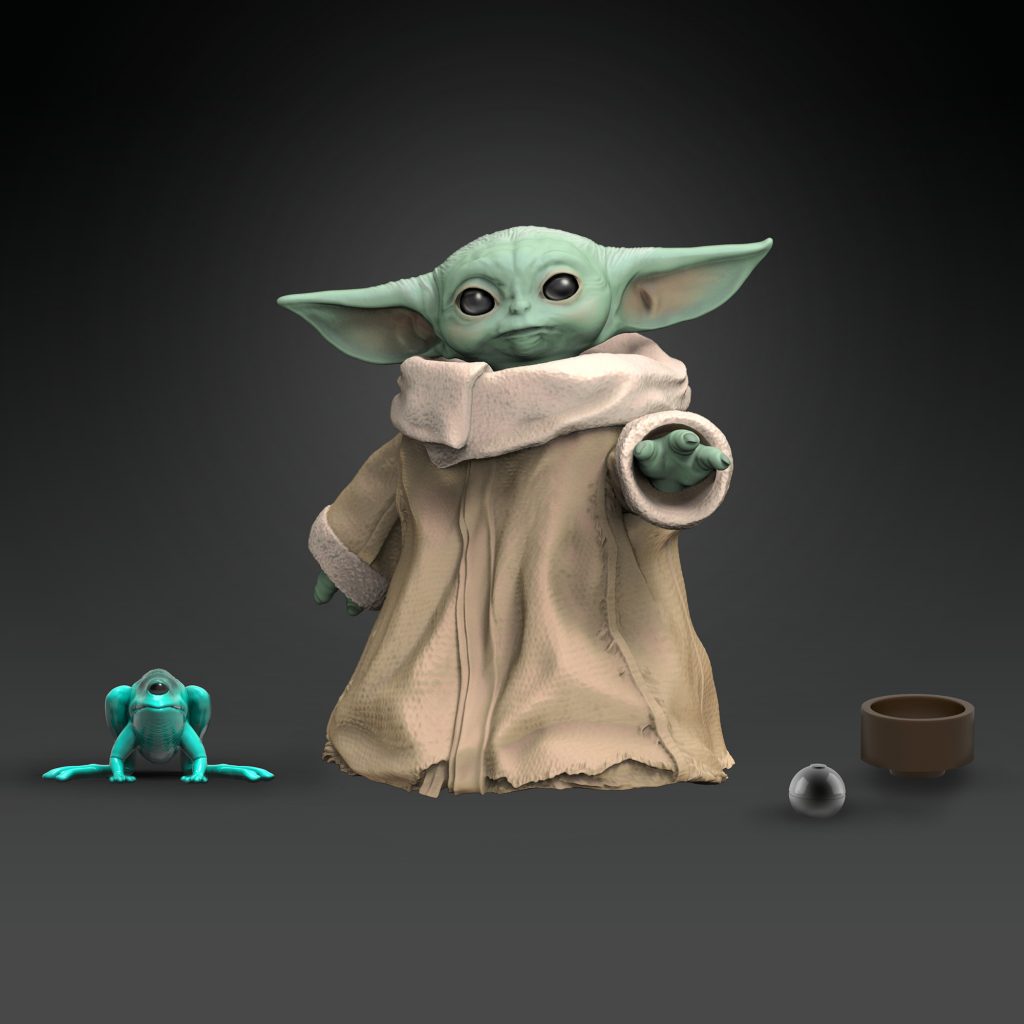 The IMPERIAL TROOP TRANSPORT was used to move the Empire’s soldiers from location to location. This STAR WARS: THE VINTAGE COLLECTION IMPERIAL TROOP TRANSPORT vehicle is inspired by the vehicles seen in THE MANDALORIAN live-action TV series on Disney Plus. With realistic detail including a removable roof, opening doors, fold-down seating, swiveling turret, and blaster storage, this vehicle can be displayed in action figure and vehicle collections. 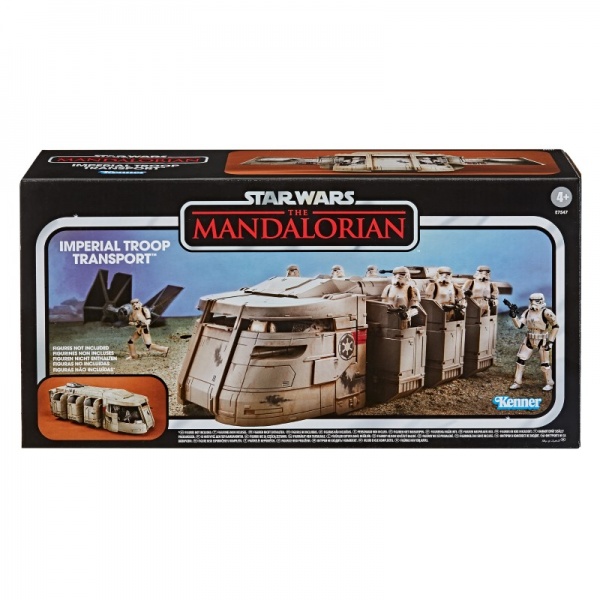 A Dungeons & Dragons Reboot? Or: “Roll a Will Save VS Bad Cinema.”