previous
Man of Steel: The arguments for
random
next
Hammer of the Gods -- 4 GPPs
Film and TV
0 likes 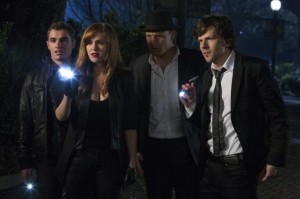 I had very low expectations of this movie, especially since I chose to go in to see it without reading anything about it beforehand. There was just something about it that made me wonder why I even spent money on the ticket. Five seconds into the movie I was glued to my seat, wondering why I had any doubts about it. It has Michael Caine and Morgan Freeman, for crying out loud!

But back to the topic at hand. The movie tells a convoluted story of magic, mystery and plots, keeping you constantly on the edge as you try to solve the puzzle, with little to no success. It seems like the writers have kept up with whatever the viewers might think and did the opposite, just to keep us all on our toes.

Four magicians, with marginally successful acts -some of them as street hustlers- are suddenly summoned by a mysterious man through tarot cards that supposedly represent each of them. One year later they are the most successful magic acts around, their actions seemingly done in order to showcase their magical abilities; but when they involve robbing a bank, and their own employer,, things get heated and the FBI gets involved. Now I don’t know about you, but I love magic. I love believing that what Dynamo is doing is real and not some trick and I loved believing that  the characters were more than shams, who happened to be great at tricking people. Like everyone else, I know magic is nothing but misdirection, but this movie reminded me and I think the entire room that it’s also fun and it’s much more entertaining to look at it without trying to expose the trick.

What at first seemed like the tale of a robbery, the best the world has ever seen, turned out to have little to do with their desire to be stealing property, but it had a lot to do with a very important lesson: When you’re not good at something, don’t try to bring down those that are. No one likes that. For those of us unaccustomed to a lot of magic tricks there were little gems here and there that explained how the simplest of illusions are created, but for the most part the secrets revealed did nothing to dispel my love of magic. 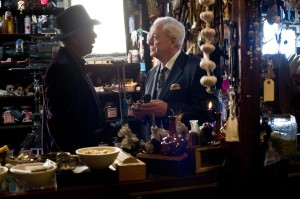 Each one of the actors was fantastically well chosen,  truthfully few people could portray obfuscating stupidity as well as Mark Ruffalo or play out arrogance with the relaxation of Michael Caine or Morgan Freeman. While they get less screen time than Jesse Eisenberg, Woody Harelson, Isla Fisher or Dave Franco (who is slightly neglected, despite being able to act) they have managed to steal every scene in which they happened to be present, reminding us all just what makes them two of the most beloved and talented actors in the world. Which is not to say the youngsters didn’t hold their own.

While the movie was fast paced and had a lot of fantastic special effects, it would’ve ended up as lame as many hit and miss movies that have graced our screens as of late if it were lacking the talented cast and dare I say it a writer that knows how to keep things from being predictable. If there was one thing I liked about this move it was that I was thwarted from all my attempts to figure out who did it. It was Agatha Christie with magic and flash paper.

Personally, I loved the great reveal at the end (which I’ll tell you nothing about, because you really have to see this movie in order to fully appreciate the information) as I loved the fact that there were no clear villains in this movie. Not in terms of laws, at least. The way we as humans look at the situation faulted, in our eyes, the people that surprisingly had justice on their side- or at least the loopholes in the legal system at their beck and call. The heroes of the story were innocent in our opinion because they were doing the right thing by the many that have been, more than once, cheated out of their goods. It’s probably what made the story so appealing, how many times have we wished for some superhero, without a cape, to show up and make things right in our lives? Now You See Me does just that, it gives us a defender of the average Joe, and despite their less than honourable reasons, it was hard not to root for them.

All in all? It was worth going through the scorching heat that melted the asphalt to see it and I would go again, just because it’s that good. Don’t miss it, it’s better to watch it on the big screen and, thankfully, it wasn’t in 3D so you won’t leave the place cross-eyed and sporting a headache. Or is that just me? Check out the trailer below and if you do see it, let us know what you thought about it.

What's there to say about me? I love the sci-fi and fantasy genre when I read, but I am in no way limited to that alone. I do think Frank Herbert deserves a statue for his writing(if there is one, point me in that direction, please). I enjoy writing quite a lot, but I am also kinda lazy. If you want to make me happy give me books or Doctor Who collectibles. Or a real TARDIS, in which case I will love you forever.
More Goodness
dave francojesse eisenbergmark ruffalo