previous
I, Frankenstein Trailer
random
next
It's Official: The Hateful Eight is Cancelled!
Film and TV
0 likes

It seems like 2014 is the year of the return to ancient times. The story of Pompeii, with a romantic twist, is being brought to life again, this time in a movie starring Kit Harrington, Carrie-Ann Moss, Emily Browning, Adewale Akinnuoye-Agbaje and Keifer Sutherland, to name but a few. 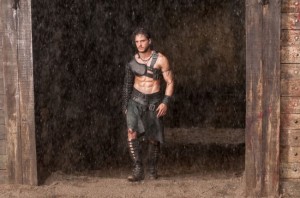 While the tale of the city covered in lava, following the eruption of the Vesuvius has been known for over a thousand years, we’re promised an epic tale that will blow us away. Milo (Kit Harrington), a slave that has become one of the best gladiators in the city must fight to find his loved one in a sea of ash and fire as the world as he knows it is shaken to the ground. The trailer looked impressive and it made me curious as to how exactly they plan to have the story play out. I cringe to think they might end up doing just your run of the mill romantic flick (which the poster and the trailer might suggest), despite having one of the world’s worst tragedy of its time to draw from. Only time will tell. The movie premieres on February the 21st in the USA, though by the looks of things most countries will have to wait until later in the spring to see it.

What's there to say about me? I love the sci-fi and fantasy genre when I read, but I am in no way limited to that alone. I do think Frank Herbert deserves a statue for his writing(if there is one, point me in that direction, please). I enjoy writing quite a lot, but I am also kinda lazy. If you want to make me happy give me books or Doctor Who collectibles. Or a real TARDIS, in which case I will love you forever.
More Goodness
adewale akinnuoye-agbajebreakingemily browning