previous
Keaton Speaks and Beetlejuice 2 Rumours hit Overdrive
random
next
Insomnia, Channel 4, the 90s and an introduction to anime
Film and TV
0 likes

Just yesterday toy manufacturing giant Hasbro hosted a teaser of a new line of toys in anticipation for the upcoming release of Captain America: The Winter Soldier (2014) amongst other lines. The movie is set to be released on March 26th of this year and due to the recent Superbowl extended trailer (and name of the film itself) fans of Captain America are expected to whiteness high-octane battles between the defrosted hero and his old friend and sidekick Bucky Barnes ( a.k.a The Winter Soldier).

This aside, if the new action figures are anything to go by we could maybe expect to see a return of the Captain’s nemesis. The freshly announced line includes, amongst others, Red Skull (pictured), meaning the character will more than likely feature in the upcoming film (no guarantees that his drone-firing jetpack [?] will appear though). 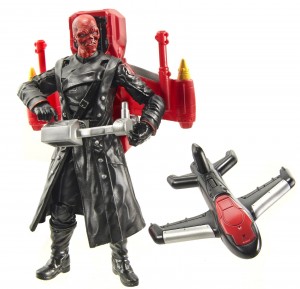 There are no guarantees of course that Red Skull will appear heavily or in fact at all as a villain in the film, perhaps just a coveted appearance in the end of credits scene we have come to expect of Marvel Studios? Either way the film looks set to not only top The First Avenger but keep up the momentum of the fantastic phase II Avengers films we have seen so far.