previous
It's the 'Captain America: The Civil War' Trailer We've all Been Waiting for...
random
next
In Devil We Trust: Final Daredevil Trailer
Film and TV
0 likes

Well chosen main cast - Morrissey is particularly strong
Overall mood of the piece conveys foreboding well
Pacing of scenes mostly helps to vary the mood where needed by the story to enhance the performance.

Occasionally heavy handed, telegraphs plot points ahead of time.
Pacing of film feels a little too brisk overall. There's a feeling that bits have been removed and the film pulled in around them to get from the set beginning and end.
Feels sometimes like they have cut a little too much from the script, including backstory for Kate and Justin - Just enough there to fulfill the needs of the story, but might have been richer with a little extra, and would give more weight to Poésy's performance

Running time 92 mins
A psychological thriller, dealing with birth, loss and the need for control. The tone is cold and clinical, but the performers do well with what they have. Could maybe have done with 1 less script change, slightly less editing and letting the performers delve into their characters a little more. Farr needs to balance leaving clues of problems with telling us what's coming too early - I'd have enjoyed finding out "What. where and how" a bit more, it feels like it's on railway tracks a little. 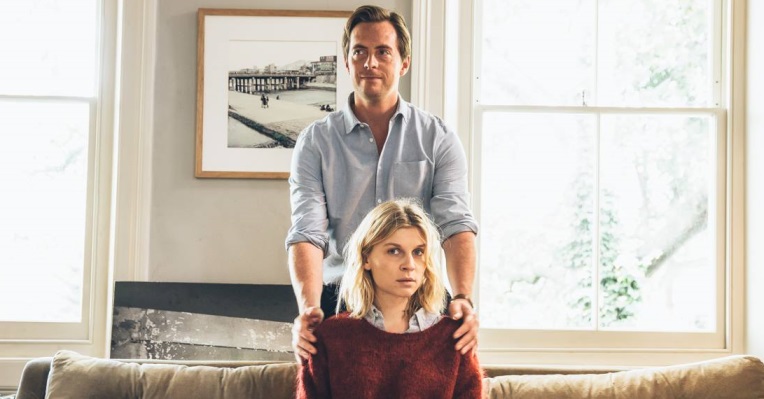 And with that surprisingly apt opening exchange, “The Ones Below” begins. Kate and Justin live in a converted Victorian Terrace in London, and Kate’s expecting their first child. They’re a little messy, in an ordinary way, and seem comfortable with where they’re going next. The flat downstairs is vacant after the old man living their passed away, but they get back from a hospital check to find movers there, stacking boxes without the owners. they don’t feel comfortable meeting them until Kate realises they’re expecting a child too, but getting to know them better may not be the right decision.

At first the 2 women get on really well. Kate is a successful career woman, deciding later on that she wants to try for a child, but her confidence in parenthood is damaged by her family. Teresa is young, optimistic about parenthood – Jon’s second wife, because his first wife couldn’t have children – And Jon always gets what he wants…

Teresa and Jon are shiny, well-polished and a little too cold and perfect. Yes, she’s German, and he’s a banker that worked in Germany before they moved to the UK, but there’s so much obvious control in their behaviour, that it’s almost a relief when something snaps and the cover blows off what’s really there, dreadful as that sounds.

The spiral that follows through the film hints at themes of loss, despair and a need for control,and where they need to be villainous, or tortured, scared or confused, the main cast do well, the side actors, including Kate’s mother, not so well.It’s obvious that Kate’s mother is supposed to come across as emotionally distant, but she often just seems a little lost, like she had an extra page of script that she’s waiting for them add into the shoot, but instead they’re all shouting at her or ignoring her.

As for the ending, it’s actually not a badly constructed film, but Farr ensures you can see most of it coming by the 30 or 40 minute mark. I want to like it more for the sheer amount of work they’ve put in, but it mostly acts as a bottle film, tied into the 2 flats and the downstairs garden. This means that the times at Justin’s work, the health club, etc, should help to open it up, but everything is lit so brightly and starkly it’s only the additional extras that really make it seem like a bigger flat.

While 2 of the characters suit the clean, bright, clinical lighting, a more nuanced tone in other parts of the film wight help it feel less detached. The tempers that flare up often pass too quickly on both sides, like everyone is a little embarrassed, apart from Morrissey, who enjoys the opportunity to chew on the scenery, but not too hard – It’s rented!

Overall, “The Ones Below” is a very cold film – As befits 2 of the 4 main characters. Most of the scenes are lit by Farr in a very cold, clinical way to enhance the overall mood of foreboding – This suits a lot of areas in the story, but can make it hard to feel attached to the characters which would make it all hit home harder. Not to say the performances are bad – I thought the 4 main stars do very well, and conveyed the emotions and motivations of their characters effectively, but the lighting and framing just washed things out.

The individual scenes are generally well paced and constructed, short at times and racing through emotionally charged moments, holding you back at others to dwell on loss or dread. There are places, however, where a scene seems maybe 3 or 4 minutes too short, like something is missing that is then caught up in bits and pieces of other scenes. This contrasts with the occasionally heavy handed use of asides, mentions and sound effects to foreshadow upcoming points – Possibly they came in a little longer than they wanted, and had to rearrange a little?

I’d like to see what it was like before the last edit, and with a different lighting director – I can’t help feeling like they washed away a bit too much of the really gritty bits that would have made this more effective and engrossing. I’m still a fan of Morrissey, and I’ll have to look at some of Poésy and Birn’s other work to see how they fare elsewhere. It’s not an awful film, it’s just not as effective, engrossing or traumatic as it wants to be – More because they maybe overthought things

I'm just this geek, you know? Love comics, though not a regular reader - Love gaming, PC, board games and wargaming, and reading Sci Fi. Chairman at my local wargaming club, I play X-Wing and occasionally 40k (But mostly X-Wing!) By day I work in eCommerce, by night I'm either still working, reading, watching or writing :)
More Goodness
fearFilmfilm review