…taking my sanity with it. For those of you who aren’t in the know, GISHWHES is the acronym for: Greatest International Scavenger Hunt The World Has Ever Seen. It really rolls of the tongue, doesn’t it? If you’re still confused, here’s a little bit of history. A few years back, Misha Collins (best known for his role as the angel Castiel in Supernatural) decided to help those in Haiti, heavily hit by earthquakes and tsunamis. Most (normal) people tend to start off a charity, smile, take a few pictures, maybe even auction themselves in order to gather up money. In that case things are pretty straight forward. We all sit at home, wire the money to the charity of our choosing and bam! our good deed for the year is done.

Except Misha took it one step further. Giving money was only the first step. Why retain your sanity and your comfort, when you can go out, dressed in bacon? Or cover yourself in peanut butter and offer free hugs? To be honest, there were times when I was looking over the list of items and I found myself thinking that he was some insane puppet master, sitting on a throne and cackling madly, envisioning the mayhem that would ensue, but ultimately I don’t think I met one single person left miserable at the end of it. A lot of the items require

The proof that unicrons do fart rainbows.

those participating to go out into the world and make a random act of kindness: talking to an elderly person, helping someone in need, registering to become a donor. When you think about it, it’s quite simple, yet not a lot of people wake up in the morning thinking: Oh, I’m going to do something different today! I’m going to give something of myself to someone that needs it, however small. Of course, along side those are the items about farting unicorns…

Okay, I admit (as most of those that have seen my Facebook posts about it could attest) I was frustrated a lot of the time, because I felt I was failing my team – did I forgot to mention I joined this year? – but when it was all over, I was happy that I got to meet a group of amazingly talented people, also kinda crazy (but who cares about that?), and I got to have fun, however short lived my experience this year was.

With five world records under our belts (yes, I have the papers to prove it!) and with another potentially on the way, with participants from over 130 countries and enough insanity to go around, GISHWHES has proven itself to be quite a successful experiment. Perhaps people would be more willing to pony up for those in need if they were asked to take action instead of simply waiting for things to happen to 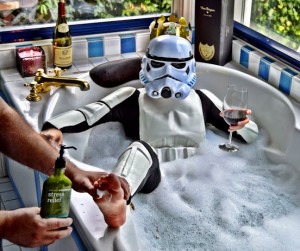 them. From getting pampered at a spa while dressed as a Stormtrooper to designing a heroic captain Picard out of condiments, the sky was the limit. But we did it. Hey, he got William Shatner to join a team so…he’s pretty persuasive.

If you’re not convinced that you should join up next year…I must have forgotten to mention the prize at the end! A three day trip to a location of Misha’s choosing for the winning team. This year it’s Dubrovnik, one of the most beautiful cities in the world. Still, somehow, even those that won’t win won’t feel like losers. You would’ve done something that pushed you beyond your limits and while your actions might seem small, every act of random kindness matter. Remember how you like it when someone gives you a smile? It’s just like that.

For more, less subjective, information, please visit GISHWHES  and think about what you could do to help out someone other than yourself. (Nothing wrong with looking after number one, don’t get me wrong, but every now and again it feels nice to help a little old lady across the street). What’s more important, you don’t even have to sign up for the next hunt in order to do it. (But it’s a great way to justify crazy actions, remember that.) 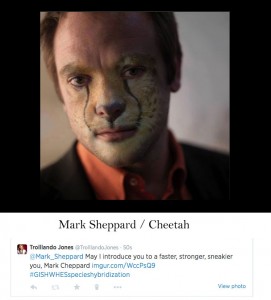 Look at this! Matt even had a helping hand in it.

And look, we even got a best-selling author, David Mack, to help us out with one item: a dramatic rendition of  a section of the California Driver’s Handbook.

What's there to say about me? I love the sci-fi and fantasy genre when I read, but I am in no way limited to that alone. I do think Frank Herbert deserves a statue for his writing(if there is one, point me in that direction, please). I enjoy writing quite a lot, but I am also kinda lazy. If you want to make me happy give me books or Doctor Who collectibles. Or a real TARDIS, in which case I will love you forever.
You might also like
gp blogjared padaleckiMark Sheppard