previous
Jon Pertwee as the Third Doctor: A Retrospective
random
next
Video: First Impressions - when superheroing gets in the way of dating 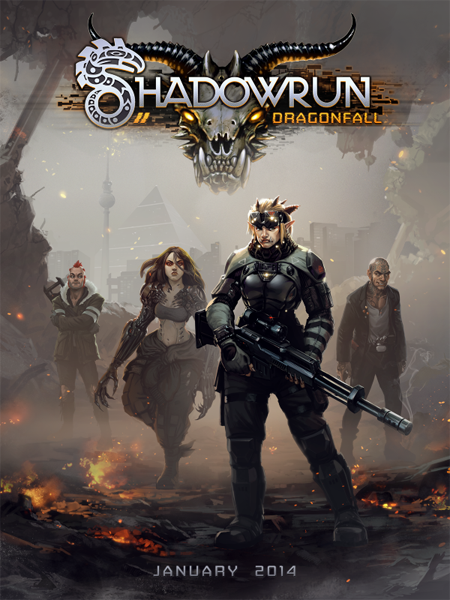 BERLIN. The Flux-State: a stable anarchy enforced by an ever-shifting coalition of megacorps, political factions, and savvy power players. A place where almost anything goes and the right connections can be the difference between success and starvation. Dangerous jobs abound and there’s no better place to earn a quick payday – provided you live long enough to spend it. For you and your team of battle-scarred runners, it’s just another day in the Free City of Berlin.

But a new threat is rising, one that could mean untold chaos and devastation. The only clue: whispers of the DRAGONFALL, a long-forgotten event from the earliest days of the Awakened world. As you find yourself drawn into a maze of veiled dangers and strange machinations, you will come face-to-face with a grim spectre of the past… and alter the course of Berlin’s future.

Dragonfall is set to feature a full length campaign in the new setting of the Free City of Berlin.

As well as the new campaign though, it will also feature new weapons and cyberware to kit out your runners, all new enemies to tackle including magical creatures like gargoyles and fire drakes alongside new characters.

The team at Harebrained Schemes have clearly listened to feedback and have included a new save anywhere feature, enabling players to avoid those frustrating retreads after a runner gets taken out.

Also included are various new editor features and tweaks. These will allow techhead players free reign to use any of the new Berlin environment art, items and characters in their own stories along with assets from the original Shadowrun Returns campaign.

Shadowrun: Dragonfall will be released via Steam January 2014 for Windows, OSX, and Linux and will be free to backers of the original Shadowrun Returns Kickstarter. For others it will be available at a launch price of $14.99/£9.30.

Harebrained Schemes are also releasing the Shadowrun Campaign Pack on the same day. The campaign pack contains the original game and the Dragonfall expansion in one package for only $24.99/£15.51.

Andy Haigh started writing to counteract the brain atrophying effects of Retail Hell, now it's an addiction. Andy is an unrepentant sequential art absorbist and comics are one of his passions. Other interests include Film, Music, Science Fiction and Horror novels and quality TV like Game of Thrones. He can talk about these at great length if only someone would listen. He lives a somewhat hermit like life in The Shire, spends too much time on social media and is still waiting to go on an adventure.
You might also like
breakingcyberpunkHarebrained Schemes