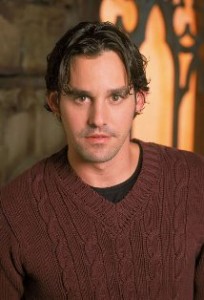 The highlight for me at this year’s Wales Comic Con, which took place last weekend, was without a doubt the Q&A that I stumbled into with Nicholas Brendon, who played the loveable Xander Harris in Buffy the Vampire Slayer. We were on our way to check out some of the ancient death machines from Robot Wars and saw a huge number of people piling into one of the Q&A zones.

I was a huge Buffy geek when it was on TV. I mean, I was obsessed. My parents’ attic is filled with all sorts of memorabilia/junk from comics and magazines to soundtracks and various scripts. Amongst an absolute tonne of posters, mostly of David Boreanaz… I’d not really planned on attending the Q&A but I’m very glad I did and it really was the highlight of the event.

I’m hoping that Wales Comic Con are starting a tradition of having Buffy guests, after Anthony Head attended in September, with Brendon there last weekend. If this is true, I’m banking on an appearance from someone like Amber Benson or even James Marsters, which would be pretty darn swish.

As well as the sitting in on the Q&A, I managed to get a few words with the charming Nicholas Brendon myself. I’m going to incorporate the two for all you fabulous Geek Priders to give you some pure Buffy nostalgia and an insight into the show. Brendon really was a lovely guy who spoke passionately about what he considers to be the best moments of his career. It surprised me how much he himself is like his character Xander, if only slightly less geeky. So here’s what he had to say.

Q: Joss Whedon is currently working on Avengers 2. If you were a Marvel superhero, who would you be and why? 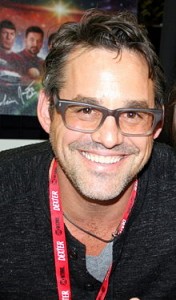 A: You’re gonna hate me. I don’t really like Marvel. I never read comic books when I was a kid. I got into acting at a young age. I played baseball, then I was acting. I guess I’d be the Hulk? I’ve not even seen the movie. I hope Joss isn’t here…

Q: What was your favourite episode of Buffy to film?
A: Easy – Once More With Feeling. I also loved filming Buffy Vs Dracula. To be honest, I loved filming each and every episode. Except for Beer Bad…

Q: Did your penis get diseases from a Chumash tribe? ( I definitely didn’t risk asking this one)
A: *Laughing* I’ve never even met a Chumash person. So no, my penis is disease free.

Q: Which was the most emotional?
A: When I left Anya in Hell’s Bells. The almost rape scene in The Pack was horrible too.

Q: Who was the best or scariest villain?
A: Those nasty fuckers from Hush. The Gentlemen. I mean, most guys I’d be having a cigarette with in between takes, but those guys. Even behind the scenes I’d see them moving along on their little crane thing. No way.

Q: If you could have been any other character in Buffy, who would you have been?
A: No one. I love Xander. He was the best character, he got all the jokes. In fact, Joss had wanted me to move over to Firefly but I was too committed to playing Xander and it conflicted. He wrote the role of Captain Tightpants for me, but I couldn’t leave. Maybe it would still be going if I was in it! But then Nathan Fillion took my eye out.

Q: Have you met any real life Xanders?
A: I met one today. When we were filming Buffy I used to get people saying ‘I’ve named my cat after you’. Now time’s passed I’m meeting kids called Xander. When their mom’s back is turned I whisper ‘I’m not really your namesake. I’m your father’.

Q: Do you still see anyone from the show?
A. Everyone. I still see everyone.

Q: If everyone chants, will you do the Snoopy dance?
A: …Really? *Much hesitation*. Okay.

Then he did the Snoopy dance.

I'm an aspiring film journalist living in Chester. Into all kinds of geekery from N64 to Xbox, graphic novels, cosplay anime and more. I have an unhealthy obsession with Pokémon and the Legend of Zelda series. So much so that I have two Zelda tattoos and various Pokémon lurking all over my house. In my spare time when I'm not busy being a real person and working, I'm writing or making retro games jewellery. I'm also obsessed with pandas. They're fabulous.
You might also like
AvengersbreakingBuffy