I am writing this two drinks down, I didn’t really think this through…

Right so, this Sunday on the Geek Pride podcast it was my first appearance, and the delectable Mike Orvis enlightened us all with the existance of this website, where they create cocktails based on various geeky characters. Not one to be outdone by another website I decided it was high time I got silly and made one of my own. 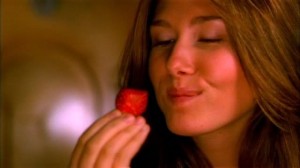 Inspired by my cosplay this year at Manchester MCM Expo I decided that my first geek themed cocktail would be a Kaylee Frye. As everyone who is a fan of the show Firefly knows, Kaylee has a thing for strawberries… so it absolutely HAD to be strawberry based. I also picked some raspberries to enhance the overall flavour, and mint to represent, well, her overalls. The ice cream and whipped cream are just a tasty bonus.

Here’s my “recipe” for a Kaylee Frye.

What you will need: 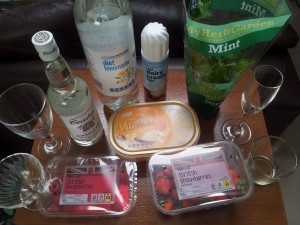 Firstly, put half a punnet of strawberries into your mixer: 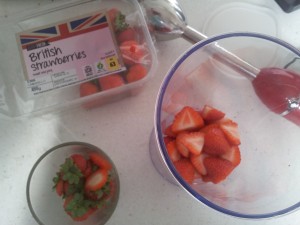 Don’t forget to remove the leafy bits and chop ’em in half to make it easier for your blender.

Next, add about half a punnet of raspberries: 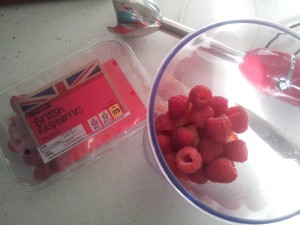 Don’t worry about chopping these up, it’s harder than it seems!

The raspberries make it a little bit less sweet than it otherwise would be, so are an important part. 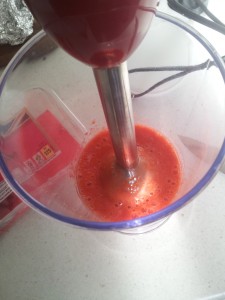 Then add your ice cream and blend again, I used about 4 spoonfuls: 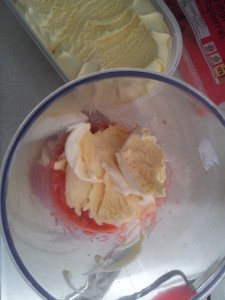 Blend that in and then add a few sprigs of mint, again an important step as without this it would be far too sweet and wouldn’t have that extra zazziness that Kaylee is renowned for: 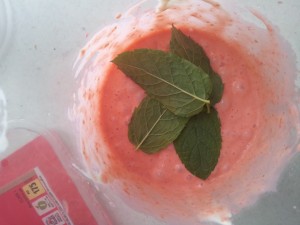 Then blend those bad boys in with the rest.

Now comes the fun part. I added about a third of the bottle of rum to this in the end, and about a quarter of the bottle of lemonade. This was the perfect combination for me but you could quite easily reduce the amount of rum and it would still be heavenly.

I did make a rookie error and use super fizzy lemonade, I would recommend anyone making this lets the lemonade go a bit flat before you pour it in or it’ll end up like this: 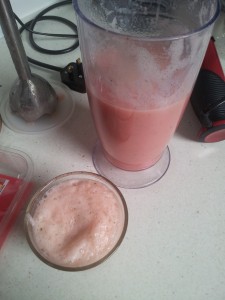 I craftily removed the lemonade fuzz. It was like an alchoholic cream soda!

Oh but man was it worth it. This drink is cute, yummy, and kinda-sorta-healthy if you pretend there’s no ice cream or whipped cream involved. I used diet lemonade, that has to count for something right?

For the pièce de résistance I added this whipped cream topping and garnished it with a teeny tiny adorable strawberry and a sprig of mint leaves. 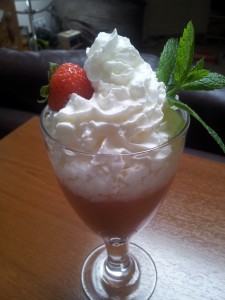 Tune in next time for more silly drunken shenanigans, where I’m going to make my own version of The Hulk!