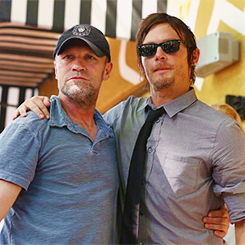 Nearly three years ago AMC has decided to bring to our screens what has now become their biggest hit, The Walking Dead. Based on a comic book, the show revolves around the tale of a group of survivors, struggling for their lives in a post-apocalyptic world that bears little resemblance to the world we’ve grown used to use and abuse. While the comic has been successful, the show’s own fame has been quite a little unexpected, but with a gifted cast that counts: Andrew Lincoln (Rick Grimes), Laurie Holden (Andrea), Melissa McBride (Carol) and the aforementioned Michael Rooker (Merle Dixon) and Norman Reedus (Daryl Dixon) that is hardly surprising.

Which brings us back to Michael Rooker and Norman Reedus, two actors that have ended up playing characters that are completely wild cards, with no connection to the comic books.  Both of them started the show like foul-mouthed, racists, a couple of rednecks thrown in the middle of a camp that seemed to be overflowing with civilized individuals. Emphasis on seemed. Even I found myself surprised with how much of a contrast these two seemed to make with those that were still desperately clinging to their old ways, to their own lives, while the Dixon’s seemingly had embraced the savagery of the new world, almost revelling in its violence. So how did they become the fan favourites? The ones saved time and time again by large campaigns to keep them on?

Exhibit A.  Both Michael Rooker and Norman Reedus came to the show with huge fan bases, but since that’s not enough to keep someone’s attention, I give you: Character development.

More visible for Norman Reedus’s character, this particular piece of evidence has had fans threaten with a riot should something happened to Daryl before his story is completely finished.  (The riot might happen regardless if his character meets what will undoubtedly be seen as an untimely demise). From being nothing but a squirrel eating wild man, considered almost illiterate and dumb by a group he’d saved countless times, he went to becoming Rick Grimes’s right hand man, replacing Shane (Jon Bernthal). In a more graphic display of this exhibit, let’s say he went from  eating raw meat and wearing walker ears as a necklace to holding babies. 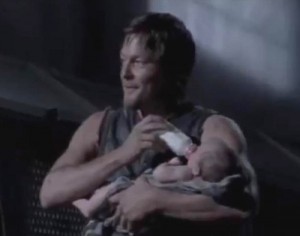 Little pieces were added to the character, small gestures, a flinch here, a soft word whispered there and the fandom of the show was swayed into loving the man that has slowly taken the place of some of the most beloved characters in the comic books in people’s hearts.

Merle was a bit of a tougher cookie, here we have a man that treated women like his own private property, demeaning them, showing off his racist tendencies like they were going out of fashion (given the fact that the human population had vastly dropped, it might have been true) so how do you make a character like that better? How do you fix things in order to get fans to stop looking at him like something that should be stomped on or used as walker bait? 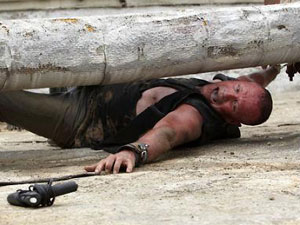 Step 1. Get Michael Rooker to play him.

Step 2. Have said character tied up on a roof in the heat and make him hallucinate.

Step 3. Make sure he’s related to Daryl Dixon who will give you a glimpse into their relationship, making you feel sorry for the both of them.

Step 4. Make sure he’s no longer hopped up on drugs when he makes his next appearance on the show.

Don’t misunderstand me, no one “loves” Merle for who he is, he’s still an ass in the face of most fans, but the slight nuances we get to see in his character’s cold, emotionless mask are enough to give people hope that maybe, just maybe there might be something more to him than meets the eye. He’s not black and white, he’s not just good or purely evil, he’s like most people that live among us, maybe with a slightly looser tongue, saying what he thinks without a filter. And we hate him for that, but we also love him for that.

While the writers might put on paper what goes into the show, what’s being said, by whom or when, it’s the actors that bring them to life, it’s their own report with the character they play that makes a difference and boy, does Rooker make all the difference?

Exhibit B These two haven’t been on screen together enough for us to really know much about them or their relationship, neither Daryl nor Merle the type to go around giving their life story around a camp fire or writing long winded diary entries that would be mistakenly found, revealing their deepest, darkest secrets, but even apart they each showed genuine care for one another. While even bad guys love their mothers is a nice trope (I suppose it applies to sibling relationships to), it was precisely this affection that has granted us access to what makes them tick, separately and in relation to one another. Their scenes together show us how much they grew when apart, from the concussion induced dream  in which Daryl was being chastised and mocked by Merle’s hallucination to Daryl standing up for himself in front of his brother, standing up for doing the right thing, rather than take the man’s word as gospel as it had happened before. 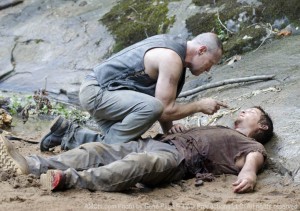 And in comes last night’s episode of The Walking Dead that has sent fans into turmoil over the Daryl/Merle dynamic. During “Home”, the most recent Walking Dead episode, we caught a glimpse of what life at casa Dixon was like, we learn about the feelings of abandonment that Daryl has suffered, that he would stay by his brother’s side forever and that for once he expects Merle to return them. While Merle of yester-season would’ve walked away, expecting his little brother to follow without a word, for once he finds himself giving in, allowing something more important than his ego to take precedence, the bond he wants to have with his brother, a bond that recent events seemed to have damaged. Best part of it all? If you watch the episode you will see that none of this is explicitly stated, it’s all implied by vague words and simple gestures.

And Michael Rooker, if you ever end up reading this thing, and get this far down, you were amazing. Without a doubt, this was his best episode yet, the way his face melts from anger to confusion and pain at seeing his brother’s scars, the proof of his failure as a protector when he had been needed the most, deserves all of the awards. You could almost feel the man’s horror, a man who had no trouble with beating up someone defenceless, with allowing babies to be snacked on by walkers, suddenly brought to his knees by the sight of scar tissue on his baby brother’s back. Given the fan reaction he has succeeded in becoming even more loved by his fans, his acting skills undoubtedly among the best of the show. The fact that Norman Reedus brought his own skills to the table, making for one of the best dramatic scenes in the show so far isn’t something to be ignore either, they played off one another so good that I am pretty sure I heard the claps of the millions of people watching all the way from here. 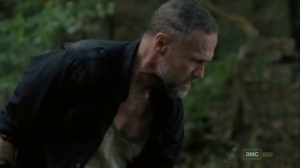 If you want to bring an arsehole of a character that was supposed to last only three episodes into the heart of fans, find someone able to act, willing to go the extra mile and don’t forget to give him something to work with – that might just be the most important thing here.

And don’t forget that there are too many shows out there who use abuse as a device of making the less likely to end up loved characters become suddenly sympathetic. There are however very few shows that know how to use that particular thing with effectiveness. The Walking Dead isn’t even focusing on that angle, relying instead on the acting chops of the two in order to get people to want to know more, giving them the material to work with in order to make everyone happy. They don’t serve you everything up on a silver platter, like you’re nothing but a recipient of what they want you to know, you get to figure things out for yourself, make up your own conclusions about who or what these two are and isn’t that what makes for great television? In order to catch a glimpse of who they really are under the dirt and the foul language, under the anger that’s so overpowering with each of them whenever things don’t go their way, we had to wait, we had to hope and we had to give them the slightest benefit of a doubt. I’m not disappointed. Are you?

What's there to say about me? I love the sci-fi and fantasy genre when I read, but I am in no way limited to that alone. I do think Frank Herbert deserves a statue for his writing(if there is one, point me in that direction, please). I enjoy writing quite a lot, but I am also kinda lazy. If you want to make me happy give me books or Doctor Who collectibles. Or a real TARDIS, in which case I will love you forever.
You might also like
AMCbreakingdaryl dixon