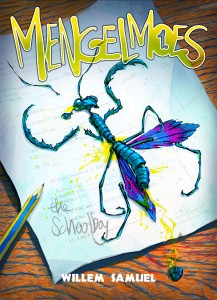 Growing up is hard. There are many rules to learn, rules that once appropriated become an intrinsic part of us. But what happens when the entire playing field shifts and everything is different? How do you deal with learning new things when you barely got the hang of the old ones? Willem Samuel chose to document his struggles with an ever changing world by drawing up what he’d gone through, covering seventeen years of his life. Here’s a press release from Soaring Penguin Press about what we should expect when Mengelmoes hits the shelves in February, 2014.

When you’re a teenager, life can seem a bit random.

When you’re a white teenager, growing up in post-apartheid South Africa, the term you’d use is Mengelmoes: a mishmash. A casual and caustic chopping-up-and-changing of the rules that you were only just starting too get a handle on.

Volume One starts with Willem at age 14 and follows his journey through a documentary-style comic, as he takes on different guises as a young Afrikaner, as he learns to shape-shift from guilty boy to superhero, from devil to saint, from a rock god into an ageing mortal nobody.

This is Mengelmoes, a six-part series covering Willem’s life in South Africa from 1994 to 2011, from a boy in middle school too a young, married professional. The first issue, The Schoolboy – taking place in 1994, the year apartheid ending and Nelson Mandela was elected – is out in February 2014.

Since I’m really lucky, I got to read the first issue, so stick around, cause the review will soon follow.

What's there to say about me? I love the sci-fi and fantasy genre when I read, but I am in no way limited to that alone. I do think Frank Herbert deserves a statue for his writing(if there is one, point me in that direction, please). I enjoy writing quite a lot, but I am also kinda lazy. If you want to make me happy give me books or Doctor Who collectibles. Or a real TARDIS, in which case I will love you forever.
You might also like
breakingcomic bookmengelmoes