Fantasy Flight Games, all pictures taken from their sites.

- Endless hours of bloody-minded betrayal and setting up - be sure to bring your seal-able sandwich bags.
- Potential for post-game friendship strain...but when isn't there?
- Soundtrack CD should be included! (Along with Valyrian Steel letter opener, inflatable Iron Throne and actual Raven).

Ages to set up, ages to play, ages of fun, ages til you play again.

In the wibbly-wobbly misty-wisty days of 2003, before your televisions had been thrown out of the window after the events of, well, [Insert Scene Here], Fantasy Flight Games made an adaptation of Game of Thrones. It was a strategy game, akin to Risk in some ways, but with a dozen layers of complexity, intrigue and backstabbing layered atop each other like some hideous lasagne. I’ve also heard it compared to Diplomacy – a real friendship-breaker, but I’ve yet to have the joy of playing that.

Thrones was expanded on over the years, before and after the TV series arrived, Fantasy Flight bringing out new cards, new factions and even new boards. But it’s the vanilla  “Second Edition” of 2011 that currently sits atop my stack o’ boards, a version of the game that includes six houses, ports, siege weapons, tides of battle and the vanilla map. There’s some whispers at the table of getting an expansion, since people seem to enjoy playing it – and even though I agree with them, this will never be a game I play often.

Fantasy Flight’s “Second Edition”, sans several components. There are so many pieces, even they haven’t set it up right.

The likes of Catan, Dominion, 7 Wonders, XCom, Munchkin, Flux…they’ve been staples of my gaming for a while, across a couple different social circles, and I think that’s because they all share something in common: they’re bite-sized. Catan and Dominion take fifteen to twenty minutes, per player at the table. If somebody runs away with it early in one of those games, or you screw the pooch in X-Com or Pandemic, then obviously, it’ll take a lot less of your evening to complete a playthrough. But with Game of Thrones, there is no quick game, there is no “maybe we can do something after”. It’ll take an hour, per person, at least. This kind of game length means you’re kind of tired of it by the end, so its weeks or months before you feel like picking it up again.

That’s because it’s complicated. Let’s say that first, before I go on to sing its praises. We need to get the elephant in the room out of the way. The rulebook, while enough to get you going, doesn’t cover every eventuality, and I’m not talking about a few blue-moon occurrences. Two or three times per game, it leaves us stumped. That could be because, generally, looking for any rule is a wade through poorly laid out chunks of text, rather than a quick scan down bullet-pointed lists, and when the game’s taking three hours already, patience can wear a little thin. However, if you think to have it open or printed before you start the game, you’ll find a nice Errata sheet on the Fantasy Flight website that’ll clear most, if not all, of that stuff up. I didn’t know about it until I came to do my background research for this – so maybe that’ll resolve a gripe or two.

The game is a mix up of combat and deception-based politics, with the ultimate goal being to seize more Strongholds than your opponents – holding seven at the end of any game turn is an instant victory, but whoever holds the most at the end of turn ten is generally the winner. This turns the last gasp of the game into an absolute bloodbath in some choke-points of the map, but also leaves a lot of room for sneaky underdogs to pick the pockets of their rivals. I generally start the game out being honest with the table, forming alliances and promising not to screw people over, Ned Stark style, but after I find the first two or three knives sticking out of my back, I adopt a kind of Baelish strategy. Usually something involving boats, siege weapons and a well placed House Card.

Time for a feel-trip, Boromir.

Getting onto those praises then, I honestly don’t know how they could get the depth of strategy and intrigue that the game can provide without that element of complexity. You’ve got five types of Orders you can give your stacks of troops (March, Defend, Support, Raid, Consolidate), and three of each Order token – though one of each set is also a special order with some extra powers behind it – mustering troops, more powerful raids, though simply being able to play extra orders alone is sometimes a boon. However, you’ll need to have maneuvered yourself to the upper-tiers of the King’s Court Influence Track to use those – something which takes place in bidding phases where you use the political Influence tokens you’ve gathered as currency.

Using too much of your political clout will leave you exposed when the Wildlings come though, cards of random destruction that punish Westeros for not banding together to defeat them, while the Night’s Watch reward the House that gave them the most support. Getting an extra Knight unit for supporting the Watch or losing your Fiefdoms Influence for being stingy can drastically alter the shape of the map next round. And that’s just the tip of the iceberg. 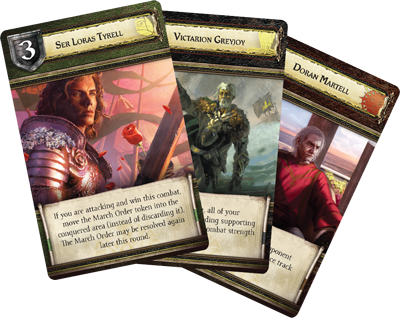 House Cards are played whenever a battle is fought – varying combat strengths and tactical abilities make or break a winning strategy.

While it makes the game really difficult to pick up for your first one or two runs, it gives it a huge replay value – limited only by how long it takes for you to figure out when your mates are going to pull their inevitable double-cross – with playing all of your orders in secret then resolving them around the table adding a quiet tension, not knowing where the enemy’s March order is taking those troops – is he defending the Supplies he needs in Blackwater, or coming for me at King’s Landing? Are they attacking overland from Moat Calin or using a boat to hop up to Karhold and farm Influence?

Its complex, its maddening, its frustrating, its hard to get into and its boring as hell to watch somebody play from the outside. But when you’re playing, trying to guide your house through the murky waters of Westeros politics, trying to fend off your rivals and consolidate your power, its one of the single most engaging gaming experiences you can have – especially if you follow my advice from Tunes for the Table. That being said – I would not recommend this game for everyone. If you’re trying to get somebody into boardgames in general, this is about the worst thing you could do to them. But if you know a few people who like their Risk or Diplomacy, really heavy social-interaction and strategy games, then they’ll love this. Maybe only once a month. But they’ll love it.