We finally have an Alien roleplaying game that remains faithful to the source material. The stress dice are a fantastic mechanics, which crank, up the tension as the suspense rises.

This is a game designed for recreating the Alien experience. Anyone looking for running other styles of games within the Alien universe may be disappointed

This is a fantastic roleplaying game and has everything needed to run adventures within the Alien universe.

When Free League Publishing, the people behind Mutant: Year Zero and Tales from the Loop, announced they were going to make an Alien roleplaying game, people naturally sat up and took notice.

Alien is one of the most iconic – and quoted – franchises in science fiction.  Whilst the later sequels and prequels repeatedly failed to capture the spirit of the original films, there remains an undiluted appeal to exploring the Alien universe.

This is not the first time that an Alien roleplaying game has been developed.  The Aliens Adventure Game was released in 1991 by Leading Edge Games, but sadly failed deliver the Alien experience.  Instead, it felt like the combat system from Phoenix Command was designed for the Colonial Marines (from Aliens), without incorporating the blue-collar workers that are such an iconic part of the Alien films.

Alien: The Roleplaying Game is far different (star) beast of a game.  Incorporating the first three Alien films, as well as the prequel films Prometheus and Covenant, the game is set in 2183 in the Alien universe.

According to the in-universe timeline, Alien: Resurrection has not happened yet, although there are repeated references to military experiments and genetic engineering.  They also assume Aliens Versus Predator (AVP) never happened (as do most of us), so there is no mention of Predators.

Mechanically, Alien: The Roleplaying game uses a version of the D6-based Year Zero system.  This rules-light system evokes the intensity of Alien and Aliens, with the minimum of dice rolling.  One of the key elements are the stress dice, which increase the chance of succeeding, but also carry with them a risk of further danger.  This simple mechanic maintains the growing intensity of Alien, which grows as a character’s stress levels increase.

The game can be run using conventional D6’s, with a 6 signifying a success.  Likewise, on stress dice, a 1 indicates a failure.  However, the Alien dice packs are coloured and coded such that they swiftly and easily reflect the results at a glance and evoke the setting, such as stress dice 1’s being face huggers.

It would be fair to say that Alien: The Roleplaying Game is a game designed for running games in the mood and style of Alien.  It is not for running other styles of game set in the Alien universe.  The available character classes reflect this, as they are limited to archetypes frequently seen in the Aliens universe, such as colonial marines and blue-collar workers.  However, the system is sufficiently flexible for it to be relatively easy to create new character types.

The combat is swift and vicious, for both the players and the enemies.  Anyone expecting to be able to run and gun through the game should watch Aliens again to see how such tactics ended for the marines.  Instead, Alien: The Roleplaying Game works best as an investigative game, where the players are exploring to find out what has happened.

Alien: The Roleplaying game has two modes of play.  There is the classic campaign style play of ongoing adventures, usually with a low character-death ratio.  Alongside this is cinematic play, where the adventure is completed in a single session and the risk of character death is much higher, but is truer to the ethos of Alien (no one ends in a happy place at the end of an Alien film).

The core rulebook is a whopper at nearly four hundred pages long, but is a deceptively easy read and is beautifully laid out.  The quotes peppered through the book prove that the creators were genuine fans of the setting.  The artwork is also fantastic and is incredibly evocative of the setting.

Over half of the book is dedicated for GMs, or Mothers as they are known in this game (a homage to the name of Artificial Intelligences in Aliens).  This section incorporates all that GM’s need to know when running a game, from rules for hostile environments through to starship combat.

One aspect that some may find bizarre were the randomised scenario generation and adventure complication tables.  These D6-based systems felt like a throw-back to random encounter tables in Dungeons and Dragons and felt out of place in a game like Alien.  It might have been better to list them as possible missions and goals, followed a similar list of possible complications that could be encountered.  That said, they are all reflective of the setting and get the creative juices flowing, so in that sense, they are effective at sparking ideas for games.

The GM section also includes a three-hour cinematic style scenario.  This scenario introduces the rules and perfectly demonstrates how cinematic scenarios can work, with competing rivals and personal objectives.

One thing that is great are the abundance of ship layouts, allowing players to accurately plot where they are in relation to each other.  Rather than having to photocopy layouts from the book, they are offered as free downloads from the Free League Publishing website.

Accompanying the release of Alien: The Roleplaying Game core rulebook, there is also the GM screen, which presents the game’s essential references tables for quick checks, to minimise flicking through the rulebook for them.

There is also a Maps and Markers pack, providing an excellent source of further layouts and plans for future games (since finding new maps for ongoing campaigns could be tricky).  This pack includes a series of markers for showing “blips” on the motion sensors (with artwork replicating the blips from the motion trackers), which can be turned to over to reveal what they are.

Overall, this is a fantastic game for anyone with even a passing interest in the Alien franchise.  The light system mechanics make it ideal for the science fiction fans who have not yet tried a roleplaying game but have wondered what it would be like to run around with a pulse rifle.

And let’s be fair, who hasn’t? 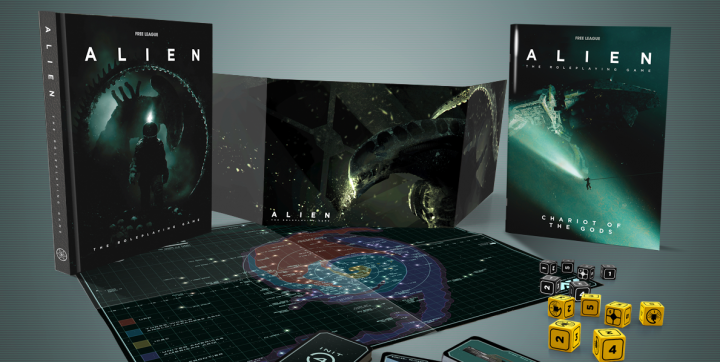 Science Fiction: the final frontier. These are the articles of the freelance journalist Peter Ray Allison. His continuing mission: to explore strange new realms of fiction, to seek out new genres and new visions of the future, to boldly geek where no one has geeked before.
More Goodness
Alienalienscolonial marines