previous
Mega Man Boardgame on Kickstarter - now available in the UK!
random
next
The Hobbit: An Unexpected Journey - Board Game
Tabletop
1 like

There's a good mix of characters despite the set's shortcomings, and as a geeky chess set it's probably one of the better ones I've seen.

You can pretty much guarantee that at any point, if someone mentions the magic word “Marvel” my ears prick up, and you have my full attention. Don’t get me wrong, I love most comic books and graphic novels, but there’s something about the Marvel universe that just gets me. I don’t know if it’s the artwork, the depth and variety of characters or the recent movies that have hooked me so well, but they have me.

So a new fortnightly magazine allowing you to collect a complete chess set, with each piece being a character from the Marvel universe has come out… and I’m all over it like a fanboy rash.

I’d like to say this is the first bi-weekly periodical I’ve been suckered into, but nope. Someone mentioned “Marvel” at me before with Marvel Fact Files… so I have all of those too. The Marvel Chess Collection is published by Eaglemoss as well as Fact Files, so they’re really fleecing my bank account at the moment!

So what do you get for your hard-earned cash with the MCC? Well, the basic collector (ie non-subscriber) will be able to purchase each issue, complete with a new piece to add to their collection. To clarify, all the pieces are totally different. The pawns aren’t all one character, and there aren’t two of the same character for rooks, bishops and knights. The first issue comes with Spider-Man, who is the white knight. 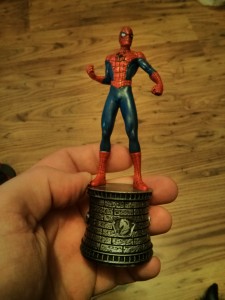 Each piece is made of a high-quality lead-free metallic resin, and they’re fairly weightly and robust. The first piece will look familiar if you also got the Fact Files issues from Eaglemoss, as Spidey’s pose is identical to the statue from that set. This is a little disappointing, and I instantly thought that each one will be a carbon copy of the statues you got with MFF. Thankfully this isn’t the case. All the other figures I’ve seen so far have different poses and styles.

Each figure stands atop a circular base just over an inch tall, the figures themselves are about 4 inches tall, depending on the pose they’re pulling (Captain America and Red Skull both hold their weapons of choice over their heads), and they’re painted pretty well. The bases are all almost identical, save for some slight differences. They all have their respective player emblems (knight, rook etc) on the bases, and the heroes’ ones are all a metallic steel colour. The only difference the villains’ bases have is that they have a slight bronze tinge to them.

So… is your favourite hero or villain included in the set? Well here’s an idea of some of the characters included for each side;

This character list is taken from the website that the collection links to (http://www.marvel-chess.com/), however if I look inside the cover of the first issue, there’s a completely different list of hero characters there, with different rooks (Silver Surfer & Hawkeye), Black Widow as the queen, and the pawns are Daredevil, Deadpool, Iceman, Beast, Elektra, Ghost Rider, Storm and Spider-Woman.

Now, if the website character list is accurate, then I’m not sure about some of the choices – there’s a fair few I’m not familiar with (Molecule Man, Absorbing Man), and if this is a way to introduce people into the Marvel world, they should’ve chosen more recognisable people. There’s no Hulk, Carnage, Sandman, Abomination, Rhino, Deadpool (a travesty!). There’s a distinct lack of X-men and there’s only 5 women in the set. You can pay extra as part of one of the subscription models, and get alternative pieces in the form of the Fantastic Four, but this is a little weak in my opinion.

If the character list on the inside cover of issue one is anything to go by, this is a bit more balanced, and much more recognisable for comicbook geeks and newcomers alike. Unfortunately it’s hard to tell which one is the right one. However I know that with the Marvel Fact Files, there would often be “specials” that focus on a particular character – Wolverine, Thor, Doctor Doom etc. I think it’s a pretty safe bet that we’ll get more interchangeable sets that incorporate other characters, which is probably where these differences in cast lists are coming from. For now, we’ll have to wait and see. 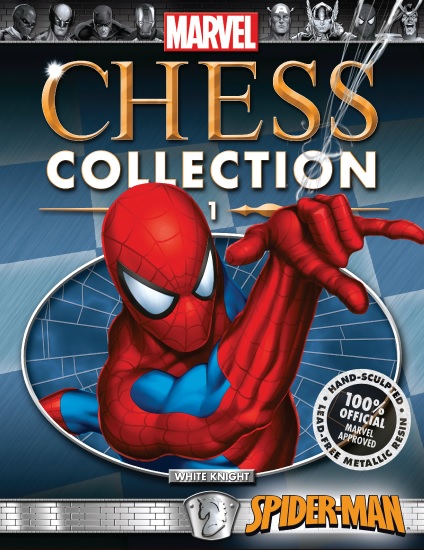 The Marvel Chess Collection magazine itself is a well-printed and beautifully-designed piece of work. You get a good introductory history of the character in question – issue one going into Peter Parker’s humble beginnings, and developing into the angst-ridden hero we have today. (Well not quite up to the present Marvel One issues) It goes into little bits like Doc Ock and Aunt May’s wedding, Peter’s contact with the Alien symbiote Venom, his dealings with Green Goblin and Lizard as well as when he grew two extra sets of arms, and joined the New Avengers.

You also get a pull-out poster (if you want to ruin your magazine by pulling it out that is), with issue one being the cover of The Amazing Spider-Man #40. Another thing to pull out is a guide on how to play chess – this covers basic moves, how to set up the board, how each piece moves and so on. It’s a very basic guide, aiming to provide you with all the rules and knowhow to muddle your way through a game, but then to develop as you go along. It also offers simplistic advice on how to improve your playing (making sure to develop pieces with the longest reach, how to promote a pawn, deliberate sacrificing as a form of misdirection, and so on). 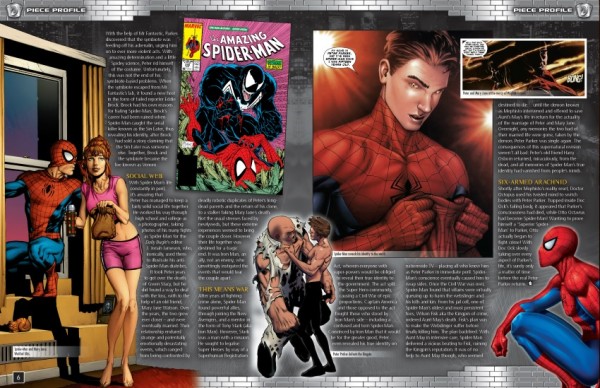 A decent introductory history of Spidey

The latter half of the magazine is a history of the character from a writer and artist perspective. Spider-Man’s issue looks into particular story arcs by Todd Macfarlane and Stan Lee with the last section looking at Spidey’s battle tactics against Doctor Octopus. 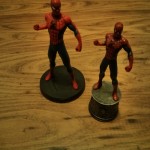 How much will this cost me?

In terms of bang for your buck, the set may leave your bank balance hurting. The usual fortnightly issue will be £7.99. If you subscribe, there’s no change in the price, but you get the option of paying an extra fee taking the fortnightly fee up to £8.99 to get the extra Fantastic Four pieces.

However when you subscribe you do get a binder for your magazine issues, as well as the chessboard (this would otherwise cost you £29 as well as 12 vouchers that you collect with each issue) free of charge.

All-in-all, as an introduction to the game of chess The Marvel Chess Collection is pretty good. You get an easy to understand and informative guide to the game that offers some solid advice, with a good visual display of what it’s explaining. From a comicbook geek perspective, this isn’t a bad set in terms of collections, but it’s missing characters that I would deem a must-have where it comes to the Marvel universe as a whole.

For example – if you talk about beloved characters, you’ll nearly always have Cyclops, Hulk, Shadowcat, Psylocke, X-23, Omega Red, Mystique, Cable and others coming to the fore. The only reason I can think of that these guys and girls weren’t incorporated is if there’s going to be a whole X-men Chess set (which to be fair, is wholly feasible with the plethora of characters available), or if there will be supplementary additions to this initial set, like the aforementioned Fantastic Four set.

I’m not impressed with the cost involved… to make it worthwhile for me the issues would need to be under £5 each. However for the collectors out there, and Marvel fanatics, this will be very attractive either way. There’s a good mix of characters despite the set’s shortcomings, and as a geeky chess set it’s probably one of the better ones I’ve seen, aside from maybe the Alien vs Predator set I covet on an almost daily basis.

Movie and videogame geek, basketball player, guitarist, waffle connoisseur & expert in being a slacking bastard. You'll find me gaming on PS4 as "SpasmicPuppy" most of the time... I'm addicted to Destiny.
More Goodness
ant-manBeastBlack Panther