No real pvp (yet)
Some expansions Kickstarter exclusive
Dice luck, only influence are items to add dice 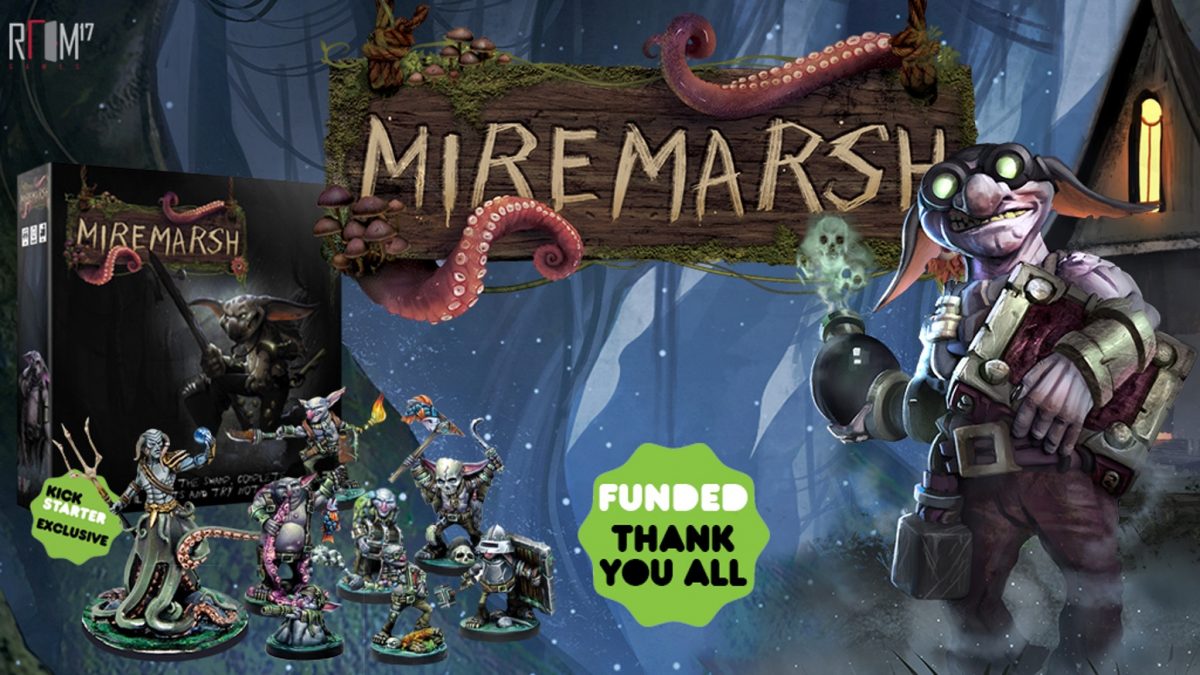 Miremarsh a stinking fetid bog where the mosquitoes are large enough to mug small elephants, the fauna are all higher on the food chain and the locals make the Mansons seem like good neighbours.

Having seen an advert for the game appearing in my news feed I decided to investigate and conveniently there was a demo at my local gaming store in Manchester. Bracing myself I ventured forth to meet this goblin master who could only be a horror from below. 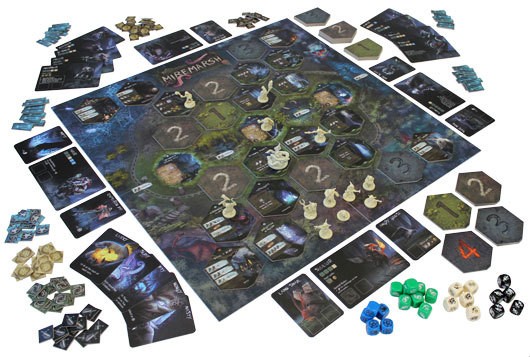 Paul began by regaling to me the virtue of the goblin who apparently have a more “sophisticated” social structure than the evil fur balled creatures we believe them to be (or is that cats?). In fact, they all have their own quirks and desires which are mainly to murder and steal but still!

The aim of the game was to become the new goblin king by achieving some great evil feat! Or by virtue of being the least useless goblin aka the only one alive (I said more sophisticated than you thought not that they were THAT sophisticated).

Equipped with this knowledge I snarled my defiance at Paul who calmly replied: 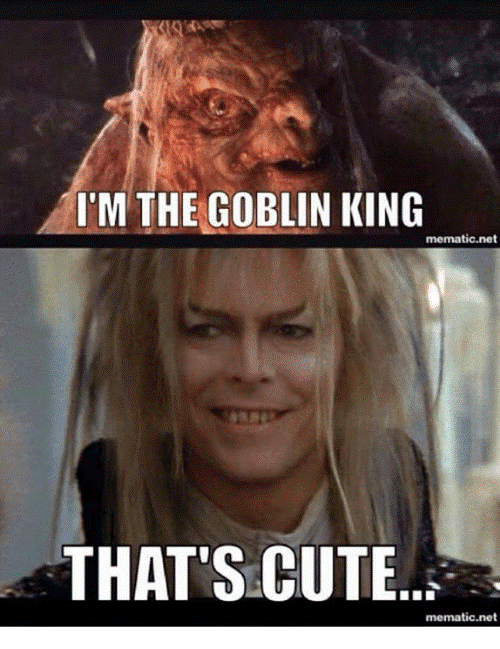 First thing I had to do was draw 2 goblin cards (out of a pool of 6 for a 2-player game) and choose one to be my foul champion. They all had their own talent such as Tanker with his stolen human armour or Gulper with an insatiable appetite and troll like constitution.

I had a choice between Poker who was a decidedly shifty looking character with his make shift pole arm or the more honest farmer looking Catcher game. Being a bit of a country bumpkin myself, I couldn’t resist Catcher with his pitch fork and nonchalant ear scratching.

Each goblin (there are 12 in the core box) comes with their own unique player board containing their unique ability, starting dice and two “pockets” to contain useful things like frogs, knives etc. My Catcher started with 2 green dice, 1 white dice and 1 blue dice as well as his unique ability giving me an imp pet. I also received an awesome mini to represent him on the board (they come unpainted)

With that I was ready to take my first steps into the world of Miremarsh.

The board is made up of a series of numbered tiles representing the dangers and encounters available in the Miremarsh with the higher numbers representing harder quests in concentric rings. A couple of revealed tiles give shops to spend gold and more importantly around the edges 4 quests that could make you king! 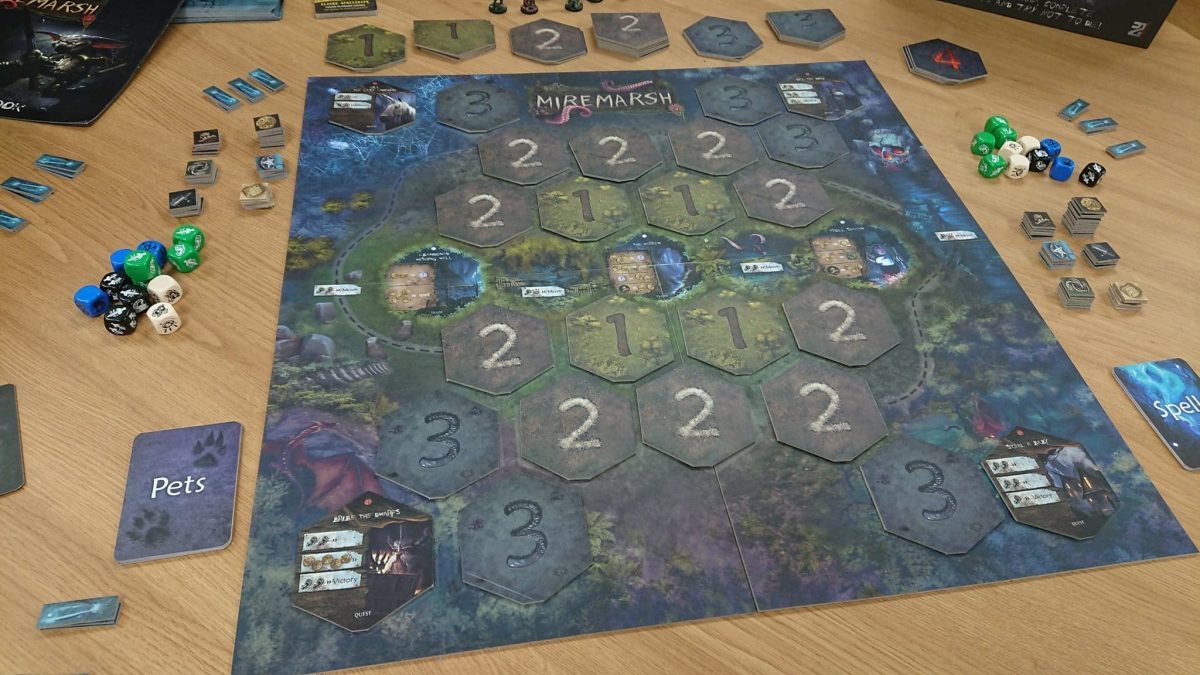 We all started on the very central tile “The Warren” and from there move towards one of the tiles in the corners of the board. Each goblin also receives 9 fish, why? Well if Miremarsh wasn’t dangerous enough with all the evil critters (and other goblins) starvation is also a thing! Eat a fish every turn or die.

To move I rolled all the dice available to me based on any items and off course my starting goblin dice, the foot symbol is what lets the goblin move. To keep the game moving along (and your gobo) a free reroll is granted if no feet were rolled. In the case of several dice having feet showing you choose which one to “burn” and put this dice aside to move. I opted to burn my green foot and move onto my first 1 rank tile.

Arghh it was a monster encounter! From a separate pile at the side of the board draw a corresponding rank one monster tile and place it down.

I’ve encountered our favourite Wind in the Willows character although unfortunately Ratty has seen better days! To defeat the rat, I get to reroll all my remaining dice (excluding the burned move dice) and need at a minimum to achieve the white requirements (or die!). Fortunately, I roll two feet and can use one to achieve the first quest. If I had remembered about my imp I could have used its “wild card” ability to add a dagger and achieve the second level for some gold but sadly forgot.

Whilst I plunged towards stealing a baby in true Labyrinth style, Paul decided to try an kill the current goblin king which is frankly below par.  He rolls his dice to move and unfortunately rolls a tentacle which represents the thing that lurks in the marsh. This causes the player on the right to place the tentacle monster on the board in any square not containing a goblin, so naturally knowing Paul’s love of sushi I planted it right next to him. 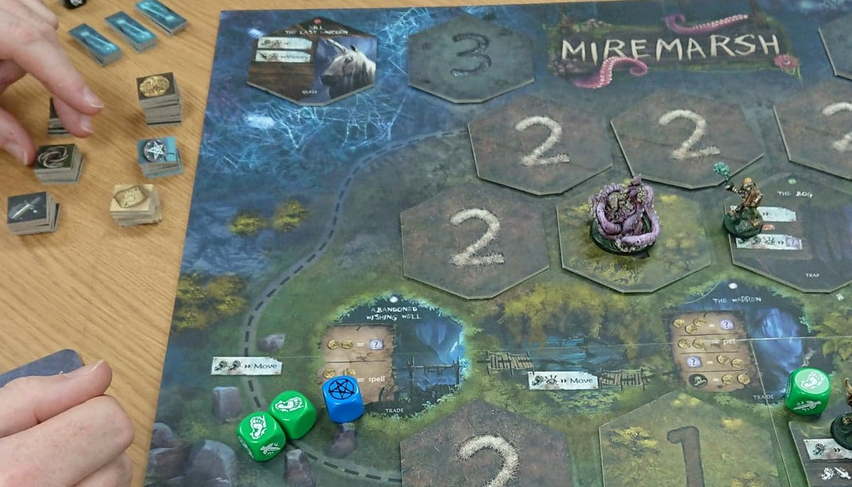 He then used one of his dice as a foot to move onto a new tile which revealed itself to be the bog. There were two compulsory tests available so Paul rolled his remaining dice (minus the burned move and tentacle dice) and having scored two feet and a wild card opted to complete the harder of the two. The wild card he used to represent the eye icon and for his troubles received some loot of which there are two slots for on the goblin card.

Having had a narrow escape from the evil ratty I decided to flee the scene and seek challenge elsewhere. Rather than being sensible and going for another level 1, instead like a bull-goose fool charged into a level 2 challenge. Oh no another monster, this time a blood freezing drowned wraith! 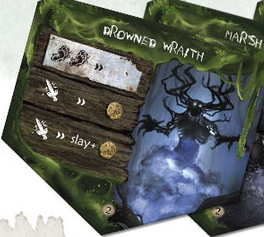 Staying calm Catcher swung and got 2 feet and a wild card on the blue dice which I chose to be a dagger. The wraith looked like it would be fended off as I completed the compulsory challenge and an additional challenge but wait! Releasing my imp added another wild card giving me enough daggers to slay the foul beast huzzah. All the gold was mine (well 2 of it, all hoards start small). 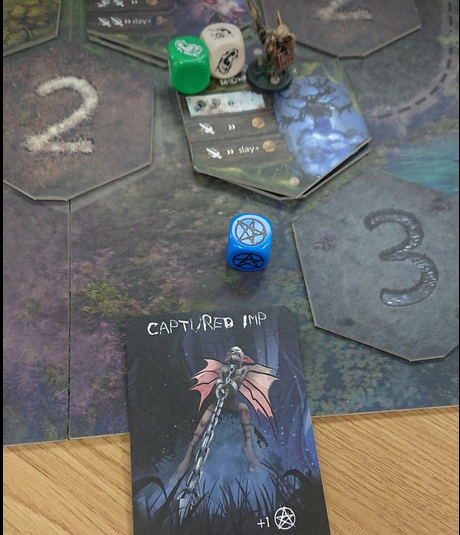 Paul rolled his dice now bolstered by having the dagger he stole last turn and luck against lucks rolled a tentacle for the second turn in a row. With evil glee I moved the monster onto his square but he preceded to turn it into sashimi rather than getting munched with his two sword icons. Sadly, it left him with too few dice to make any further progress and so had to earn his turn there.

A very quick turn for me this time. I moved onto the next square and promptly fell to my death with a truly appalling roll of the dice and the fool hardiness of talking a level 3 tile whilst only wearing level 1 gear. Oh dear what will happen in future turns? 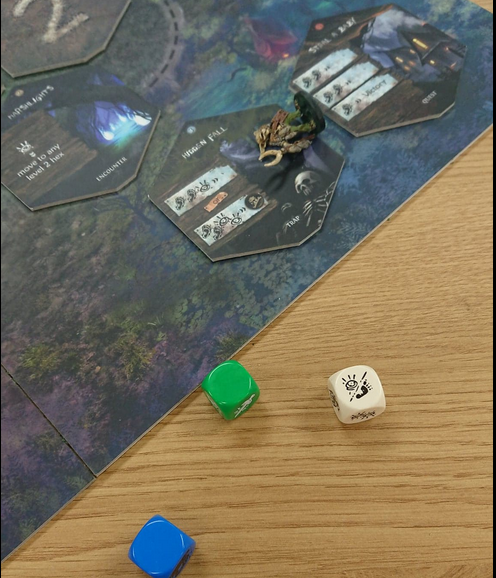 Using his foot icon Paul moved onto a level 2 square where he was required to pass a double eye test whilst only having 1 dice that has a single double eye and yet somehow passes! At this point I began to suspect that Paul was channelling inner goblin and maybe cheating so asked to look at the rule book. The rulebook was small compact and straight to the point so I sadly discovered that Paul was honourable and that the rule set was really that easy to follow! Since it was a beta rule book we did have a chuckle at the staples and prit-stick changes to pages.

Turns out when you die that is not the end at all. Instead you draw from the remaining pool of goblins (6 starting minus our 2 so 4) until there are no more left and only then is death permanent. When you return it can either be back at “The Warren” or where your last goblin died. I opted to return as Gunner for obvious reasons: 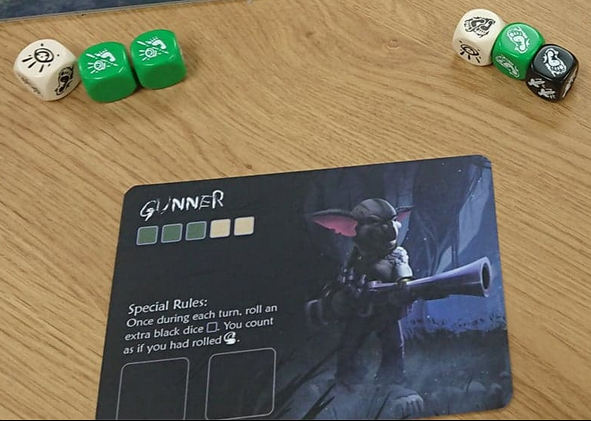 Using his special rule, I blasted through the pit fall trap that had so cruelly took Catcher from this world. The noise of my gun however attracted some unwanted attention:

At this point I unfortunately forgot to take a photo of Paul’s turn. He flipped over a curse ruin and failing to achieve the two wild cards required ended up dying. So long for the Alchemist!

Being only one step away from victory, failure or a horrible tentacled death the decision to press on was not a difficult one. So utilising Gunner’s special ability I took my chances and rolled which was risky since the final tasks are ALL compulsory tasks. Needing a whopping 5 feet for victory it was unlikely and yet victory was mine. Paul commented that it was the fastest victory he had ever witnessed.

The rules were clipped and none of the unnecessary complexity or potential ambiguity that sometimes gets involved in miniature games. With an easy to understand book players can get started playing within a few minutes of starting.

There is a small amount of cunning involved when it comes to paths or picking which fights you can win and what you can’t. We played with only 2 players and it stood the test of fun vs speed that can be a problem with 2 players. I imagine it would adapt very easily to a one player game since we pretty much went our separate ways. More players would have increased the interactions but with turns being so fast there wouldn’t be much down time.

Plenty of ideas came up whilst I was chatting with Paul of future expansions whether planned or as player made adaptations. It sounds like Room 17 won’t be just dropping its new game but supporting it with future expansions.

With the random element of tiles and the variety of powers it has real promise of a game that can be replayed a lot. Especially when you consider the expansions available currently on the Kickstarter page plus stretch goals.

I think maybe for the truly hard-core players it might get repetitive which is fine. Most of us are looking for family games or games to tempt non- gamers which I firmly believe this is. My SO who came back near the end of the game was tempted and she is not a gamer.

I already have an All-in pledge based on my experience with Paul. Upon completing the game, I desperately tried to buy his demo copy but sadly he was adamant that he would need it.

So impressed was I with the simple but fun mechanics of the game I actually bought Museum Rush whilst in Fan Boy 3 after my demo (Room17’s first Kickstarter).  Which was equally fun and I need to write up before seeing about getting all the expansions and Kickstarter extras I am missing! In fact, my SO loves it which for me makes it worth every penny straight away.

If you would like to see a video play through in full, please check it out here: