previous
The Force Awakens Trailer #3 Is Here!
random
next
It's Beaver Fever in Settlers Of Catanada

The Best Depictions of the Big Bad Wolf in Pop Culture

He’ll huff and he’ll puff and he’ll eat your granny because he’s the Big Bad Wolf. Widely recognised throughout many cultures, as a villain and predator, the wolf appears in many a fairy tale, fable and folk lore. I’m pretty sure the majority of us grew up with the Three Little Pigs & Red Riding Hood being some of the first stories read to us as wee babes. When a character is so well known, writers have to work a little harder and add a little twist, to breathe new life into a childhood memory..

Recent pop culture has embraced of the big bad wolf and created a number of depictions that are genius, endearing and a ton of fun. Allow me to share with you my favourites and beware for spoilers if you haven’t watched/read the material I’m talking about.

What better way to change up and old wolf then making him a misunderstood cross dresser with a penchant for Granny’s clothes and piggy porn. In his first appearance we see him sold to Lord Farquaad’s army by Red Riding Hood later to be discovered sleeping in Shrek’s bed. In Shrek 2 Prince Charming gets an unwelcome surprise when he finds the wolf in bed and not Fiona. If you should doubt this wolf is a cross dresser I would like to remind you that in Shrek Ever After his alternate reality self dresses in a maid outfit. Though this wolf’s appearances are relatively brief in the films his presence certainly add a little something for the grown ups forced to watch this film over and over.

Red – Once Upon a Time

Little Red Riding Hood and the the Wolf have a violent history together. We are all aware of the Grimm version but earlier versions, as with many fairy tales, are much darker. In one variation Red is tricked by the wolf into eating her own grandmother and then lured into bed with him eventually making her escape by persuading the wolf she needs to poop and doesn’t want to do it in bed. Weird.

Once Upon a Time decided to change their relationship in a genius goosebump inducing way. From the start of the series it is obvious Ruby is Red, she wears red and even work for her Granny in the local diner, but it is not until we see her back story in the Season 1 episode Red Handed, that we discover the dark secret. 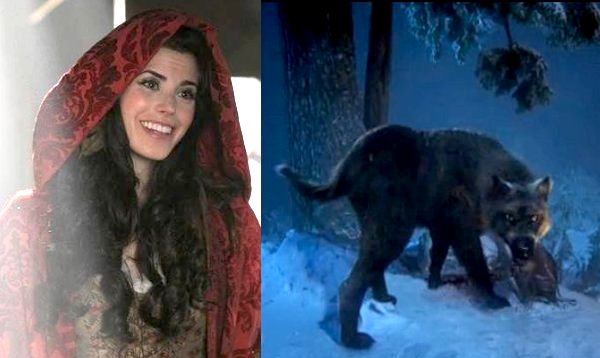 We’re introduced to a village living in fear of a wolf and a granny spending her evenings during the full moon protecting her granddaughter from the threat of the predator. Red naturally falls in love Peter and through some assumptions made by Red and Snow White they persuade him that he is the wolf. In order to protect Peter from the mob and save the lives of the villagers Red flees with Peter into the woods and ties her true love to a tree before the full moon. Snow White lets slip the plan to Granny who panics and heads after them crossbow in hand because they’ve made a terrible mistake. Arriving too late Snow and Granny find Peter dead and they wolf snarling, it is Red who is the wolf and she has just killed her love. It was the magical red hood that had stopped her changing into her wolf form.  It was a moment that made exclaim “Nooooo”. Of course when the citizens of Storybrooke have their memories restored and the curse broken, Ruby remembers and gets to use her wolf powers to do good. She is awesome.

Technically a Blutbad Monroe hasn’t specifically been declared as the ‘big bad wolf’ but he is definitely a wolf with the potential to be bad, and by bad I mean well ‘ard not evil. Monroe is a gentle character who admits to a darker past of hunting and killing, now reformed and a vegetarian, he helps Nick the Grimm track rogue Wesen, is a fountain of knowledge and plays an important role in supporting Nick’s transition into the world of Wesen.

Monroe is endearing, sweet, funny and an excellent clocksmith. He fights against centuries of conflict to break down prejudices between Wesen to live in peace. Going against the wishes of his family he marries a Fusbau (gentle fox like creatures) standing for love over tradition and they are one of my favourite couples on TV.

I’m am going to take a moment to advise to go and read Fables, it is a fabulous take on the fairytale characters and an absolute must read for comic fans. First appearing the the celebrated comic series Fables, Bigby Wolf is the child of the North Wind (father) & mother Winter Wolf but had a tricky start in life. Teased for being the runt of the litter by his brothers’, his father left them followed by the death of his mother and his brothers leaving to learn from their father. Bigby stays to protect his mother Winter’s body but fails. From that moment on he vows to kill something bigger everyday and over time discovers the gifts inherited from his father. Needless to say he lived up to his vow and became the biggest baddest wolf, wiping out whole villages. But let’s skip forward to Fabletown where, now in human form, Bigby takes on the the mantle of Sheriff, utilising his canine senses to uphold the laws. 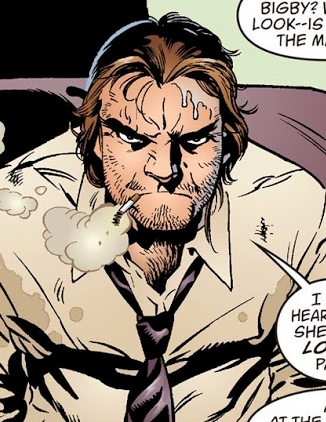 One of the appeals of this portrayal of the big bad wolf, is that although gruff and at times scary, Bigby is a reformed villain who fights with everything he has for the side of good. He also has one of the best romantic story arcs I have ever read, his love for Snow White beginning well before she ever realises, though these things are never simple the emotional investment is well worth it. 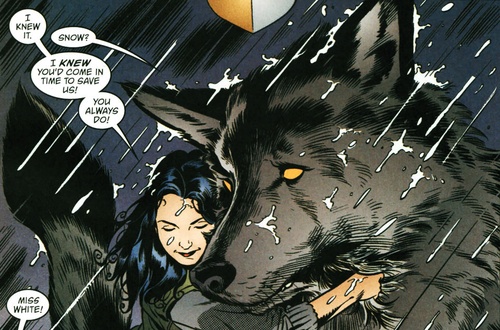 As well being one of the main characters in the Fables comic, Telltale Games also released The Wolf Among Us, an episodic interactive mystery drama graphic adventure video game (wow that’s a mouth full) featuring Bigby as the lead – once again proving how popular a character he really is. I am yet to read the final two trade paperbacks that finish the series but I have my fingers crossed for a happy ever after ending for Bigby and Snow.

Editor and occasional writer for Geek Pride! I prefer Star Trek over Star Wars, collect comics and wish I could be a superhero one day. I tabletop RPG as well as a little gaming, design the odd t-shirt now and again, update my Geek Parenting Tumblr and when I have cash to spend (which is rare) I scour the internet for Wonder Woman collectables. Also Doctor Who and Firefly rock!!
You might also like
comicfablesFilm