During my glance over the stands and companies attending Play Expo 2014, MAG Studios and their games CDF: Ghostship and Aftermath, I was immediately interested.  CDF: Ghostship is the first in the series, with Aftermath as its sequel.  Let me tell you why..

CDF: Ghostship is a free roaming, first person shooter, with a hint of Survival Horror.  You wander the CDF Goliath, a Space Station and a Colony, fighting against Aliens, Crew Members, and enemies of the CDF.  There are four game modes to choose from; Story, Onslaught, Challenge and Simulation.

The Story mode lets you take responsibility for two characters, playing through the various areas such as the Goliath.  If you like the atmosphere of darker games, where the atmosphere really creates a sense of dread, you’ll love this.  Onslaught is a survival mode, where you must fight off wave after wave of enemies using various weapons dotted around the maps.  There are eight maps to choose from, all of them very large areas to roam. 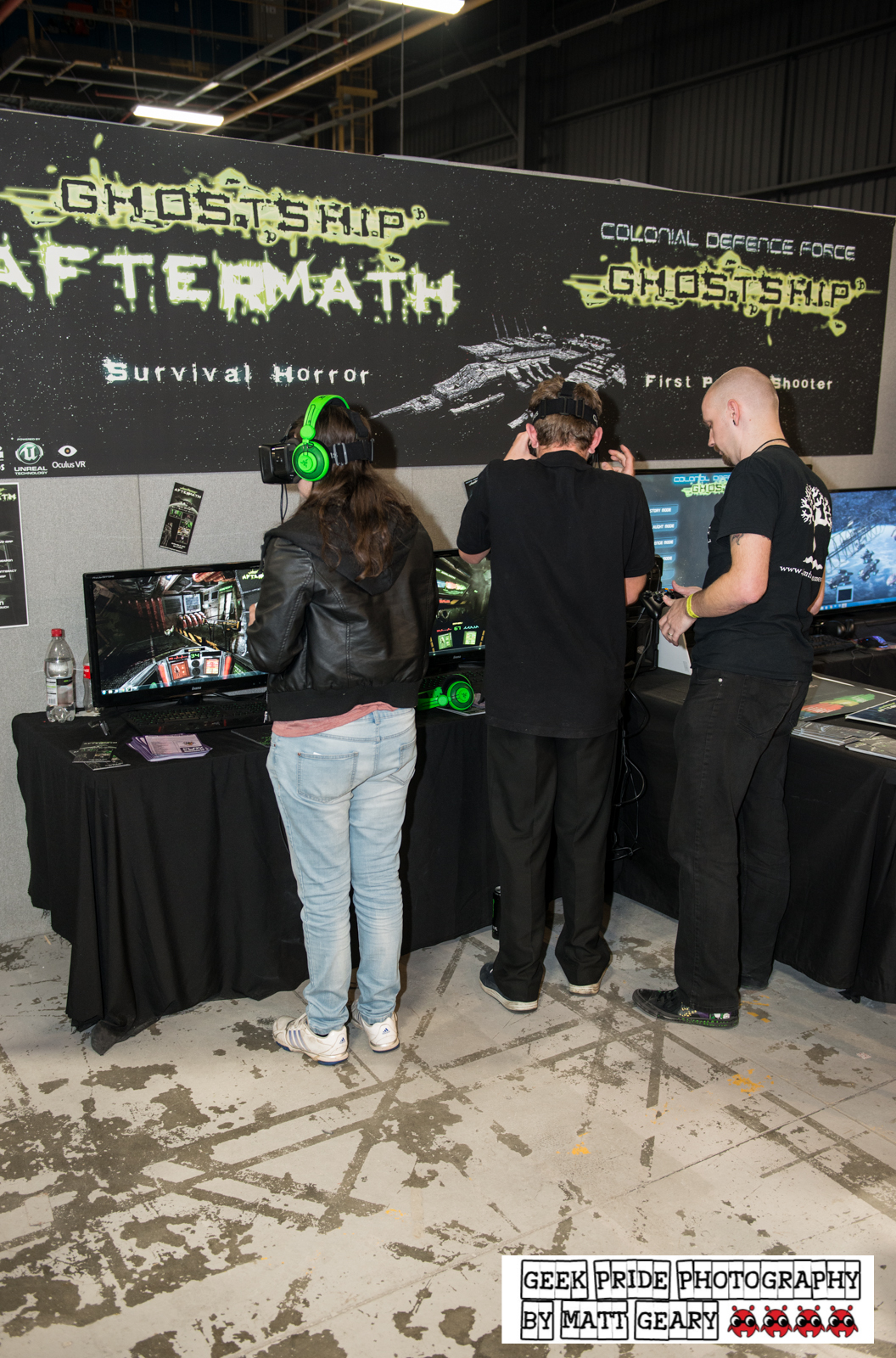 The Challenge mode brings an element of the story mode to a quick game format, having to solve puzzles or kill various enemies, but they are slightly more difficult.  Completing them unlocks achievements, so for those collectors of achievements out there, well worth the time.  Finally is Simulation mode, and this isn’t what it sounds like.  This is the Unreal engines bread and butter; Capture the Flag, Team Death match and various other game types.  As ever though MAG Studios have put their personal spin on the genre; neutral enemies will attack everyone in Simulation mode.  So one moment you’ll be battling each other, then you may join forces to defeat a wave.

The game played very well, and I was soon absorbed within the demo, to the point I never realised that ten minutes had passed.  If you like FPS, Science Fiction and games with atmosphere, then this is your game.  However let me tell you about its sequel.

CDF: Aftermath is a free roaming, first person survival horror game, made exclusively for the Oculus Rift.  You wander the CDF Goliath, a long time after the happenings of CDF: Ghostship, three hundred and fifty years to be exact.  You are a scientist looking into a possible on board infection, of a Ghostship that went quiet two weeks ago.  Your unarmed, and you have to scavenge for weapons and ammunition to fight whatever is on board.  Your oxygen is limited, you have just over an hour and a half, however run and you use it four times as fast.  Your torch lasts an hour, that’s it.  Every action you take, decides how the game continues, or maybe ends.  And talk about ending, there is Permadeath, die and you must restart.

That’s where the game gets even better, every single game is unique.  The ship may be the same ship, with exactly the same layout, but everything else is different.  What you encounter, what you find, where you find it, narrative…EVERYTHING.  No two games are the same.  The environment is immensely immersive, especially if you play it with its native system, the Oculus Rift.

The game is such a huge level of atmosphere, when you look around with the Rift on, you can see inside your helmet.  The helmet has how much oxygen you have left, ammunition, torch battery.  Its a vital part of your interaction within the Ghostship, and the Rift really gives you that feel. 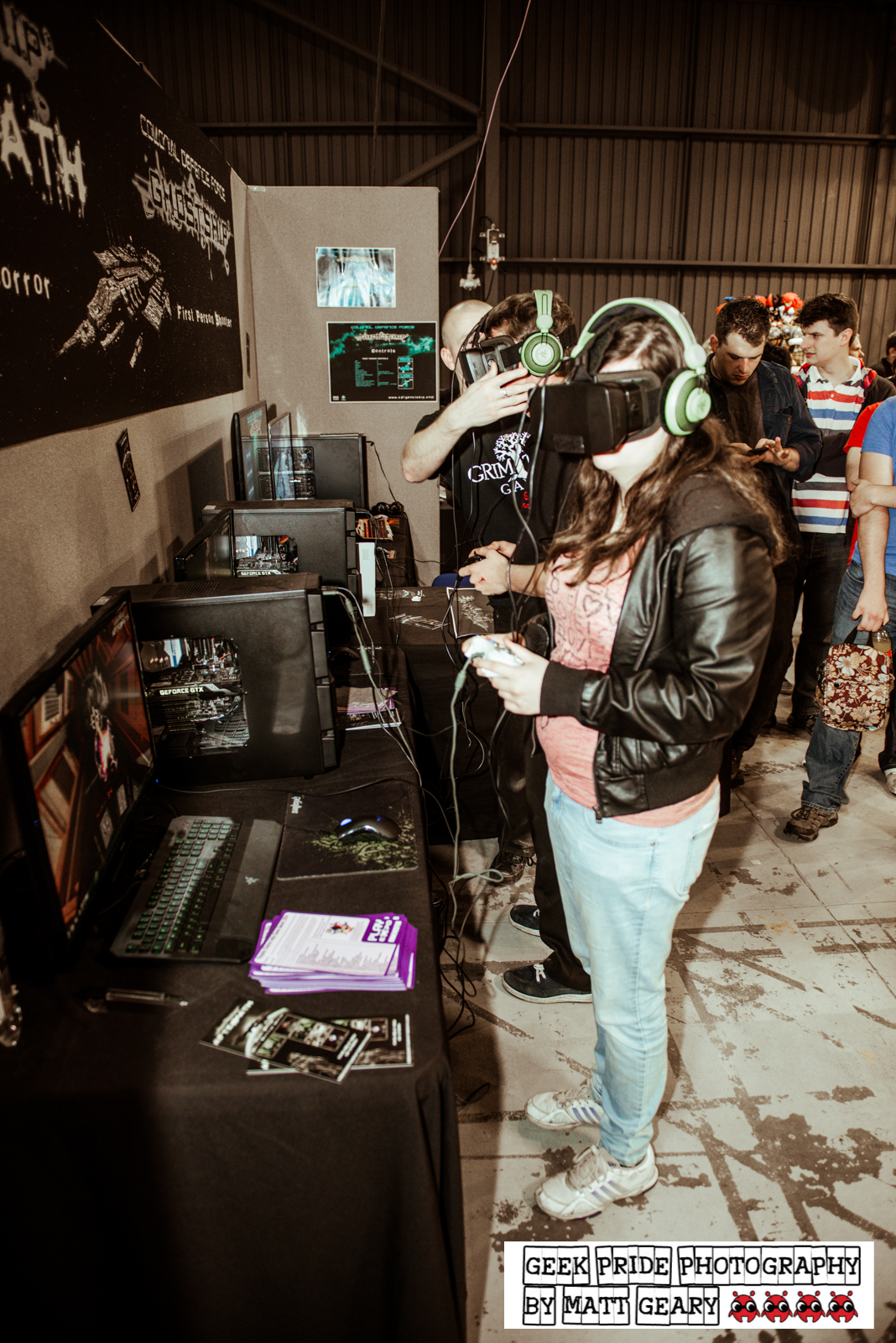 The only complaint, which is also a great accomplishment for the game, is the speed with which you move at.  The ship is huge, and it can take nearly twenty plus minutes to walk from one end, to the other, in a straight line.  That walk however, is worth it.  The atmosphere is there, the shadows feel and look like shadows.  The game was designed from the ground up using the Oculus Rift, and dedicated for the Oculus Rift.  Although you can play the game without, it won’t do it justice.

After giving both games a go, I managed to have a chat with Shaun Williams, owner and main developer of MAG Studios.

Tell me a little bit about CDF: Aftermath?
Its a Sci-Fi Survival horror with rogue like elements, such as Permadeath.  Its a free roaming game within a massive huge Spaceship.  Each game is one life, each game is unique with random narrative, random objectives, random storyline, where the aliens are is random.  Each game is different, totally, no two being the same.

Why is this game Unique?
Its made for VR, not a PC game ported across for VR.  Its one of the first games properly made with Virtual Reality in mind.  It was designed from the ground up, the way you interact with the environment, you atmosphere, even your helmet.  Its quite a slow moving game, but it gives you time to interact with the atmosphere and the environment around you.  You have one life, its very rogue like, if you die, that’s it; Permadeath.  You have to find oxygen, and there are bad guys lurking around everywhere.  Guns are scares, as is the ammunition.

Who is this game aimed at?
Sci-Fi fans will love this, just walking around a spaceship in VR is enough.

How long has it taken for you to make the game?
Two years, the first game MAG Studios made, CDF: Ghostship, we actually put on hold to produce Aftermath.  We were going to make Ghostship VR compatible, but decided that we didn’t want to port it.  We wanted to follow feedback given about how ported games don’t really work well in VR.  So we created a game that was specifically designed for VR, which was Aftermath.

Tell me about CDF: Ghostship?
CDF: Ghostship is a first person shooter.  Its based around two hundred and fifty years in the future, taking a lot of influence from science fiction films and stories, like Aliens, The Thing etc.  The main emphasis is on the a free roaming game, on a huge Star ship, there aren’t any games like that.  Aftermath carry’s on that trend, but in a survival horror element.

What’s the difference in your characters within the game?
In Ghostship you are a Marine, in armour, armed to the teeth.  You can move quicker, kill better and do more with it.  In Aftermath, your a research scientist, wandering the same ship, but in a huge bulky suit, not designed for combat.  Your not armed with a hell of a lot of weaponary, so you have to rely more on instinct.

I really enjoyed my time playing the games, and seeing someone’s passion for the science fiction scene take shape in such a good game filled me with hope.  From what I have heard, Alien: Isolation may look very pretty, but it doesn’t play too well.  Look no further, this is the replacement, and it even has a prequel to boot!  Aftermath is out now and Ghostship is out on the 31st of October.

Been a gamer since my Dad and I built our first PC back in the mid-nineties, still a dedicated PC gamer. However in the early noughties I got into Wargaming and, again, never looked back. I keep my hand in both PC gaming and table-top gaming as much as I can.
More Goodness
InterviewsMediaPreviews / Interviews