previous
Starbound: To Infinity And Beyond
random
next
Security Accessories for your iPhone and iPad
Video Games & Tech
0 likes

Great premise, a lot of potential

DayZ is, quite frankly, an incredible game. Set in the fictional post-Soviet state of Chernarus, though now expanded to many other locations each with their own distinct characteristics, it sees the player take the role of a character in the massively multiplayer environment of a zombie apocalypse.

The world has gone to ruin, racked by a terrible and mysterious virus that turns people into zombies. It is your job to attempt to survive this horror for as long as possible, going from a fresh spawn with nothing more than a can of beans to your name to a hero survivor rolling around the map in a rocket launcher equipped Humvee, packing enough weaponry to start a small war. From the persistent fear of bandits and the permanent threat of hunger and thirst, DayZ is quite possibly the greatest survival game currently out there, giving a comprehensive and engaging look at what it may be like to live through a zombie apocalypse.

Unlike the ever entertaining Zombies mode in Call of Duty, it’s not just endless waves of the undead hurling themselves at your Ray Gun, it’s a long procedure that tests your wits and instincts at every minute. Run into a town unawares and you’re just as likely to find your head taken from your shoulders by a ghillie suit clad sniper on the hill 700 metres away as you are to find yourself surrounded by a pack of slavering zombies. It is a game designed to make you work for its love, creating an environment that leaves you near permanently tense, your eyes constantly flitting around, looking for that flash of movement that will indicate shit is about to go down. As a long term sufferer of being straight up murdered, I can assure you that DayZ is not a game for people of a panicky disposition. It is a game of commitment, particularly with the Epoch addition, a mod that has allowed players to craft, building great fortresses that further serve to increase the “nope” moments of the game. 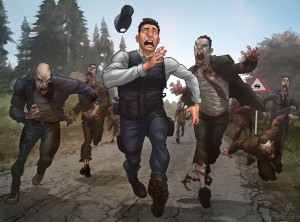 DayZ is bubbling over with potential and possibilities. It is a world where you quickly realise it is your fellow players who are the biggest threat after all and you must traverse a huge nation, running from zombie hordes, making fragile deals for much needed supplies and engaging in gun fights that, due to the slightly dodgy combat mechanics, are sure to keep you white-knuckled. So if your blood pressure is up to it, and you have the patience, it is definitively one of the single greatest gaming experiences currently available. There’s just one little problem. I’m not describing the standalone. I’m talking about the original mod.

DayZ started as a mod of Arma 2: Combined Operations, created by Dean “Rocket” Hall. Since the initial mod it’s massively expanded, new ideas constantly being added. Most prominent of these is the aforementioned Epoch mod which adds crafting to the game, allowing players to further engage with the survivalist world of DayZ. There are also a large number of alternative locations to Chernarus, from the wintery wasteland of Namalsk to the tropical Lingor. In it’s current format, utilising Epoch and on a map such as Panthera, which opens up a lot more buildings than on the original Chernarus map, the DayZ mod is really peaking. It’s also a lot better than the standalone game.

Now, in all fairness, the standalone is in very early development and it is being emphasised that this early access release on Steam is the very, very early stages of the game and is for those who wish to take part in the development process, helping the game’s creators, including Dean Hall (who joined Bohemia Interactive, creators of Arma, to make the standalone), to improve upon the established foundations and work towards the comprehensive, final product. The difficulty is that we’ve been waiting for the standalone for about a year now and have experienced several pushed back release dates. Epoch is showing off the frankly stunning potential of DayZ while the standalone is buggy and sparsely populated. 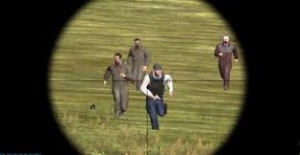 And just when you thought it couldn’t get any worse…

The difficulty really comes down to this disappointment of potential. When the standalone reaches its final evolution and presents itself as a fully realised vision of the DayZ dream, it will surely be incredible. A lot of the promised features are just plain awesome, programmable computers and base security systems for example. The difficulty is that a lot of these features are already in the Epoch mod and it just seems slightly disappointing that, after all this waiting, the standalone doesn’t even match up to the current stage of the mod, let alone exceed it. I’m definitely going to be keeping my eye on the standalone and waiting for it to reach the desired level of progress but, at its current stage, the DayZ standalone has entered the world not with a bang but with a whimper*.