- Easy To Pick Up

A Great Fun Game Which Doesn't Need Your Brain!

I can’t remember the last time I played a game that was just this relentless and tough. From the moment you press play, you are put straight into the action and it’s time to learn fast or crumble immediately.

Are you looking for an action game with a story? Then this is not the game for you. Is there a mission for your character? Yes and no. You are tasked with destroying an array of robots and protect the few humans on this planet, a planet that doesn’t seem to adhere to gravity. 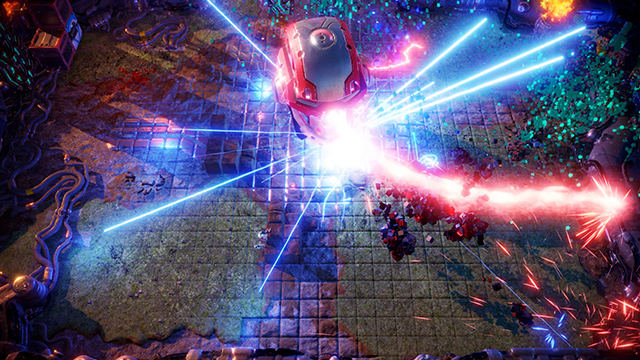 The controls are simple enough, you have your left control stick for direction and you use your four action buttons on the right hand side for shooting. You can also dash around when surrounded or needing to pass a laser. Within five minutes, you will have the controls mastered.

The action is just breathless from the very beginning. There is no chance for a breather and don’t even think about having a break. If you are touched by one of the enemies, then you are dead. Not only does that suck, but you also have to do it all over again from the beginning. The game is unforgiving and you will rage quit if you aren’t careful.

As for the actual enemies, most of them are simple enough to defeat. But, it’s the attacks they come out with you need to be careful of. The bosses each give their own challenge and takes inspiration from classic games to showcase some rather varied stages of difficulty. They also send out hordes of enemies to ramp things up a bit and don’t expect to survive.

You will die A LOT! But, persistence will see you through.

The game can get a tad repetitive at times and seems to lack a general ‘purpose’ BUT with video game veteran, Eugene Jarvis, (seriously, look this guy up, he helped to make many classic games you love) on hand, the team at Housemarque manage to create a tight game which can just be picked up and played successfully  keeping itself simple and boasting some beautiful graphics amongst the madness.

A must have for shoot-em-up fans! Also, that soundtrack is fantastic, giving the right mix of retro and futuristic!

Nex Machina is available now on Playstation 4 as well as on PC.