East Grestin, Arstotzka. November 1982. The land border between the glorious Arstotzka and the pig-dog bastard territory of Kolechia.  I walk from my lowly grade 7 apartment to my job as the country’s only immigration inspector, manning a booth and protecting our nation from it’s enemies. My shift starts at 6am and government employees at my grade do not get vehicles. If I do well at my job then I hope to relocate to a more luxorious grade 8 level property. Then again my wife, mother-in-law and daughter need medicine and I am the only source of income within the household. If I fail to pay my bills and gather debt then I will be imprisoned in a work camp. If I resign from my post or make too many mistakes then my family will be sent back to our village of origin and could likely starve. My booth is freezing cold and the work is monotonous, yet defection from Arstotzka is punishable by death and my replacement would be easy to find. Many want to take my place.

Make no mistake, Papers, Please is likely to be one of the most grim games that you will ever play. Set in a fictional communist eastern bloc state, the Arstotzkan border has just been re-opened following a six year-long war with the neighbouring country of Kolechia. The war left many dead and abandoned on the wrong side of a fictional equivalent of the Berlin wall but at last Arstotzka has claimed it’s half of the town of Grestin and is again ready to welcome it’s lost citizenry home with not-so welcoming arms.

Your job as the passport control inspector is to check the documents and interrogate those looking to cross the border. At first your tasks are limited to admitting Arstotzkan citizens only and politely turning all others away. As the game progresses though, border controls are relaxed and then hastily strengthened again. What starts as a fairly simple and mundane task quickly becomes an extremely complicated challenge as you struggle to check all of each applicants documents and even fit them all onto your constrained desk space. You are tasked with admitting only those with the correct documents and protecting the country from illegal immigrants, people smugglers, wanted criminals and terrorists. 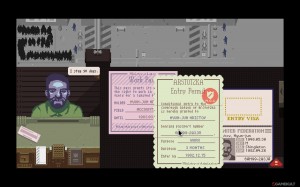 As controls are tightened, sifting through each applicant’s paperwork becomes increasingly difficult

Any hope of riding comfortably on a public sector gravy train are soon dashed too as Arstotzkan immigration inspectors are paid per processed application. As processes become tighter and more bureaucratic, you can have multiple documents to sift through as well as fingerprinting applicants and even using body scanners to check for drugs and weapons. As if that was not enough, failing to follow correct process will cause a salary deduction and if you make too many mistakes or fail to correctly manage your meagre finances then you’ll be out on your arse. Financial management does play a huge role too as you have a family to support and it’s a family which never seem to grow tired of either getting ill, hungry, cold or possibly even all three. Allowing your family to die and leading a singleton’s life is not an option as the government only want honest family men working the border.  As time goes on, other opportunities will arise to make money on the side but your superiors make it clear that this is strictly forbidden as are any violations of the rules unless you are following an order from them.

Games which simulate boring real-world jobs are nothing new and recent years have seen an influx of farming and street cleaning sims, often the subject of online jokes before eventually winding up in the bargain bin. Papers, Please is a different game entirely though. It’s 16-bit Megadrive-esque visuals, grey and red colour palette and chip-sound create an engrossing cold-war aesthetic and what starts as a simple point and click simulator quickly turns into a game which questions the player’s morality and likely comes as close as any game has been to recreating the kind of lives which many border guards still lead in the likes of China and North Korea.

You can be the ultra-nationalist jobsworth who denies all but those with the right documents or you can turn a blind eye for those escaping persecution or admit the wife who begs you not to separate her from her husband. Papers, Please could be accused of being repetitive but to make this accusation is to miss the point entirely as it is meant to be repetitive. The challenge is in maintaining your full attention whilst flicking through the endless pages of virtual paperwork and never letting your guard down.

If I have any complaints about Papers, Please then they are probably that the game doesn’t take these opportunities for morality and decision-making far enough. Applicants can only be questioned to a very basic extent and the player does not have the freedom to further interrogate those who, despite having all the correct documents, seem to be a bit dodgy or will change their story at the last minute. It is probably safe to assume though that these limitations are due to the game being developed and published by a single person. As the game goes on however, these problems become increasingly obvious and glaring and it is only because of these issues that I haven’t scored the game more highly. The final build of the PC version also crashed twice for me during review and, as the game has been in public beta for quite some time, I find it hard to believe that these issues wouldn’t have been brought to the developer’s attention before the final version was released last week.

At £6.99 (UK) or $9.99 (US) Papers, Please isn’t the cheapest indie game out there at the moment but it is one still definitely deserving of your money and time. With the possible exception of Thomas Was Alone, I honestly can’t think of a game from a sole developer in recent years which has grabbed and impressed me like this one has and I really hope that iOS and Android ports are released since the control scheme could work wonderfully on a tablet. Whilst the story mode can be completed within a few hours, finishing the campaign will unlock some challenge options which should help to extend replayability. This may not be the prettiest game that I have played so far this year but it is definitely one of the most memorable and I hope that it receives the high degree of recognition that it deserves. Glory to Lucas Pope and Glory to Arstotzka.

Papers, Please is now available for PC and Mac from www.papersplea.se, Steam, The Humble Store or GOG.