If you love Dark Souls or Metroidvania games, you will adore Salt and Sanctuary.

Salt and Sanctuary is a game that entered my radar, as it will have done with many people, when the YouTuber VaatiVidya did a preview video for the game: a small indie effort from a two man team. Vaati generally does Soulsborne-related videos and it was immediately obvious that, the 2D platforming style aside, Salt and Sanctuary was wearing Dark/Demon’s Souls’ skin and parading around as the famous series. An interesting take, and something to keep an eye on, I decided.

And I’m very glad that I did. 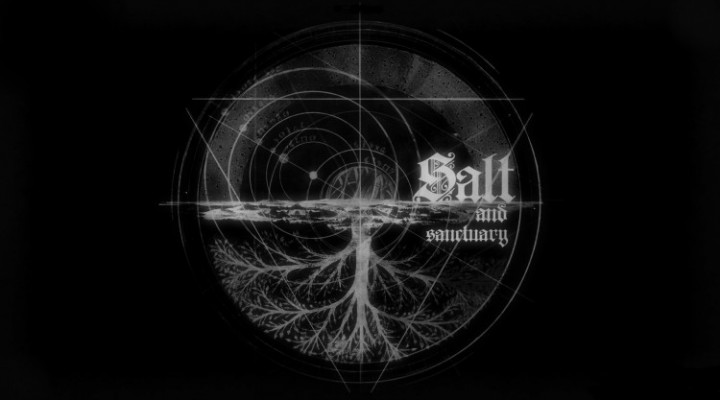 Salt and Sanctuary loves FromSoftware, developers of the Souls series and Bloodborne, the same way a pubescent girl loves Justin Bieber: in a borderline-unhealthy but ultimately benign way. The game starts out with a voiceless protagonist that you’ve customised who fights an incredibly difficult boss and wakes up on the shore of another realm. So it’s Demon’s Souls, basically. You then walk up the beach and find a Sanctuary to rest and level up in, and the game begins properly.

If you’ve played a Soulsborne game before then the style doesn’t need explaining. For anyone who has decided they don’t enjoy fun, Salt and Sanctuary is an action RPG with a tight combat system and punishing but fair enemy design. You defeat enemies and gain Salt to use in levelling up and upgrading weapons, as well as random drops including weapons and armour pieces. Progression is gained by unlocking shortcuts or new Sanctuaries, and you will lose your Salt gained if you die without reclaiming it from the enemy that beat you.

But this isn’t just a copy. The 2D style, gorgeously-rendered and animated, is a clear departure, and the level and enemy design directly pulls on the Metroidvania style of games. Particularly Castlevania: Symphony of the Night. New areas are also unlocked and progression achieved through new abilities such as wall-jumping, with secret areas and items also hidden behind such abilities. 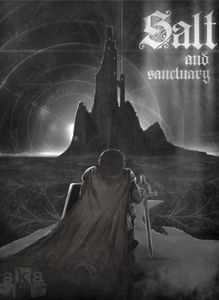 Additionally, you gain gold as a separate resource used to purchase weapons and armour, as well as upgrade materials and miscellaneous adventuring items. This creates a nice balance missing from the Souls games and allows you to keep some progress if you, for a purely made up example, stupidly fell to your death because you sneezed. In true punishing fashion, though, you lose a decent percentage of your gold each time that you die, keeping a frisson of punishment alive with even recoverable deaths.

More than that, Salt and Sanctuary has taken its decision to work one dimension short and run with it. Enemies and bosses try to block you in, requiring you to roll around/past them. There are also traps and set pieces built upon this idea. Yet the combat is tight and very-well designed, with a few obvious examples of overpowered play.

The quality in the design work, visual and aural, shines through from the opening moment. The style is faded at times, like a salt-addled shirt drying in the sun, but also vivid and vibrant when needed. Some characters are choppy and static, but others fluid and serene. And the sound design is great, with haunting or pumping soundtracks where required and meaty sound effects to accompany the striking of weaponry or the moans of shambling creatures. 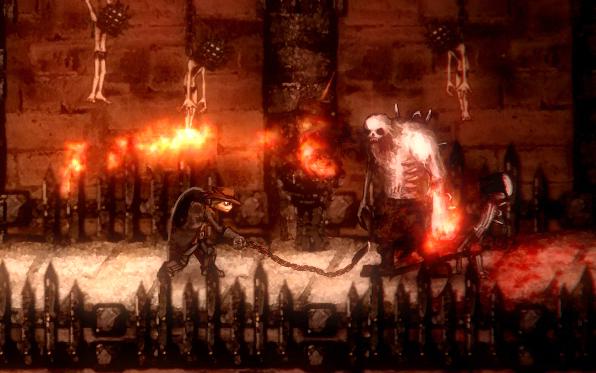 This is not a perfect game though. There are spikes and troughs in the difficulty curve. For me, the Mad Alchemist presented a stumbling block, a whole evening of frustration and swearing. Going back and levelling up/upgrading my equipment for a while was mainly what was required, as well as the standard gitting gud that accompanies any game like this. However, once I had gone back and spent a short period grinding, I found the next hour or two of gameplay ridiculously easy. Particularly with my giant Warhammer, which turned everything into mush with a beautiful efficiency.

Still, with Dark Souls 3 a couple of weeks away, Salt and Sanctuary is a perfect nicotine patch to tide you over as you dodge the spoilers coming from Japan/’famous’ streamers.

Though perhaps that is unfair: though the game loves its inspiration more dearly than Hannibal Lecter loves an unguarded kidney, this is still a brilliant game in its own right. Tough but fair, tightly-designed and memorable, Salt and Sanctuary deserves a place well above the Souls pretender Lords of the Fallen in the heart of the average Soulsborne fan, and even to be judged on its own merit as a fantastic accomplishment.