Slower paced than the typical game, but this makes for a more thoughtful experience

An ideal alternative for those looking for a different take on the zombie genre.

With the current deluge of zombie games, the shambling undead have become the cannon fodder of video games.  Players have become so desensitised to the sight of a reanimated corpse, that shambling hordes of undead are now being mown down in a hail of bullets by players, leaping through the air with guns akimbo, John Woo style.  It has thus become challenging to actually do something new with zombies, but Undying has breathed new life into the genre.

Most zombie games are akin to the much-maligned World War Z film.  However, Undying actually make you care for the people involved, much like the original World War Z by Max Brooks.

Undying is an adventure game in which players take on the role of a mother during a zombie apocalypse.  The twist is that players have to protect the mother’s child, as well as defending themselves, from the undead.  The mother has also been bitten, and if they tire themselves out too much, they turn into a zombie.  This brings an added complexity to the mayhem and makes for an engaging premise.

Overall, the game is a mixture of action/adventure and base-building, similar in many ways to Dead State.  However, there is a much stronger narrative in Undying, with the focus of the story centred on the mother and her child.  This is a game that is just as much about family as it is about the rising dead.  Not only does the child need to be protected, but they can also become scared and need reassuring. 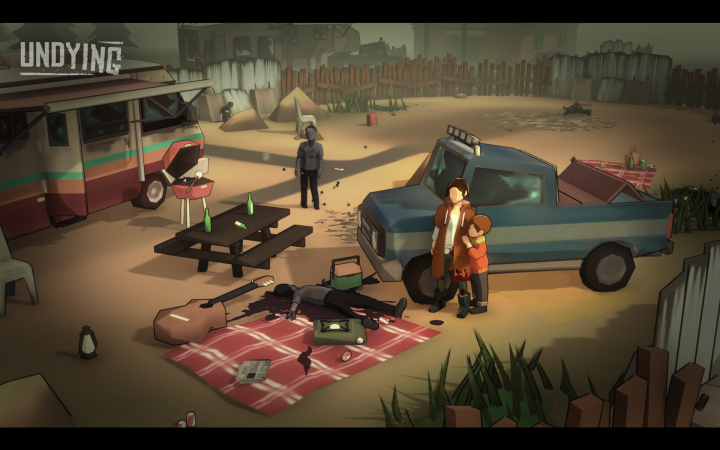 The action is slower than a typical zombie game.  These are the classic Romero shambling undead, and thus the game takes a slower-paced approach.  That is not to say it is in any way sedentary, as the zombie’s movement have a remorseless intent, which ratchets tension.  Yes, players can go guns-blazing, but failing to consider the child inevitably results in failure.

The game is graphically simplistic and all of the characters have blank faces.  This can be off-putting at first, but once players overcome this quirk, it allows them to imprint their own personalities on the characters, enabling players to connect with them on a deeper level.

The story is incredibly well written, perfectly portraying the relationship between a mother and child.  The mother comes across as exhausted but caring, whilst the child is sweet but never saccharine.  There is lots of background content that offers greater depth on the characters background, provided that players put in the effort to explore the world and interact with the environment.

Overall, Undying stands out from the shambling horde of zombie games to offer a surprisingly deep insight into a parental relationship.  Those looking for the next Call of Duty: Zombies adrenaline rush will be disappointed, but those after a deeper experience will be pleasantly surprised.