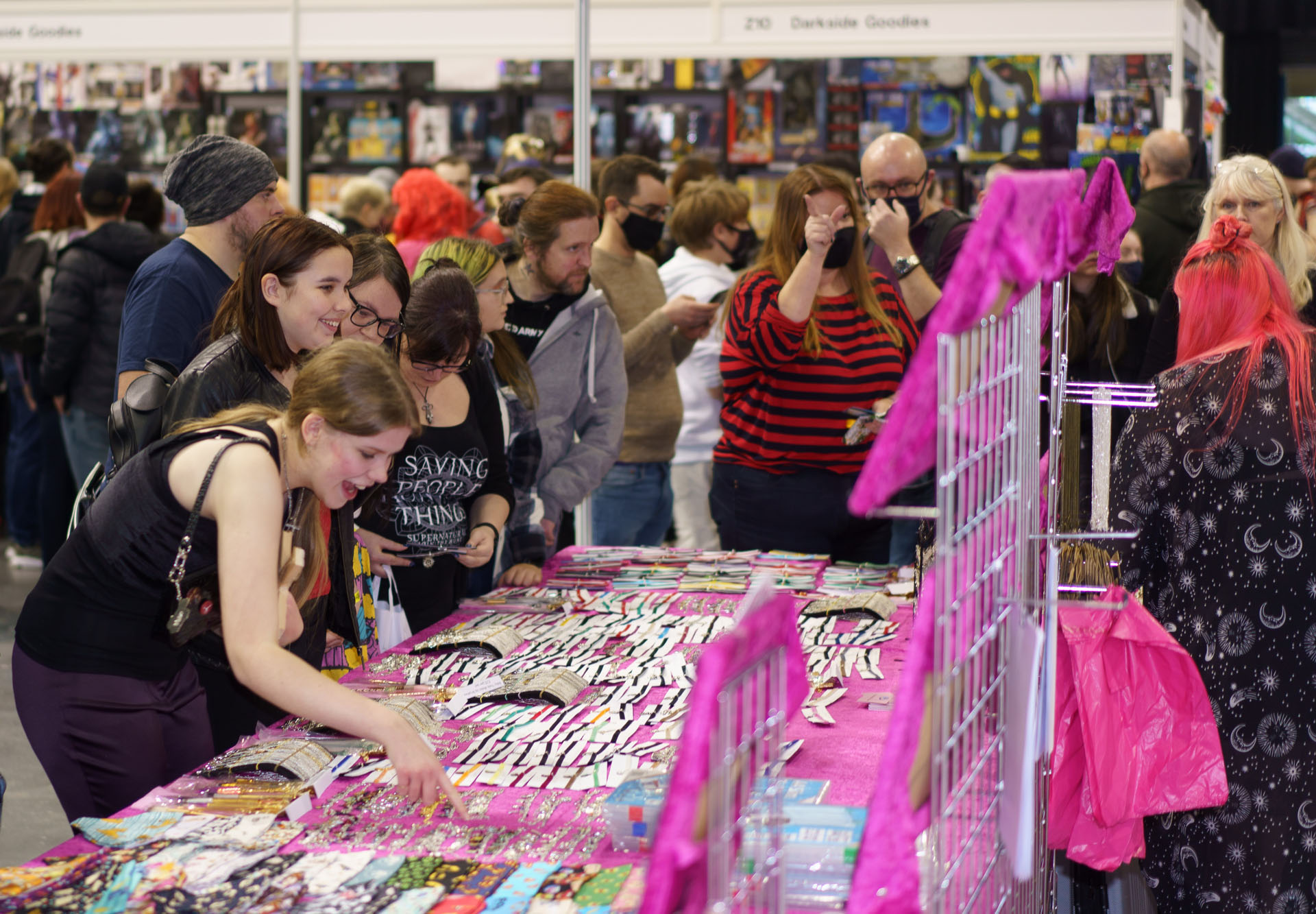 November witnessed the return of Wales Comic Con (WCC), with a new venue and a cornucopia of guests from across the length and breadth of geekdom.

2019’s WCC, at Wrexham Glyndwr University, was less than impressive (as reviewed here), so this one had a lot to make up for.  It delivered in spades.

The guests were, of course, the big draw of the day. They included such names as Edward James Olmos and Mary McDonnell from Battlestar Galactica.  However, for some, it was the chance to meet Denis Lawson (Wedge Antilles from Star Wars) and James O’Barr (writer and artist of The Crow graphic novel), that was the draw.

There were some unfortunate cancellations, such as Evangeline Lilly, due to filming demands.  However, given the number of guests that WCC was hosting, this was to be an expected risk.

Throughout the weekend there were a variety of opportunities to meet the guests, such as through signings and photo opportunities, as well as a series of Q&A panels.  However, much of the focus was on the actors, with fewer opportunities for the other guests.  For example, despite James O’Barr’s success, he seemingly had little to do other than sign books and prints.

The biggest change to WCC was obviously the new venue, at the Telford International Centre.  Whilst moving from Wrexham to Telford meant it was no longer in Wales (the organisers dubbed it the “Telford Takeover”), it did mean that the event was both much bigger and under one roof (no walking between buildings for different parts of the event).  There was also plenty of carparking nearby, which made getting there far less stressful.

However, one thing that did not change was the huge queues, both to get in and for the photoshoots and panels.  The one to enter WCC stretched for nearly a kilometre, which saw some queuing for nearly 90 minutes before entering.

There were also a distinct lack of seating, which was particularly unfortunate for those who tire easily or wore a bulky costume.  There were limited food options inside the venue, and what was on offer was particularly overpriced.

The panels were compered by a variety of hosts, including cosplayer Tabitha Lyons (Artyfakes).  Whilst the panels were informative, they were subject to a variety of logistical issues, such as the aforementioned queues for panels held in dedicated rooms and background noise for those panels held within the halls themselves.

The size of the venue meant that there crowding was kept to a minimum (barring the queueing) and the event never felt claustrophobic.  It was most noticeable in certain areas, such as amongst the stalls and at the height of the convention (early Saturday afternoon).

There was a diverse range of stalls, from creators to merchandise, but the stalls were limited in number.  It was disappointing that merchandise stalls were in the majority.  Given the presence of James O’Barr, it would have been appropriate to have copies of The Crow on offer.

Nonetheless, WCC was a lot of fun and a welcome alternative to the formulaic MCM and Showmasters events.  If they can resolve the queuing issues and ensure a diverse range of stallholders, then WCC has the potential to be a global leader in the convention circuit.

The main question that should be always asked is if it is worth going to next time?  As Bruce Campbell will be a guest, the only answer could be: “Groovy!”

Load more
Wales Comic Con - November 2021November witnessed the return of Wales Comic Con (WCC), with a new venue and a cornucopia of guests from across the length and breadth of geekdom. 2019’s WCC, at Wrexham Glyndwr University, was less than impressive (as reviewed here), so this one had a lot...